By Christine Mitchell on September 11, 2016@Housetornado37 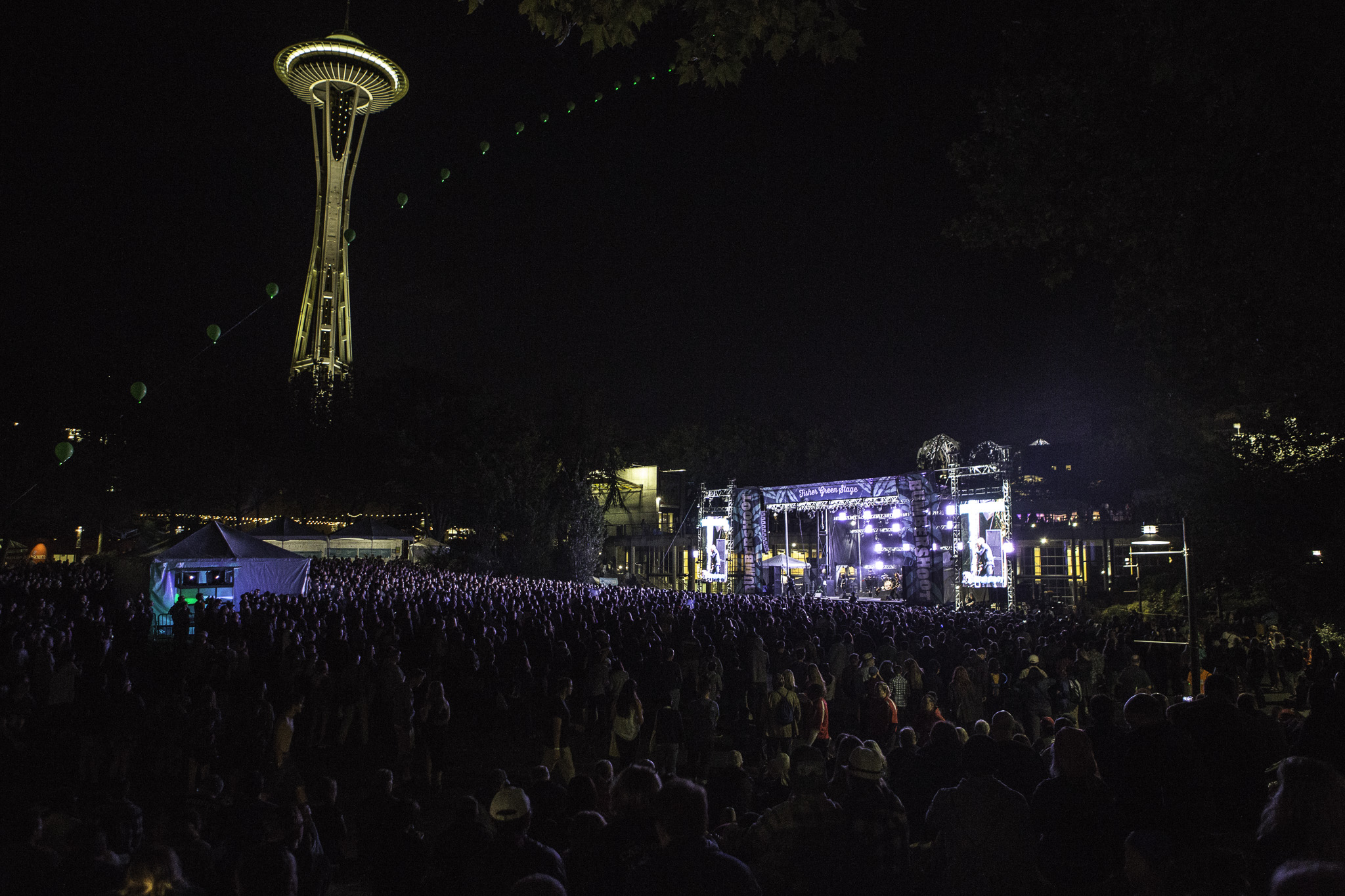 Day Three of Bumbershoot saw massive crowds and a slew of great bands for the crowds to digest. The schedule accommodated just about any palate. From fake blood during The Pink Slips’ set, to Manatee Commune’s organic EDM, or the late 90’s/early 00’s nostalgia of Third Eye Blind and Death Cab for Cutie, there was something for everyone.

Long lines continued to thwart easy entrance to KeyArena’s EDM-a-thon, but were better controlled. The KEXP stage built up a line as well, especially during Thunderpussy’s set. There were reports of 500 people trying to pack into the 250 capacity venue, and for good reason. The band’s Capitol Hill Block Party saw them playing to thousands, and their recent KEXP exposure, plus word of mouth continues to expand the band’s fanbase. If any wanderers found themselves in the crowd, they were no doubt converted as Thunderpussy’s straight-ahead rock and roll pounded through the building. Singer Molly Sides somehow made her way out into the packed-in crowd to dance with the audience. It was another killer performance.

Shaprece took to the Fisher Green stage looking and singing like an amazing angel, complete with backing choir soon after her soon to be touring compadre Maiah Manser finished her own hypnotic set at the Starbucks Stage. OUR FEMALE TALENT IN THIS TOWN IS SO GOOD, SEATTLE. So. Good.

Nostalgia kicked in hard and heavy as the sun sank into the horizon. The crowd for Third Eye Blind spilled well over the Fisher Green and onto the surrounding sidewalks. The sound of that massive crowd singing along drifted across the entire Seattle Center. But Billy Idol won the throwback crown with his no-holds barred set. Idol proved himself a commensurate, iconic performer, from his spiked, bleached hair to his insanely famous sneer. He appeared to have hardly aged as he pumped his fist and pumped up the crowd, asking “Bumbershoot to dance” during “Dancing With Myself.” Much like William Shatner has accepted that he shall forever be Captain Kirk, Idol knows he is, well, an idol. And he wears it well.

Bumbershoot is iconic itself. With another year’s festival in the books, lined up next to editions reaching back decades, it’s another marker of evolution. Of Seattle, of our culture, of us all. Bumbershoot is Seattle’s festival, and it is always a fascinating one with each step it takes.

Christine Mitchell has been poring over album liner notes pretty much since she acquired the skill of reading, and figured out the basic structure of rock songs at an early age. Whether it’s the needle popping into the first groove of the record, the beeps that signal the beginning (or end) of a cassette tape, or digital numbers ticking off the seconds from zero, music brings Christine happiness, ponderous thought, opportunities for almost scientific study, and sometimes a few tears. When she started attending live shows two decades ago, a whole new piece of the puzzle clicked in and she has been hooked ever since.
Related ItemsBarns CourtneyBilly IdolBishop BriggsBumbershootChristine MitchellDeath Cab For CutieFeatureJake HansonLisa PrankMaiah ManserManatee CommuneMaren MorrisShapreceStrangers You KnowTame ImpalaThe Pink SlipsThird eye blindThunderpussyXander Deccio
← Previous Story Saturday at Bumbershoot
Next Story → Coheed and Cambria Open Their Fall Tour at the Showbox Sodo