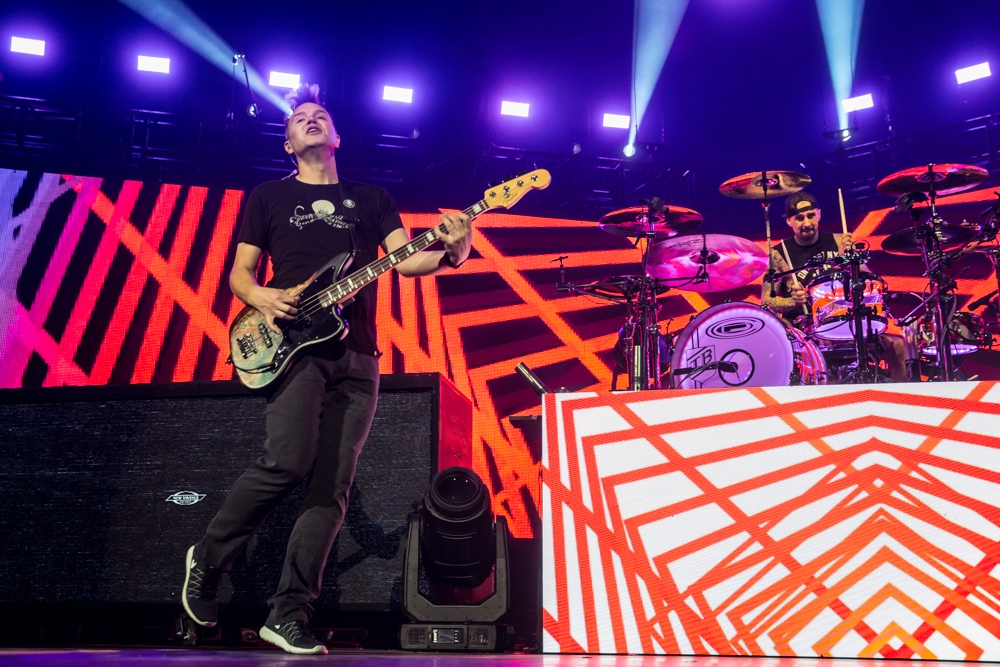 This was a show fulfilling dreams, a show to make teenage selves cry. Blink-182 – arguably harbingers of the mopey, hopeful pop-punk genre – were back. Makeups and breakups be damned, pop punk is alive and well, and the band’s North American tour is proof with sold out arena gigs. The addition of A Day To Remember, The All-American Rejects, and DJ Spider filled out Seattle’s KeyArena with a show to remember.

DJ Spider got the crowd warmed up remixing alt-rock classics from Pearl Jam and Nirvana with teeny-bopper favorites from the likes of Twenty One Pilots before TAAR took the stage with a throwback set. The moppy-haired five-piece led off with “Dirty Little Secret,” and immediately everyone was in the groove. Lead vocalist/bassist Tyson Ritter asked, “You guys wanna jump in a big ass time machine tonight? We’re gonna take you back to when you were swing swing swingin.” And so it began. The time-machine vibe of their set was absolutely the right course, and Ritter was an affable front man, noting for the sign-language translator the number of cuss words they’d be signing throughout the show. TAAR’s set was playful, bright, and got the crowd singing and swinging right along.

Next up, ADTR blew the show away. The central-Florida band hit a uniquely hard note with their blend of pop-punk and metalcore, kicking off the set with “The Downfall of Us All,” complete with an onslaught of beach balls bouncing over the crowd. A circle pit started to form, and Blink’s Travis Barker joined the band on drums for “2nd Sucks” before a guy dressed in a halfhearted chili pepper costume shot t-shirts into the crowd. “Right Back At It Again” turned the crowd into a sea of waving arms, while lead vocalist Jeremy McKinnon showed off his range.

“This is usually the part where we ask for crowd surfing, but we were told you’re not allowed to do that here. So don’t do that right now. Be safe,” McKinnon said, before they whipped out “Naivety” from latest record Bad Vibrations. Not that that stopped people. McKinnon rolled over the crowd in a giant inflatable bubble, and the crew tossed rolls of toilet paper into their enthusiastic hands. ADTR’s set was the hardest of the night, but also the most fun.

Then a black curtain fell over the stage, signaling the start of something big. The room went dark and everyone’s phones went up, fingers on the video trigger. As the curtain rose, the word “fuck” appeared, literally in flames, behind the kings of pop punk as they kicked off their set with “Feeling This.” Blink-182 has, over the course of seven albums and 20-plus years, whittled their juvenile, joyful angst to perfection.

While certainly not pushing any boundaries, the trio was able to dial right in to the anthems that originally earned them their following. And that following was present. It’s hard to imagine that twenty-somethings and their parents partying together were Blink’s original intended audience, but that’s exactly what was happening. Middle-agers in Blink’s “Genuine Crappy Punk Rock” hoodies pumped their fists right alongside of youth that were babies when Blink first came out.

While the 25-song set featured a handful of tracks off the new record, Blink kept it smartly focused on flashes from the past. Tracks like “Reckless Abandon,” “Dysentery Gary,” and the timeless “What’s My Age Again?” were what the crowd came for. After the showmanship of ADTR, Blink kept it pretty straightforward. Despite a couple of Co2 cannons, a bit of pyro and plenty of strobe light, the restless youth, the parents clearly reliving their glory days, everyone moved as one, arms raised, voices loud. While Blink might have grown up, they’re clearly still powered by the music. And an encore confetti shower never gets old.