Coheed and Cambria Open Their Fall Tour at the Showbox Sodo

By Mike Baltierra on September 18, 2016@baltierraphoto 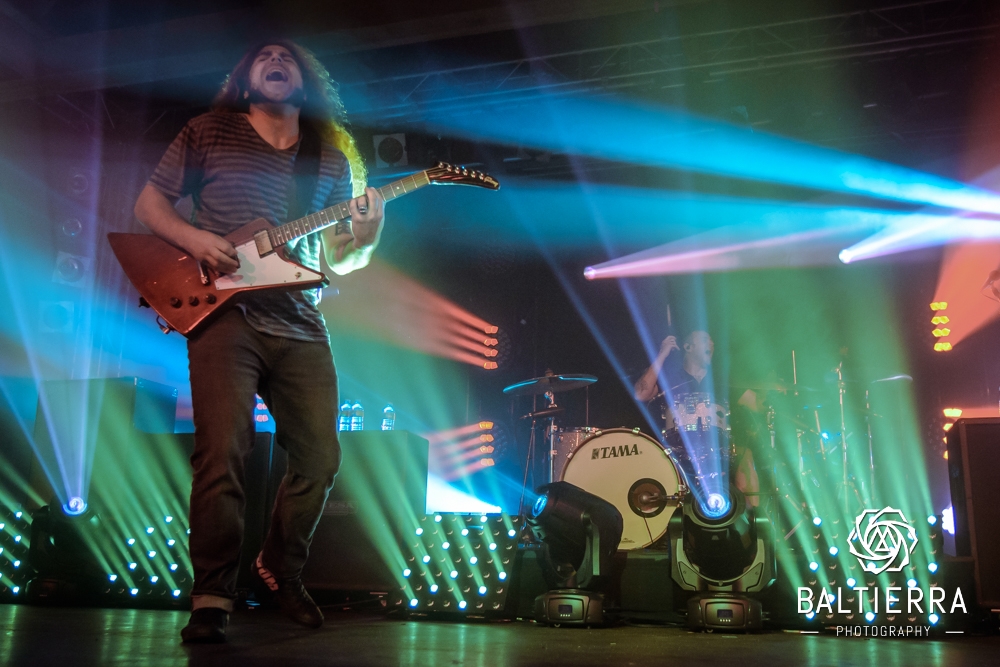 Progressive rockers Coheed and Cambria opened their North American “Deconstructed Tour” in front of a jam-packed crowd at the Showbox Sodo in Seattle.  The band’s set consisted mostly of tracks from their latest release, The Color Before the Sun, which is the band’s eighth studio album.  It’s the band’s first non-conceptual album – making it the only album not to be a part of the Amory Wars story line – as well as many fan favorites spanning throughout their entire catalog.

Coheed and Cambria (Claudio Sanchez (guitar / vocals), Travis Stever (guitar), Zachary Cooper (bass), and Josh Eppard (drums)) opened their set with “Ghost” with only Sanchez and his acoustic guitar, singing with raw emotion that caught everyone in attendance off guard. He then proceeded into the fan favorite “In Keeping Secrets of Silent Earth: 3.”  The crowd was full of energy; everyone sang “MAN YOUR BATTLE STATIONS” at the top of their lungs along with Sanchez. The large, loud crowd at times overpowered Sanchez as they sang the chorus along with him.

Without missing a beat, the band then launched into “Blood Red Summer” before weaving their way into “Island,” “Everything Evil,” “Key Entity Extraction V: Sentry the Defiant,” and “A Favor House Atlantic.”  Throughout their set, Coheed spent little time between songs, seemingly jumping from one song into the next. Coheed’s dedicated and fanatical fans started a large circle pit and began to crowd surf. With his big personality, Sanchez owned the stage like no other, belting out lyrics from behind his mop top hair. Sanchez and guitarist Stever proved why they are one of the better guitar duos as they traded lead/rhythm guitar parts back and forth. Cooper and Eppard were a tight, well-oiled machine, keeping everything rolling along as a solid rhythm section.

The band tore through their set, finishing with “Peace to the Mountain,” which had more of a pop flavor than the other songs that band had played throughout the evening.  With the crowd chanting  (yelling) “COHEED, COHEED, COHEED,” the band came out and kicked out an encore that included a cover of Nirvana’s “Drain You” and the popular “Welcome Home.” The crowd went absolutely bonkers as the band churned out the song’s very recognizable opening chord progression. The crowd sang along so loudly that Sanchez couldn’t be heard through the PA system.

Although a handful of old favorites such as “Here We Are Juggernaut,” “Running Free,” and “The Suffering” were left out in favor of new material, the show remained very strong. This show, from the song selection to the amazing lighting system, was well executed. This was a perfect testament as to why Coheed and Cambria remain a fan favorite and one of today’s best live bands.

Opening the show were Saves the Day and Polyphia.