DNCE Get Funky At The Fair 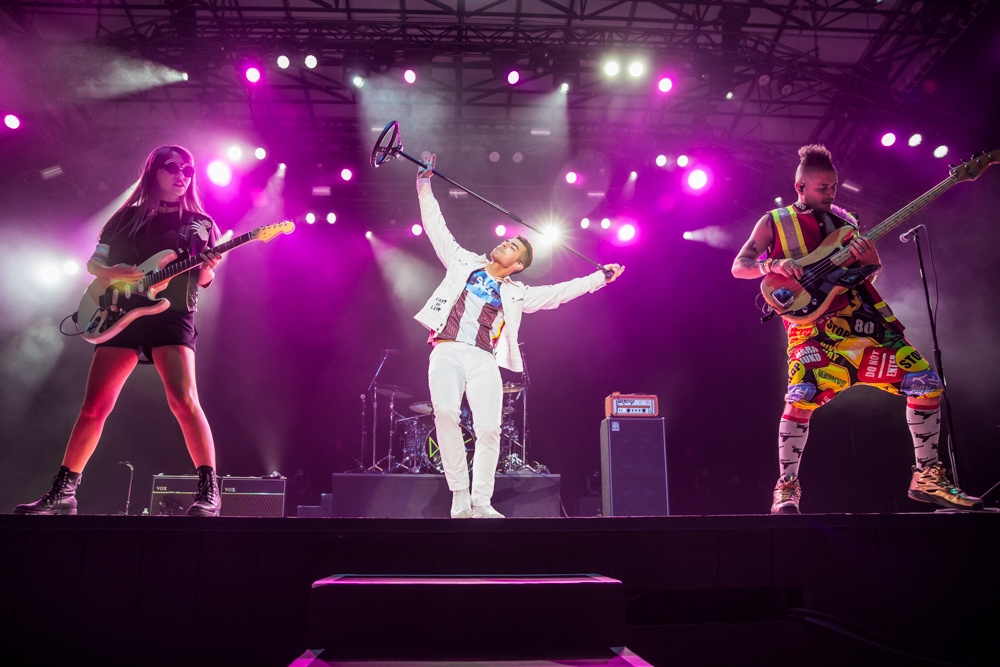 Formed only a year ago and fronted by Joe Jonas after the Jonas Brothers gave in to growing up, DNCE have been hitting the airwaves hard with their funk-pop sound. Their live shows are known for bringing out the fun, and their showing at the Washington State Fair was no exception. Does DNCE owe some of their fandom to Jonas’s youthful sex-symbol status? Of course. But he’s done well to bring on some pretty talented musicians, including guitarist JinJoo Lee (Charli XCX, Jordin Sparks, and CeeLo Green), bassist/keyboardist Cole Whittle (Semi Precious Weapons), and drummer Jack Lawless from the Jonas Brothers.

After coming on stage to the now ubiquitous Game of Thrones theme song, DNCE kicked off their set with the cheeky “Pay My Rent.” A crowd made up mostly young females held their phones up, aiming to capture the middle Jonas brother in action. This is a band that knows their sound and makes the most of it, eccentricities flying freely. The entire group kept the energy up, moving about the stage, playing to the crowd.

With their debut full-length album still yet to be released (but expected November, 2016), the band worked through their singles and a smattering of cover song snippets from Drake’s “Hotline Bling” to The Police’s “Roxanne,” and Prince’s “Kiss,” each ignited with the band’s signature sound. Jonas’s voice hit all the notes, from full to falsetto, and he kept the crowd singing along. They made an obvious point of having each member address the crowd between different songs. Mid-set Lee says “I see a lot of parents in here. I hope y’all are having a good time. It’s so hot you guys are making me sweat. I’m gonna get naked just a little bit. I hope that’s okay.” Then she hands her guitar to Jonas and removes her jacket to reveal a hot pink bra under a black mesh shirt.

She wasn’t the only one losing clothes. Whittle took his shirt off, ran down the aisle and into the bleachers, returning to the stage, he said, “I think I got married six times just now.” The band members interacted well, delivered on their sound, and pushed it to the brink of teen screams with their big hits “Toothbrush” and “Cake By The Ocean” to close out their set.

Opener LunchMoney Lewis brought his everyman vibe to the stage, a turkey-leg pin (or was it chicken?) adorning the front of his sweat suit, a drummer and keyboardist backing him up. Lewis, a talented songwriter who has garnered material for Fifth Harmony and guested with Nicki Minaj, brings a lot of novelty to his tracks, but “Bills” and “Mama” have been growing his name recognition by leaps and bounds. He’s a mix of soul, hip hop and ragtime, jazzy riffs that clearly have people interested.