Hatebreed To Perform at Studio 7

By Mike Baltierra on September 21, 2016@baltierraphoto 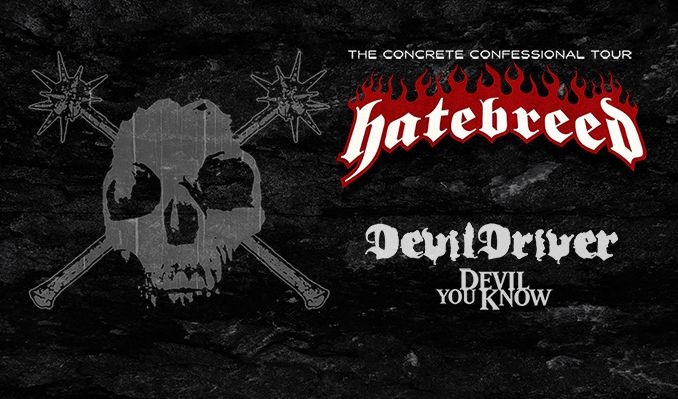 Connecticut based Hatebreed roars into Studio 7 on September 26. The band is launching a fall tour in support of their latest release, The Concrete Confessional. Hatebreed promises to bring a killer performance while delivering their brand of hardcore punk and heavy metal. “If we’re bringing the mosh to your city, we wanna see you in the pit! Thank you to everyone who made the first leg of the tour a massive success. We’re grateful to be headed back out to play a bunch of great places we haven’t been to in a while! See you this fall,” stated singer Jamey Jasta on the band’s official website http://www.hatebread.com

The Concrete Confessional is the band’s seventh studio album. It was released on May 13. It is the band’s career-highest-debuting disc, entering Billboard’s Top Current Albums chart at #13.

In a recent interview, guitarist Frank Novinec had plenty to say when asked about the band’s longevity, touring, and their increased popularity.

“We still love to play. It’s that simple. Getting up there and putting on a show is therapy for me. When I was young it was something I dreamed of but now it’s something I feel I have to do so I don’t lose my mind.”

“The influence at this point is really us. When you have been doing it so long you have to inspire yourself, I think, and that’s a good thing. It makes us focus and work hard when creating something. The Concrete Confessional charted higher in the U S than any previous release, so it was no surprise that the songs would be going over so well live. It’s been a long wait since The Divinity Of Purpose. Our fans and the audience is hungry. “

“You’re in competition with no one but yourself after you’ve been around over 20 years. The legacy of the band is so important, but keeping ourselves “current”, and not becoming “nostalgic” is key. These are the things that we keep in mind when making a new record. It’s a fine line to walk really, I think we do a great job.”

When asked about splitting up the tour into a Spring and Fall tour, Novinec stated that reason was simple: to play two full tours with the hope of hitting markets that Hatebreed hasn’t been to in a while or have never visited. “That was the plan all along. Completely cover the country with two full length tours. We haven’t played some of these towns in years or ever. It’s great to get into the small markets too. Those people deserve it just as much as anyone. We excited to be starting the tour in Southern California at Ozzfest meets Knotfest!”

When asked about the tour’s support bands, Santa Barbara’s DevilDriver and Los Angeles’ Devil You Know, Novinec went on to say that they wanted bands who are established and who are potential headliners in their own right. “Howard Jones (Devil You Know) and Dez Fafara (Devildriver) have been doing it for many years in these bands and other bands, a lot of the guys in these bands have. Brand name dudes (if you will). We wanted to put together a package that was strong, three headliners rightfully. It worked so well the first time around and was such a success and we all got along great, why not do it again?”

Catch Hatebreed, Devil You Know and DevilDriver on September 26 when they perform at Seattle’s Studio Seven. Click here for tickets.