By Mike Baltierra on September 23, 2016@baltierraphoto 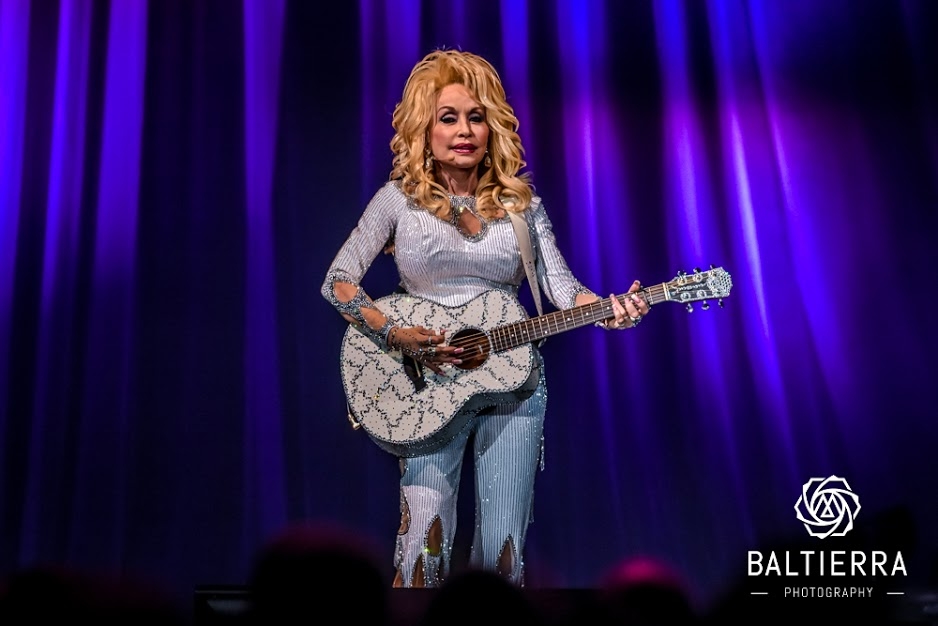 Dolly Parton‘s Pure and Simple World Tour made a stop at the ShoWare Center in Kent. The country legend kept the sold out crowd entertained with heart tugging music about growing up poor but proud in Tennessee, her Southern Charm, and humorous story telling. Stepping out from the sheer white backdrop donning the rear of the stage, performing in a white outfit that was covered in rhinestones, she sparkled as she opened her set with “Hello Dolly.”

Her between song humor and storytelling was as entertaining as her musical performance. She poked fun at her appearance, saying it “takes a lot of money to look this cheap” when introducing “Why’d You Come in Here Lookin’ Like That.” She also talked about her husband Carl and how the two recently celebrated their 50th wedding anniversary by getting married again. This led to a story about a certain “long-legged homecoming queen” who worked at the local bank who tried to steal her man, which was the perfect lead in to “Jolene”.

In between songs, Parton talked about how it wasn’t an easy road for her. She explained that immediately after graduating high school, Parton took off from her southern home to make her dreams come true in Nashville. She told of her childhood, her family of twelve children, allowing everyone in attendance a glimpse into her life with classics such as “My Tennessee Mountain Home,” “Coat of Many Colors,” and “Smokey Mountain Memories.”

She described why at 70 she was still touring (she needed the money) and when picking the name of the tour, her drummer thought he’d figured that “Pure and Simple” meant “No gaudy makeup, no wigs and no rhinestones.” She went on to say that said drummer was back at home trying to extract a five inch rhinestone heel out of his posterior. In his place: a $450 drum machine “that can do anything he can do, and it doesn’t talk back or insult me! So if you’re hearing something that you’re not seeing, that’s why!”

Parton, with her back up trio of musicians, sounded spectacular. “Banks of the Ohio” and a medley of “American Pie,” “Blowin’ in the Wind,” “Dust in the Wind” and “The Night They Drove Old Dixie Down” featured just Parton and her three musicians at the front of the stage. “Do I Ever Cross Your Mind” saw the quartet going completely a cappella.

The night was all Parton. No opening bands. Her performance was lengthy, as evident by the close to 30 song selection in her set. There was laughter, a few tears shed, and great story telling. Parton again and again showed everyone why she’s the most honored country performer of all time.

Setlist
Hello Dolly
Train, Train
Why’d You Come in Here Lookin’ Like That
Jolene
Pure & Simple
Precious Memories (John Wright cover)
My Tennessee Mountain Home
Coat of Many Colors
Smokey Mountain Memories
Applejack
Rocky Top/Yakety Sax
Banks of the Ohio (cover)
American Pie / If I Had A Hammer / Blowin’ In the Wind / The Night They Drove Old Dixie Down
The Seeker
I’ll Fly Away
Baby I’m Burnin’ / Girl on Fire
Outside Your Door
The Grass Is Blue
Those Memories of You (Alan O’Bryant cover)
Do I Ever Cross Your Mind
Little Sparrow / If I Had Wings
Two Doors Down
Here You Come Again
Islands in the Stream (Bee Gees cover)
9 to 5
I Will Always Love You

Related ItemsDolly PartonFeatureMichael BaltierraShoWare Center
← Previous Story Tears For Fears Shouts It Out In Woodinville
Next Story → St. Paul and The Broken Bones Uplift the Faithful