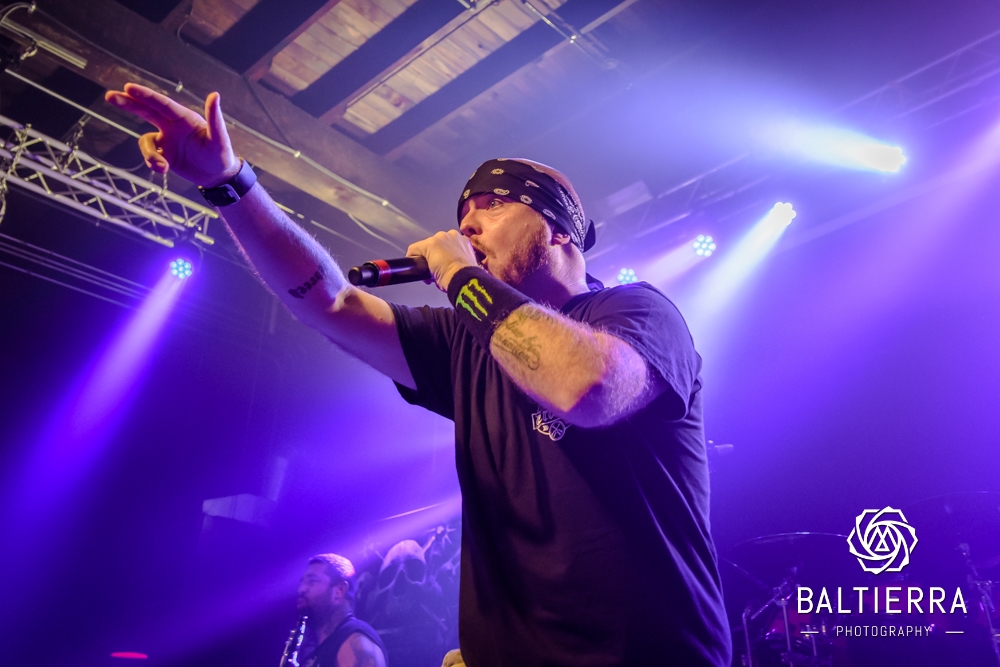 Hatebreed, an American metalcore band based out of Connecticut, brought their hard sound to a jam-packed Studio 7. The band is touring in support of their latest release The Concrete Confessional.

Jamey Jasta (vocals), Chris Beattie (bass), Wayne Lozinak (guitar), Matt Byrne (drums) and Frank Novinec (guitar) were firing on all pistons as they broke into their heavy, albeit short, set in front of a hot, sweaty, and rabid crowd, who came out to see the legends of metalcore at their finest. The band opened with “Destroy Everything” before heading into fan favorite “Looking down the Barrel of Today.” Hatebreed was relentless, with the band and crowd feeding off of each other’s energy. Singer Jasta  repeatedly demanded that the crowd form a huge circle pit, and those in attendance were more than happy to oblige. Along with the mosh pit, there were numerous crowd surfers and stage divers to keep the security staff at Studio 7 very busy.

As they perfomed “A.D.,” “Perserverance,” “Something’s Off,” and “Live for This,” Hatebreed were a massive ball of energy, bouncing and jumping around the stage. The band sounded solid and tight, and the lighting was also on point. The crowd showed their appreciation by screaming out the words, at times becoming louder than Jasta himself, leading him to put the down the mic, smile, and rock out with the band as they continued to churn out song after song.

Jasta then dedicated “Honor Never Dies” to all of American’s veterans, thanking those in attendance who may have served. As the band played, the crowd yelled “sometimes standing for what you believe means standing alone” which could give anyone goosebumps due to the emotion put into this song. Hatebreed did not slow down or let up on the gas pedal as they steamrolled into “I Will Be Heard,” “Everyone Bleeds Now,” and finishing their set with “In Ashes They Shall Reap.”

The band left the crowd begging for more, but unfortunately on this night, there would be no encore. There would only be people going home exhausted, sweaty, some broken, and most of all, very happy, having just witnessed a solid performance put on by one of today’s longest running metalcore bands.

Opening the show and providing support for the tour are Santa Barbara, CA’s DevilDriver and Devil You Know, who hail from Los Angeles, CA.