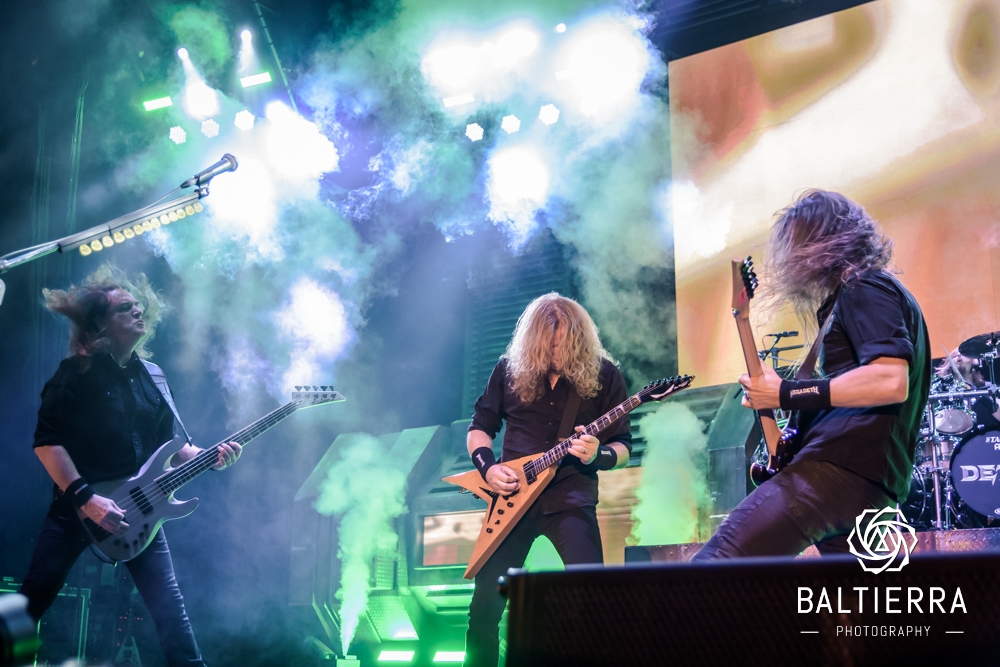 The WAMU Theater was the scene for one of the best bills out currently out on tour: Megadeth’s Dystopia World Tour. The venue was filled to the rafters with head bangers and thrashers looking forward to an entertaining evening filled with classic, heavy, thrash, crossover, Viking and groove metal – and they did not leave disappointed.

It was over 30 years ago that Dave Mustaine (vocals / guitar) founded Megadeth, taking the world by storm with their own brand of thrash metal. They have taken their place as one of the most influential as well as one of the most successful bands in musical history, racking up over 38 million albums sold, six of which are platinum, as well as many Grammy nominations. They have played to small clubs, theaters and large stadiums around the world.

As the house lights dimmed, the crowd was at an insane fever pitch as Megadeth took the stage. Along with Mustaine, David Ellefson (bass), Kiko Loureiro (guitar), and Dirk Verbeuren (drums) opened their set with the classic “Hangar 18” and proceeded to take the audience on a nineteen song history lesson of the band. Megadeth jumped into “The Threat is Real”, off their latest release Dystopia, as the song’s official video played on the large screen that draped the back part of the stage. Mustaine then spoke to the crowd, dedicating the next song, “Tornado of Souls,” to Megadeth’s former and late drummer Nick Menza, the song accompanied by an excellent display of lights and animation. As the band picked up the pace, large amounts of head banging & fist pumping could seen from many in the audience. The band proceeded into “Poisonous Shadows,” and then the classic opening track off of Peace Sells… “Wake Up Dead.”

Loureriro, the newest guitarist in the Megadeth camp, was superb in his playing, covering note for note all of the rhythm solo sections of those who have preceded him as the band’s second guitarist. He truly complemented the playing style of Mustaine. Ellefson and Verbeuren are the latest version of the band’s rhythm section, keeping everything in time. The band played many fan favorites which included “In My Darkest Hour,” “Conquer or Die!,” and “Fatal Illusion.” Mustaine did not waste a lot of time talking between songs, but did explain the story behind “She-Wolf.” which was then followed up with “Dawn Patrol” and “Poison was the Cure.”

Along with the backdrops, light show, large drum riser, and fog machines, screens throughout the stage also provided videos and animations that complimented the music very well. At times, the official video of a song was displayed on the large screens as the band played. Fan favorites “Sweating Bullets,” “A Toute Le Monde,” and “Trust” were played with the crowd singing and clapping along with the drums. The band closed out the evening with “Peace Sells” as their mascot Vic Rattlehead made his way on stage and taunted the audience, before leaving and the band finishing the evening with “Holy Wars…..The Punishment Due.”

Getting the evening started were the Butcher Babies from Los Angeles.  The band played a quick 6 song twenty minute set to get the crowd ready and to set the tone for evening.

Next up were Seattle’s hometown heavy metal heroes, Metal Church, who also performed a solid, albeit short, thirty minute set. Mike Howe (vocals), Kurdt Vanderhoof (guitar), Steve Unger (bass), Jeff Plate (drums) and Rick Van Zandt (guitar) had the crowed singing along with “Fake Healer” and “Start the Fire” before they jumped into “No Tomorrow” and “Badlands,” finishing their set with “Beyond the Black.” The band had the hometown crowd singing along with every lyric, and the crowd was begging for more, loudly chanting “Metal Church” over and over hoping for an encore.

Venice Beach’s punk/skate rock/thrash/cross over kings Suicidal Tendencies opened their set with “You Can’t Bring Me Down!,” which had the Seattle crowd singing along with vocalist Mike Muir. Suicidal, which consists of Dean Pleasants (lead guitar), Jeff Pogan (rhythm guitar), Ra Díaz (bass) and the legend himself Dave Lombardo (drums) were running and jumping all around the stage. They tore through a set that consisted of “Trip at the Brain,” “War Inside My Head,” “Subliminal,” and “Pledge Your Allegiance.” Suicidal didn’t play any tracks off of their forthcoming release World Gone Mad, but the crowd was excited and happy as the band left the stage.

As the crowd patiently waited, a giant Viking ship was rolled onto the stage, signaling the arrival of the mighty Amon Amarth. This Swedish melodic death metal band takes its name from the Sindarin name of Mount Doom, a volcano in J. R. R. Tolkien′s Middle-earth.  The band is made up of Johan Hegg (vocals),  Olavi Mikkonen (guitar), Johan Söderberg (guitar) Ted Lundström (bass) and Jocke Wallgren (drums – touring).  As Amon Amarth came onto the stage, Hegg brought a large war hammer with him, swinging it until he struck the stage floor, at which point the band launched into “Twilight of the Thunder God.”  With smoke coming from the mouth of the dragon on the bow of the Viking ship, the band brought forth a brutal set consisting of “Pursuit of Vikings,” “As Loke Falls,” and “On a Sea of Blood.” The theater, which up until now had been half full, was now packed with those who were witnessing one of the best death metal bands touring today. The band continued with their assault on the senses with “Varyags of Miklagaard” and “Deceiver of the Gods.” Amon Amarth then proceeded to thank and toast the crowd with their drinking horns as they burst into “Raise Your Horns” before ending their set with “Guardians of Asgaard.”