Emo Electronics With The Range and Phantogram 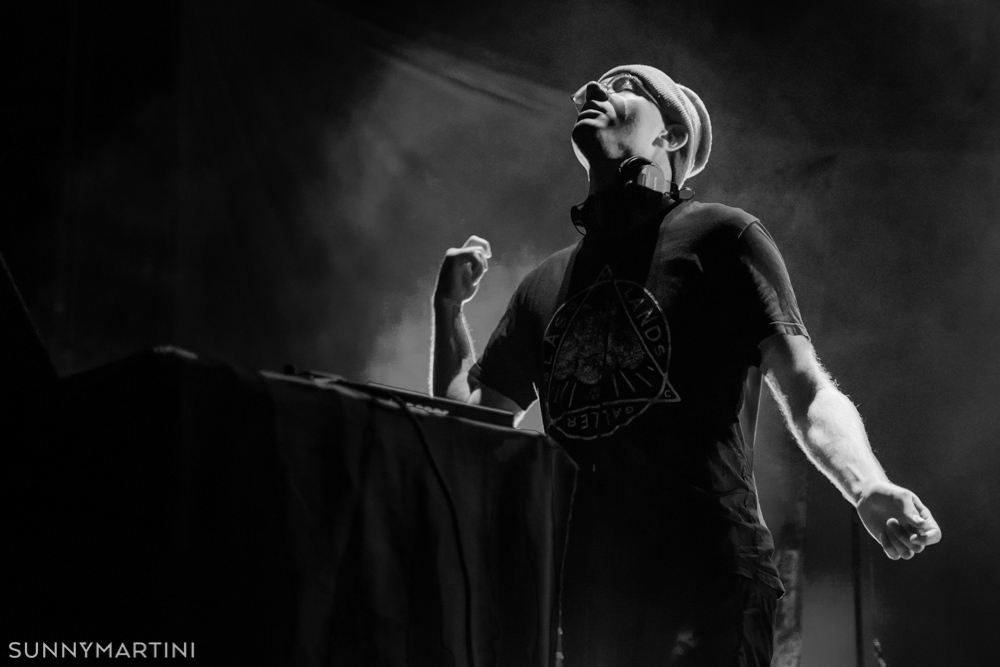 New York DJ/Producer The Range – née James Hinton – scored the tough job of opening up for electro-rock duo Phantogram, one that he made seem easy through his 45-minute set at Seattle’s Paramount Theatre. Known for incorporating raw vocals from unknowns on YouTube into his sweeping electronic soundscapes, Hinton’s set was surprisingly moving when performed live.

Flags spelling out “RANGE” stood in a semi-circle around a DJ booth at the front of the stage, and dark, sheet-covered instruments – in preparation of Phantogram’s set – lent a cave-like feel to the background. Fog blew in heavily around Hinton. There was a soaring build-up and beautiful, smooth transitions between tracks as Hinton balanced the intellectual and emotive sides of his work. He was a joy to watch, rocking out by himself, dancing, singing along for the entire set, manipulating his board of buttons and knobs in synchronicity with the tunes.

Despite the early, half-filled room, and Seattle’s oddly cool reception – people were still attentive if not overtly enthusiastic – Hinton gave an honest, connected performance that proved a perfect opener to Phantogram’s dark grooves.

By the time Phantogram took the stage, the sold-out venue had filled in, and everyone was more than warmed up to welcome them on the night of their Three album release. The set began with the band – Sarah Barthel and Josh Carter, accompanied by two others on bass/keys/percussion for the live show – behind a large, semi-transparent curtain. Graphic projections, first Barthel’s face as she sang, then cosmic displays, were the focus, a haunting, ghostly way to start the show.

After the scrim raised – four songs in – the band worked through what turned out to be a relatively short set that featured old favorites like “Black Out Days” and “Howling at the Moon” alongside fresh cuts that rang out deeper and edgier than some of their past work. During “Destroyer,” Barthel appeared on a platform in a long dark cape, flames shooting across the backdrop, smoke rising from behind her.

During “Howling at the Moon” there was a brief technical difficulty that caused Barthel to actually stop and restart the track, but they stayed on point through the rest of the set. Newer tracks featured Carter’s vocals taking more of the lead, and the crowd swayed along through most of the set. Overall, the night proved a great lineup of electronic tunes.