Ghost holds its Black Mass at the Moore Theater

By Mike Baltierra on October 17, 2016@baltierraphoto 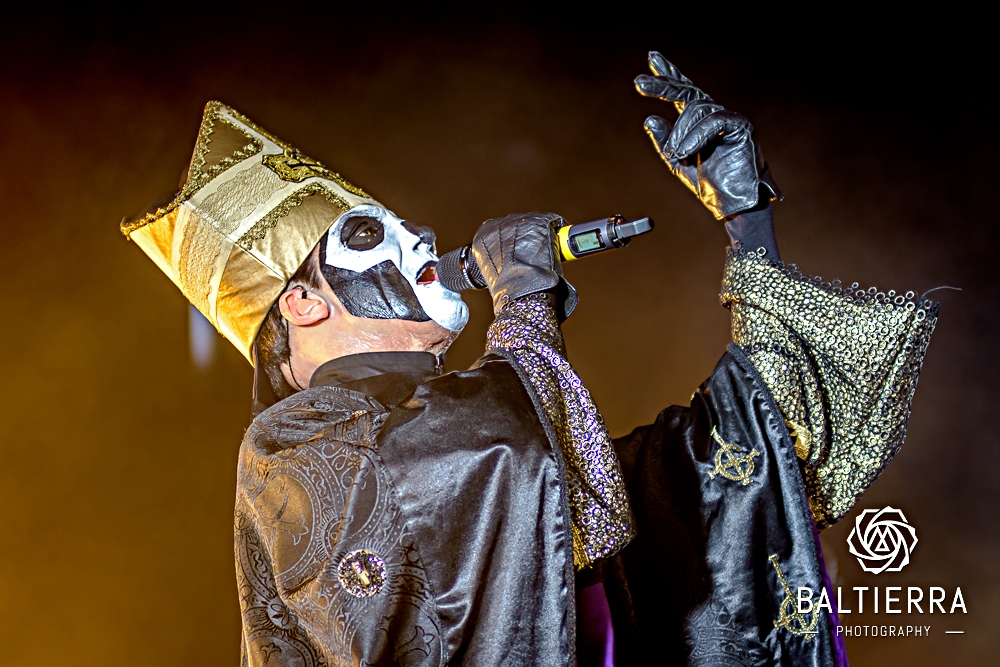 Ghost at The Moore Theatre (Photo by Mike Baltierra)

Swedish heavy metal band Ghost, who is currently on tour in support of their latest EP Release Popestar, made a stop at the Moore Theater during their Popestar North American Tour. The members of the clergy includes frontman Papa Emeritus III along with the Nameless Ghouls – Fire (aka Alpha – lead guitar), Water (bass), Air (keyboard), Earth (drums), and Ether (aka Omega – guitar). The band performed to a sold out crowd, with many in attendance wearing Papa Emeritus’ signature face paint and donning either priests or nuns outfits, and many also wearing the facemasks that the Ghouls wear.

The theater was transformed into a cathedral which, with elaborate back drops, altars, and lighting, set the mood for a dark and eerie presentation that was the perfect setup for the dark themes of the Ghost’s music. As the Nameless Ghouls walked onto the stage and launched into “Square Hammer,” the smoke was heavy and the lights blinding. Papa then came out with his trademark “demonic Pope” outfit, adorned in black and purple. The band then proceeded into “From the Pinnacle to the Pit” amidst the flash bangs that filled the theater with additional smoke and looked amazing against the “stained glass” backdrops.  “Nuns” performed communion with members of the audience during “Body and Blood.”

During back to back songs off their Opus Eponymous, “Stand by Him” and “Con Clavi Con Dio,” the papal front man hypnotized the Children of Ghost with the swinging motions of a thurible as incense smoke bellowed out from within, adding to the already smoky air due to incense holders on each side the stage.

The band interacted heavily with the crowd. Members of the audience could be seen walking up and shaking hands with Papa Emeritus. During the song “Cirice,” Papa took the hand of a female crowd member and sang “I can feel the thunder that’s breaking in your heart, I can see through the scars inside you” as if the song was written especially for her.

Ghost focused a majority of their set off the album Meliora, but there were also selections from Infestissumam and the aforementioned EP Opus Eponymous. Papa kept the crowed entertained between songs with elaborate storytelling. The band also peppered the crowd with large amounts of confetti. Inside of the confetti were Papa “bucks”, a 666 dollar bill with Papa Emeritus printed in the center. The crowd scrambled to grab one or two of these collector’s items.

The essence of the show was truly incredible. Though the band did rely on pre-recording vocal harmony tracks and keyboard fills, the sound, lighting, and theatrics were spot-on and made for a superb performance.  The evening came to an end as the band finished out their set with “Monstrance Clock.” If you are a fan of Ghost or a fan of melodic heavy metal that is heavily draped in theatrics, this show is a must see.