Bad Religion at SoDo on Wednesday 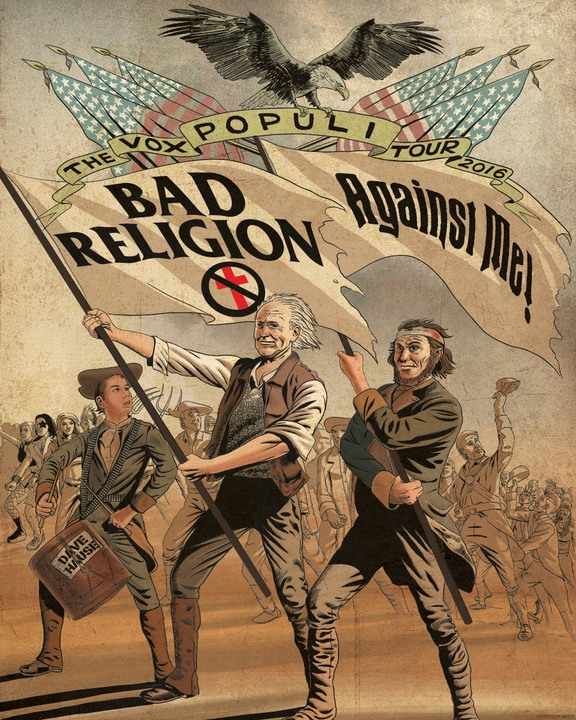 Over the past thirty years we’ve seen musical styles come and go, but one band has remained true to their musical roots.  Bad Religion has been on the forefront of politically charged punk rock since their inception in 1979.  Thirty seven years, sixteen studio albums, and countless tours later, Bad Religion has gone from a small So-Cal punk band to legends in their genre.  In this election year their biting politically charged lyrics and three part harmonies remain as relevant as ever.

Lead singer Greg Griffin has never shied away from writing lyrics about his views on politics, nature, and anything else that catches his fancy.  He’s written several books, taught a course on evolution at Cornell, and had a fossilized bird species named after him.  Somehow he still manages to find time to write songs, lyrics, and tour the world.
The band is currently crisscrossing the United States on their Vox Populi tour with fellow punk rockers Against Me!  You can catch both of these amazing punk rock acts in person this Wednesday (Oct. 26th) at Showbox SoDo.

Alex Crick is a Seattle based freelance photographer specializing in music photography. His interest in photography began as a school project in the early-90′s, when he also attended many live music shows. Eventually, he combined these two interests by conveying the power and excitement of live music through the eye of the camera. Over the years, he’s traveled all over the country photographing live musical acts. You can find samples of his work in SPIN, Billboard, Esquire. View his work here
Related ItemsAgainst MeAlex CrickBad ReligionFeatureShowbox Sodo
← Previous Story Saturday is “R” Day
Next Story → Shovels and Rope coming to the Showbox Sodo