“R” Day Parties into the night

By Christine Mitchell on October 24, 2016@Housetornado37 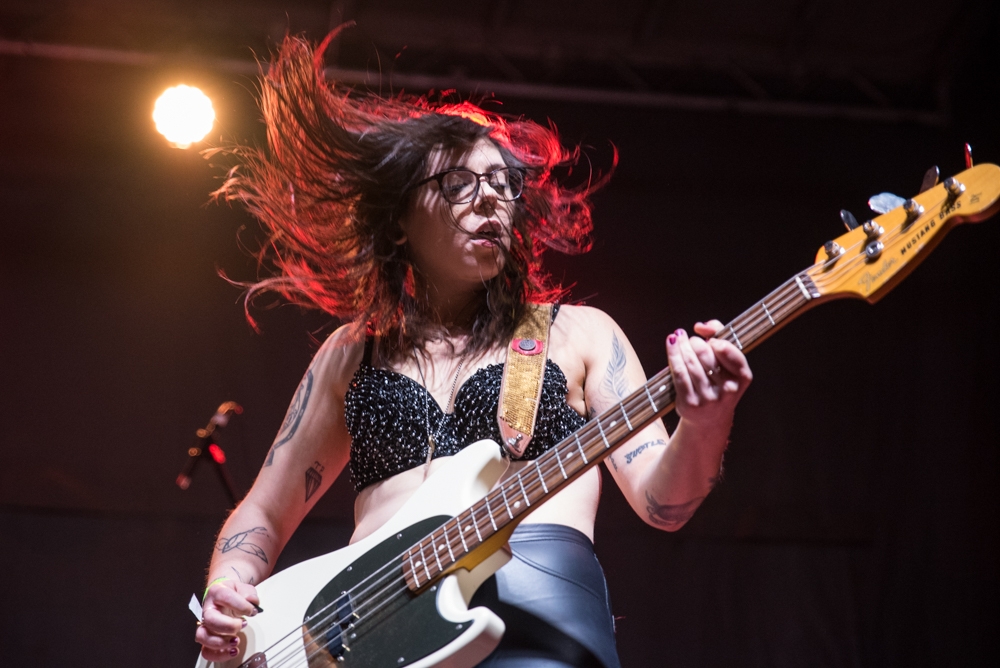 Rainier Beer knows how to throw itself a party. For this year’s free annual “R” Day celebration, sponsored by KEXP and held at the Old Rainier Brewery building, there were games and beer aplenty, along with two bands that kept the party going long after it got dark: Hobosexual and Thunderpussy. Both bands performed highly energetic sets brimming with rock and roll. Pair that with Rainier’s iconic brews and it was a recipe for an awesome shindig. October 22nd was also proclaimed “R” Day by Governor Jay Inslee, so it was a legit excuse for a blowout.

Those celebrating could drink beer while playing bean bag toss. They could play giant Jenga. They could test their skill at a climbing wall. More importantly, there were food trucks. Because, TACOS. Of course, the iconic be-legged Rainier Beer Bottles were on hand for photo opportunities, much like a Disney character but about a hundred times cooler than that. Paper “R” hats, knitted beanies, and crocheted beer can hats supplemented other various Rainier Beer wearables as far as the eye could see. There was even a successful marriage proposal! The mood was jovial as fest attendees drank both the original and new Rainier brews, served in this year’s holiday can (purple with snowflakes, very jolly).

Hobosexual was the first band of the night, and started their set off with “Sex Destroyer” off Hobosexual II. Ben Harwood’s trucker hat popped right off of his head from the get-go as he launched into the song’s main riff, and the crowd began to move. The band proceeded to crush it through the rest of their performance between Harwood’s deft guitar playing and Jeff Silva’s impassioned drumming paired with equally impassioned rawk faces. Silva’s drumhead featured the smoking, mulleted Firebird from Hobosexual’s latest (square shaped in its 7″ form) single, “Good Bad Taste.” “The Creep” was particularly hard rocking, and the crowd was soon moshing. Toward the end of their set, Harwood handed his guitar into the crowd and hopped down from the stage to play guitar with a happy lady sandwiched between the instrument and its player. The whole thing came to an end when Harwood chucked said guitar up into the air at the end of the last song. Don’t worry, it survived.

By the time Thunderpussy began to play, most everyone in the vicinity was pretty soused. So when the band launched into their scorching anti-tech song “Taking You Over,” it was time to dance. Thunderpussy, while eschewing their usual costumes a la designer Pakio Galore, made up for it with far more energy than usual, which was quite impressive considering their usual antics. Frontwoman Molly Sides spun, twisted, and whipped herself (and the crowd) into a frenzy: her hair was flyin’ somethin’ fierce. But then again, so was bassist Leah Julius’. And guitarist Whitney Petty’s. Ruby Dunphy made up for the lack of hair to toss by attacking the drums, looking like she wanted to beat the living daylights out of them.

Thunderpussy’s set has been morphing as the band incorporates new songs into their repertoire, and those new songs bring a wonderful range of highs and lows to their performance. The usual barnburners, such as “Fever,” now have bluesier foils like “The Cloud” that bring a depth of emotion that simply wasn’t present in their earlier material. The intelligent innuendo now has a new friend to play with. Sides particularly seemed to feel these songs more personally; at times wiping away a tear after one song before bringing back that thousand watt smile and diving into the next.

Once again the band wowed everyone present. T-shirts with the slogan “Grab ’em by the… Thunderpussy” were a big hit, the not-so-subtle dig at Donald Trump perfectly timed before the election. Thunderpussy is in the midst of mixing their record and they will hit the Iceland Airwaves Festival next month before a whirlwind tour of the UK. Big things are in store for this band in the coming months. Those present at “R” Day 2016 were lucky ducks to see them for free in a fairly intimate setting and to take part in celebrating a Pacific Northwest icon that has been around for 140 years. Thanks, Rainier Brewing, and see you next year!

Christine Mitchell has been poring over album liner notes pretty much since she acquired the skill of reading, and figured out the basic structure of rock songs at an early age. Whether it’s the needle popping into the first groove of the record, the beeps that signal the beginning (or end) of a cassette tape, or digital numbers ticking off the seconds from zero, music brings Christine happiness, ponderous thought, opportunities for almost scientific study, and sometimes a few tears. When she started attending live shows two decades ago, a whole new piece of the puzzle clicked in and she has been hooked ever since.
Related ItemsChristine MitchellFeatureHobosexualKEXPOld Rainier BreweryR DayRainier BeerThunderpussy
← Previous Story Last in Line starts their West Coast Tour in Seattle
Next Story → Cathedrals Concerts with Jeremy Enigk, Laura Gibsion, Tomo Nakayama, and Andrew Joslyn’s Passenger String Quartet