Slayer Brings Repentless Tour to BC

By Mike Baltierra on October 24, 2016@baltierraphoto 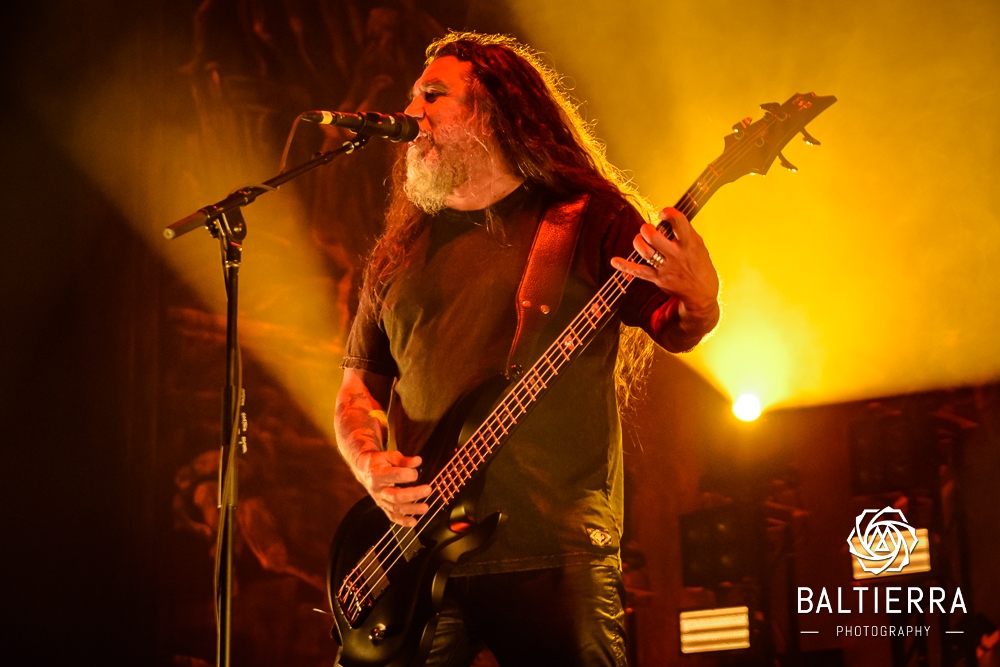 Southern California based thrash metal kings Slayer brought their Repentless Fall Tour to the Abbotsford Centre in Abbotsford, BC for a night of loud, fast and intense music that left their die-hard fans screaming for more.

Making use of large, colorful back drops, a loud sound system, huge lighting rigs and copious amounts of fog, the band had an eerie stage presence from the moment the track “Delusions of Saviour” started blasting over the PA. With the band’s logo splashing around the large screen covering the front of the stage, chants of “SLAYER” started from the rabid fans. The band started their set with the lead track off their latest album. The band wasted no time before jumping into “The Antichrist,” “Disciple,” and “Postmortem.” The band did not take any time between songs; it was just a constant barrage of pure heavy thrash metal from one of the longest reigning bands of the genre.

As the band tore through other greats such as “War Ensemble”, “You Against You”, and the classic “Fight Till Death”, they were firing on all pistons, not letting the crowd catch their breath. Numerous mosh and circle pits filled the arena floor, as well as many crowd surfers, who made their way around on top of the audience. Slayer played a cross section of material to keep their longtime fans, as well as the new generation of younger fans, happy and craving more.

King, the long running and founding member of the band with his bald head, large braided beard and chains hanging from his belt, and Holt, who replaced the late great and founding member Jeff Hanneman, led a sonic attack of heavy distorted fast riffing and piercing guitar solos. Araya, who continues to sound better and better on vocals, held the bottom end with his rumbling bass guitar. Bostaph provided excellent timing on the drums, producing some great drum fills and double kick drum action. Though only two original members remain, Slayer still delivers a devastating performance some of today’s newer up and coming bands will not be able to surpass.  Collectively, they put on a solid performance, are still dominating their genre, and are still one of the best live musical acts still actively touring.

In direct support were Anthrax, who hail from New York and are currently touring in support of their latest album, For All Kings. The band, which is made up of Joey Belladonna (vocals), Scott Ian (rhythm guitar), Frank Bello (bass), Jonathan Donais (guitar), and Jon Dette (drums – touring), who was subbing for long time drummer Charlie Benante. The band played a quick forty five minute set filled with material from their latest album as well as a few classics. The band opened their set with “A.I.R.” before launching into “Monster in the End,” “Caught in a Mosh,” and “Got the Time.” With the crowd head banging and fist pumping, the band tore through “Fight ‘Em “Til You Can’t” and “Breathing Lightning” before ending their set with “Indians,” which saw the crowd produce a massive mosh pit that filled the entire arena floor from stage to sound board. The band promised to be back with a headlining tour early next year.

Starting the evening were San Francisco Bay Area thrash legends Death Angel. The band played a fast thirty minute set that included material off their debut album as well as their last couple of offerings. Though the set was quick, the band was exceptional and left a lasting impression on those who may not have heard of or experienced Death Angel live. The band, which consists of Mark Osegueda (vocals), Rob Cavestany (guitar), Ted Aguilar (guitar), Will Carroll (drums) and Damien Sisson (bass), ripped through “The Ultra-Violence,” “Evil Priest,” and “Thrown to the Wolves” before ending the evening with their latest single “The Moth” off their latest album, The Evil Divide.