10 Years in the Black Tour at the Showbox Sodo

By Mike Baltierra on October 29, 2016@baltierraphoto 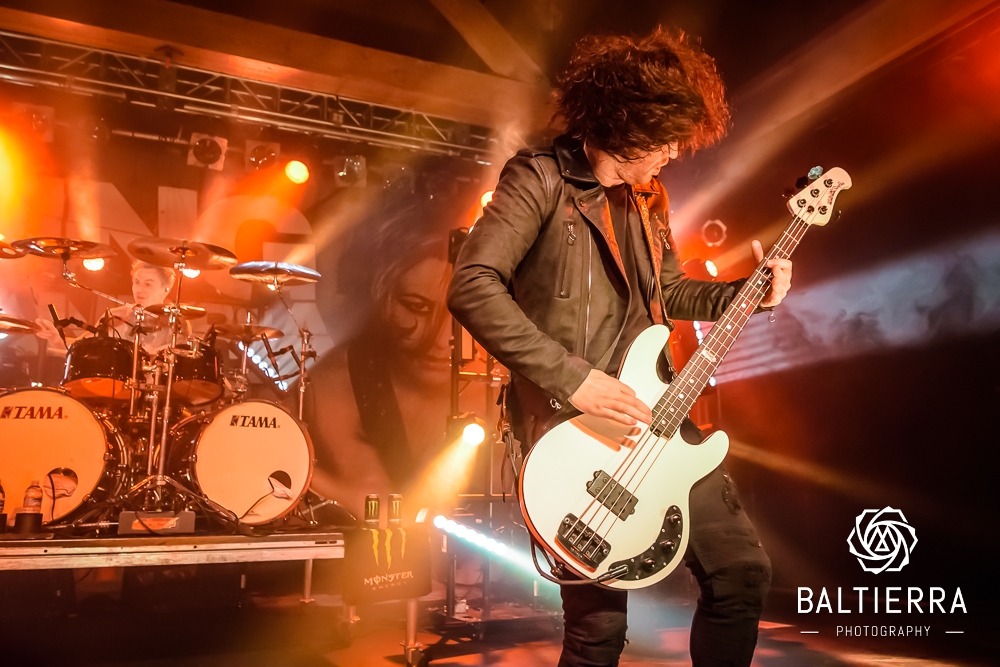 Asking Alexandria at the Showbox SoDo (Photo by Mike Baltierra)

To celebrate the tenth anniversary of Sumerian Records, some of its most established acts came together for an eight week tour dubbed “10 Years in The Black.” The first night of the tour kicked off at a near capacity Showbox Sodo in Seattle.

Headlining the tour is Asking Alexandria, who hail from the United Kingdom. The band consists of Ben Bruce (lead guitar), Cameron Liddell (rhythm / lead guitar), Sam Bettley (bass), James Cassells (drums) and Danny Worsnop (vocals), who recently reunited with the band after a brief split. The band played a thirteen song set list, consisting of material spanning off of their entire catalog, except their latest album The Black, which was recorded with Denis Shaforostov (aka Stoff). Stoff briefly replaced Worsnop and recorded vocals on The Black.

As the house lights dimmed, the crowd began chanting “Danny! Danny! Danny!” anticipating the return of Worsnop. The intro track “Welcome” played over the sound system. The band then made their way onto the stage, much the delight of the large crowd. Fans went absolutely crazy when Worsnop finally made his way onto the stage and the band tore into “Dear Insanity,” with Worsnop taking his rightful place at the microphone.

With the audience now singing, bouncing and crowd surfing, the band fed off of the energy of the crowd. The band then proceeded to play “To the Stage,” “Dedication,” “Someone Somewhere,” and “Run Free.” Bruce, Liddell and Bettley ran around and interacted with their fans, smiling faces on each of the band members’ faces. They genuinely enjoyed being together on stage, playing to their loyal fans.

Though the band’s material was mostly comprised of songs off of Reckless & Relentless, the band also played a good selection of material off their albums Stand Up and Scream and From Death to Destiny. Such songs as “Run Free,” “Death of Me,” “A Prophecy” and “Not the American Average” had the crowd happily singing along with Worsnop. Judging by all of the crowd surfing and large circle pit, one could see that the crowd was more than pleased with the material that band had decided to play. The band finished out the evening with “The Final Episode” and “A Single Moment of Sincerity.”

Also on the bill were Sumerian Records label mates Born of Osiris, I See Stars, After the Burial, Upon a Burning Body, and Bad Omens. Despite some first night set up glitches, each band performed stellar, albeit short, solid and heavy sets that kept the crowd very well entertained.