Monsterwatch: Wild at The High Dive

By Christine Mitchell on October 29, 2016@Housetornado37 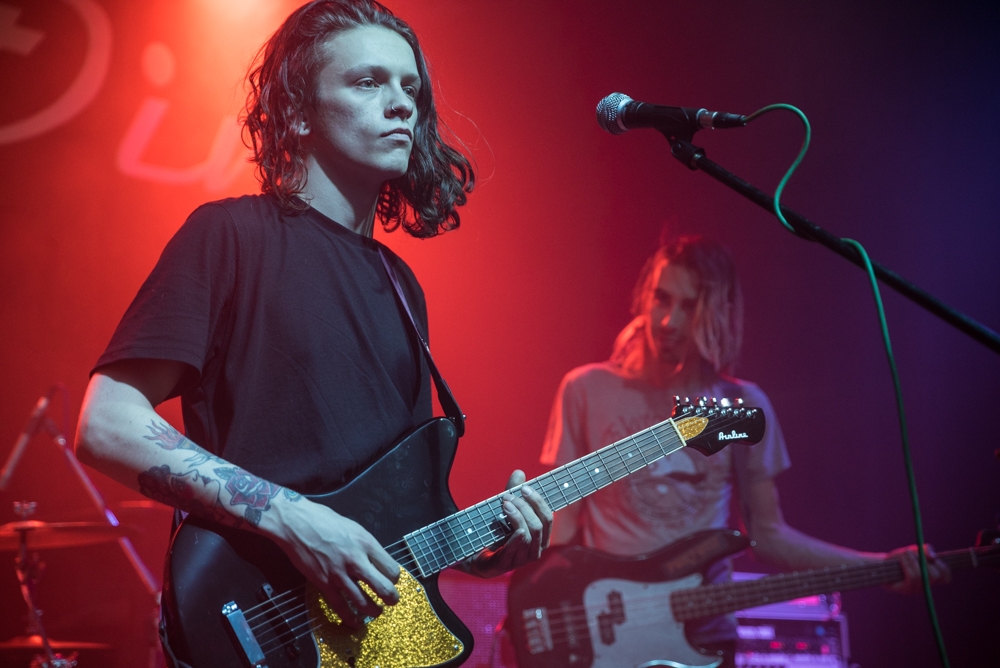 Monsterwatch at The High Dive (Photo by Christine Mitchell)

Fremont’s High Dive has been booking some off the chain shows lately, and last Friday’s Monsterwatch show was no exception. The punked out band put on a high energy show that was backed up by solid performances by Asterhouse, The Western Red Penguins (aka TWRP), and Gibraltar. A healthy sized, interested local crowd was in attendance and gave their undivided attention to the music.

Asterhouse’s indie-rock set was awesome from the get-go. Vocalist and drummer John Thornburg deftly switched his focus between his two duties, sometimes performing both at the same time but never letting up on his passionate delivery of either. At one point he even took up an acoustic guitar. Meanwhile, Russ Thornburg’s wheelhouse is in his guitar playing. Russ’ delivery was highly theatrical, matching John’s emphatic emotion with multiple jumps and hair thrashing. The push and pull between the two brothers was fascinating to watch, and their between song banter was filled with sibling ribbings. Meanwhile, bassist Julio Posada stolidly played his instrument to perfection as he chose to stand away from the limelight, his eyes shaded by a woolen earflap hat. The band rocked the song “Sweet Fragile World,” which was recently released in video form.

TWRP (pronounced “twerp”) was up next. This local band has been playing for over four years now, and they’ve aged well. A good percentage of the Fremontian crowd seemed to be in tune with TWRP, dancing along to the band’s songs and mouthing all of the words. There was a slight twang of country at times during an otherwise mid-tempo rocking set. The music was fairly complex owing to the four musicians on stage and their various instruments.

Gibraltar is another band that has stood the test of time (and a couple of lineup changes), and on this night they seemed more cohesive than ever. Which was perfect, since they were set to head into the recording studio the very next day. The band’s sound is heavy, yet melodic due to the addition of perfect keyboard work by Holly Houser. New-ish bassist Gwen Stubbs (Blood Drugs) head banged along with front man Aaron Starkey like no one else was watching. The band seemed to pull into itself during each song, coming to itself from time to time with friendly between song banter. Gibraltar was brought back on stage for an encore, and played a great cover of The Smiths’ “Please, Please, Please Let Me Get What I Want.”

After three exemplary performances, Monsterwatch had a lot to live up to. And they destroyed the bar set earlier, from their driving punk noisegasms to their explosive delivery. Frontman John Spinney was a tornado of energy, whether he was screaming into the mic, stealing his bandmates’ hats, getting licked by his bassist, flying sky-high up to the ceiling off of an amp stack, or flailing around on the floor at the crowd’s feet. The propulsive, heavy assault of sound energized both Spinney and the crowd, who danced their asses off, all herky-jerky, as if they were being beaten up by some unseen force.

Monsterwatch also played a cover, albeit an obscure one: English 70’s punk band 999’s “Inside Out,” which suited them perfectly. The band ended their set with a seemingly spent Spinney splayed out on the stage. It was a cathartic end to a blissfully intense night.

Christine Mitchell has been poring over album liner notes pretty much since she acquired the skill of reading, and figured out the basic structure of rock songs at an early age. Whether it’s the needle popping into the first groove of the record, the beeps that signal the beginning (or end) of a cassette tape, or digital numbers ticking off the seconds from zero, music brings Christine happiness, ponderous thought, opportunities for almost scientific study, and sometimes a few tears. When she started attending live shows two decades ago, a whole new piece of the puzzle clicked in and she has been hooked ever since.
Related ItemsAsterhouseChristine MitchellFeatureGibraltarMonsterwatchThe High DiveThe Western Red Penguins
← Previous Story Black Rebel Motorcycle Club: Moody in Seattle
Next Story → 10 Years in the Black Tour at the Showbox Sodo