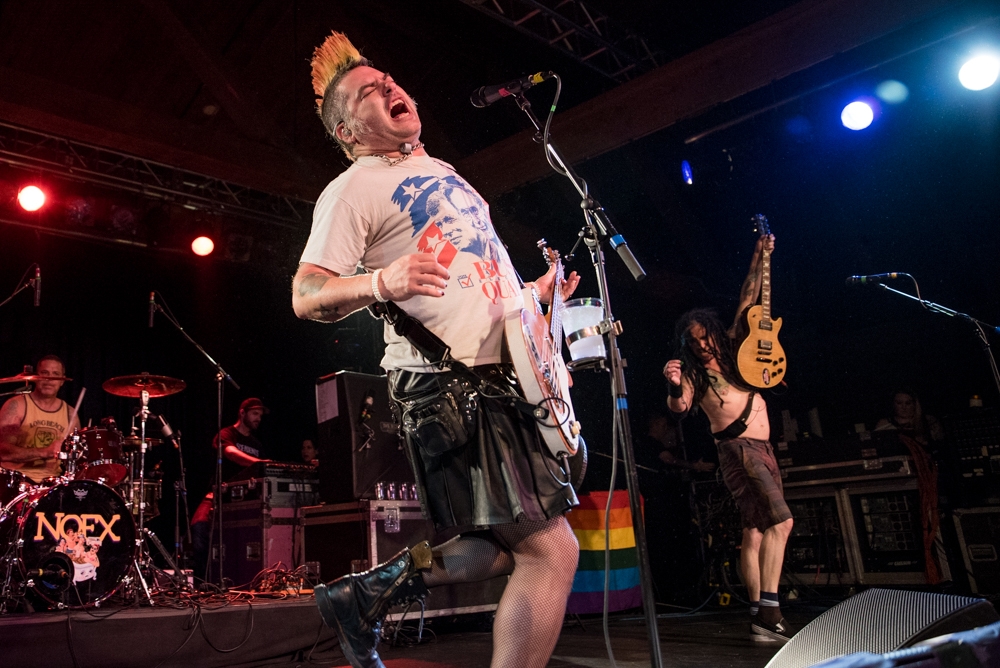 NOFX at The Showbox SoDo (Photo by Christine Mitchell)

Tuck your jeans into your Doc Martens and spike your hair with Elmer’s Glue and egg whites! NOFX filled the stage with sarcasm and sobriety last Thursday at the Showbox SoDo. They arrived in Seattle for the second day of the First Ditch Effort tour, NOFX’s 13th album, which was released in early October.

Opening the night was Useless ID. They made the noise of early 90’s skateboard VHS tapes, making me want to grab my old board and skate down the sidewalks of San Diego while rocking my Walkman and roughing up So-Cal suburbs. They sounded like The Offspring’s offspring with an upper habit. So essentially, I loved the nostalgia and so did the 50year-old mothers lip-synching in the bar.

Second to the stage was Pears. The band’s stage presence alone transported me to a time when punk was unsafe, filled with adrenaline and aggression. But that was right after they took the stage to the theme of Family Matters. Frontman Zach Quinn commanded the microphone with an attitude found in The Dwarves and fueled by Jello Biafra from the Dead Kennedys, jumping, stomping, and lying on the ground with his back arched from screaming too hard.

The icing on the cake was when Pears covered “Judy was a Punk” by the Ramones. It probably made Joey and the boys feel even more dead, what with the speed Pears played it. The song seemed to be over in less than a minute. Truthfully, I was compelled to buy a cd and t-shirt, plus go home to join their fan club. Yes, I liked Pears a lot. They are more than just a special fruit!

With a tall bleached and dyed mohawk and a leather kilt, NOFX finally arrived at the stage, making the announcement that they had changed the set list to include songs they haven’t played in six or more years. Appropriately opening up with “Dinosaurs Will Die,” Fat Mike bragged about how he is not quite yet 50 years old. After finishing up their opening song, El Hefe asked if there were any teenagers in the audience, and half the crowd went wild. Then Fat Mike replied with “Go home, that’s stupid! Don’t you know that Punk Rock is for middle-aged alcoholics!” prompting the crowd to go insane as the band jumped into their 15-second hit “Fuck the Kids.”

The boys had no apprehension explaining they would more than likely fuck up every song. Not because of how long it has been, but because they “suck as musicians.” Once again, another reason why punk rock is so damn pure; do not expect anything else but passion, sarcasm, and rage!

Even though the entire band is sober, they still played as if they were having the time of their lives. They did not get “preachy” about their recent life decisions but continued to perform songs with intention like “Murder the Government,” “The Brews,” “72 Hookers,” and an all-time crowd favorite, “Bob.” The set list consisted of mostly songs from Pump Up The Valuum and Heavy Petting Zoo but touched on a track or two from every album including their new LP, First Ditch Effort.

NOFX ended their set with “A Theme From A NOFX Album” and turned it into comedy hour, changing the lyrics up a bit but still explaining how punk rock provided them with a good life. In fact, when the song finished, Eric Melvin kept playing that damn accordion riff over and over again! Side hands and roadies could not pull him off the stage, though they wrapped a black towel around his neck and shoulders, trying to make him stop in every way possible.

As a fan of NOFX since I can remember, I feel as if I grew up with this band. It has been a pleasure listening to them “grow up” and evolve as human beings. They do get a bad rep for the constant changes they are going through, but I for one get stoked to hear all about it. The band has always played and wrote their songs and organized their albums with a hierarchy of integrity which is a lesson anybody could use. Way to stay active and keep the punk alive! It’s been a privilege for me!