By Mike Baltierra on November 7, 2016@baltierraphoto 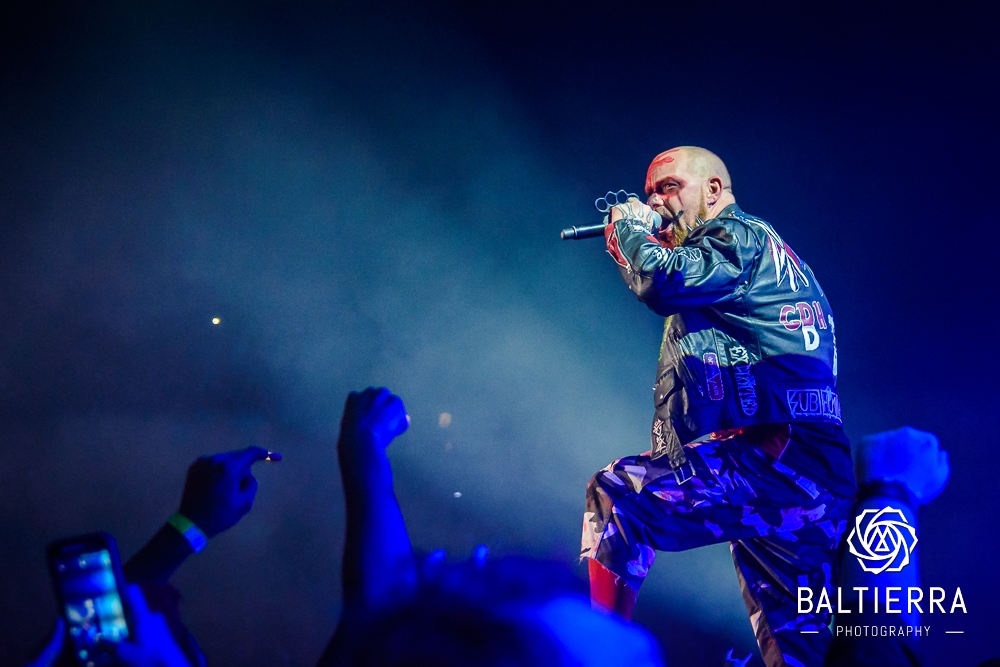 On a cold, windy, and rainy Saturday evening, the Tacoma Dome was packed to the rafters with many a metal head who came out to witness an evening of crushing heavy metal and hard rock. This evening’s concert was co-headlined by Five Finger Death Punch and Shinedown, both of which blew all of their fans away. Large scale productions filled with elaborate stage setup, pyro, and a full set list that had everyone, young and old, singing at the top of their lungs. Along with support acts SIXX:A.M. and As Lions, the evening proved to be a memorable one with close to sixteen thousand fans in attendance.

An audio clip from the movie The Network came through the sound system. The words “I don’t have to tell you things are bad. Everybody knows things are bad … But first, get up out of your chairs, open the window, stick your head out, and yell, and say it: I’M AS MAD AS HELL, AND I’M NOT GOING TO TAKE THIS ANYMORE!” were spoken, and Five Finger Death Punch started their hard hitting set with “Lift Me Up” off of their release The Wrong Side of Heaven and the Righteous Side of Hell, Volume 1 , before proceeding into “Never Enough” and “Wash it All Away.” Singer Ivan Moody, who adorned the signature war paint of the band’s mascot, Knucklehead, was not only busy belting out the lyrics, but was also very involved with the crowd, getting them to participate and sing along with him. The rest of the band, which consists of Zoltan Bathory (guitar), Jeremy Spencer (drums), Jason Hook (guitar), and Chris Kael (bass) belted out song after song. Five Finger Death Punch performed on a huge stage with a huge drum riser, large amounts of laser lights, and the band’s logo flying behind the band on a huge backdrop. The band informed the audience that they were filming the evening’s performance and they wanted everyone to get loud, rowdy, and make it the best evening on the tour. The audience responded to Moody’s request by starting a circle pit as well as crowd surfing as the band jumped into “Got Your Six” followed up by a cover of “Bad Company.”  The band not only played many of their hard hitting numbers, but also preformed mellower numbers such as “Wrong Side of Heaven” and “Remember Everything.” The band finished their solid ninety minute set with “The Bleeding.” Unfortunately on this evening, there wasn’t an encore, but there was not one person leaving this show disappointed, everyone leaving with a smile on their face.

As “Let’s Go Crazy” by Prince played through the sound system, the venue was illuminated with purple lights as Shinedown took the stage. With large amounts of pryo, the band opened their set with “Adrenaline.” The band, who are touring in support of their latest offering, Threat to Survival, were a ball of energy. Singer Brent Smith ran around the stage, hitting every note with ease. Bass player Eric Bass (yes, that’s his last name), guitarist Zach Meyers, and drummer Barry Kerch were on point, blazing through “Fly From the Inside” and “Diamond Eyes (Boom-Lay Boom-Lay Boom).” Large flames and walls of heat from the pyro and huge explosions came from above the band and the crowd was full of energy as they sang along with Smith. Many fans in front of the stage did their best to reach out and shake hands with Smith as he passed them. “Unity,” “How Did You Love,” and “Enemies” showed that the band are consummate performers. One of the many highlights of the evening was when Smith left the stage and proceeded to run around the arena. Smith showed that he is in monster shape, not sounding winded at all, and his vocals sounded just as fresh and strong as it did at the beginning of their set. As the band launched “State of My Head,” the crowd pulled out their cellphones, waving their arms as they lit up the darkened arena. The band slowed down the pace and played an awesome rendition of Lynyrd Skynyrd’s “Simple Man” with Smith proving that he has one of the most powerful voices in music, hitting ranges that would make other singers jealous of his vocal ability. The band ended their impressive set with “Sound of Madness,” which again filled the arena with more pop flashes, flash bands, and pyro.

Direct support act SIXX: A.M., who are getting ready to release the second volume of their latest release, Prayers for the Blessed, kicked off their forty five minute set with “This is Gonna Hurt.” The band formed by bassist Nikki Sixx, guitarist DJ Ashba and vocalist James Michael were joined by touring drummer Dustin Steinke and backing vocalists Melissa Harding and Amber Vanbuskirk. The band continued their nine song set, feeding off the energy of the crowd, performing “We Will Not Go Quietly,” “Prayers for the Damned,” and “Lies of the Beautiful People.” Their awesome set was capped off their performance with “Life is Beautiful” off of the Heroin Diaries Soundtrack.

Getting the evening started were newcomers As Lions, who are currently touring in support of their debut EP Aftermath.