By Christine Mitchell on November 15, 2016@Housetornado37 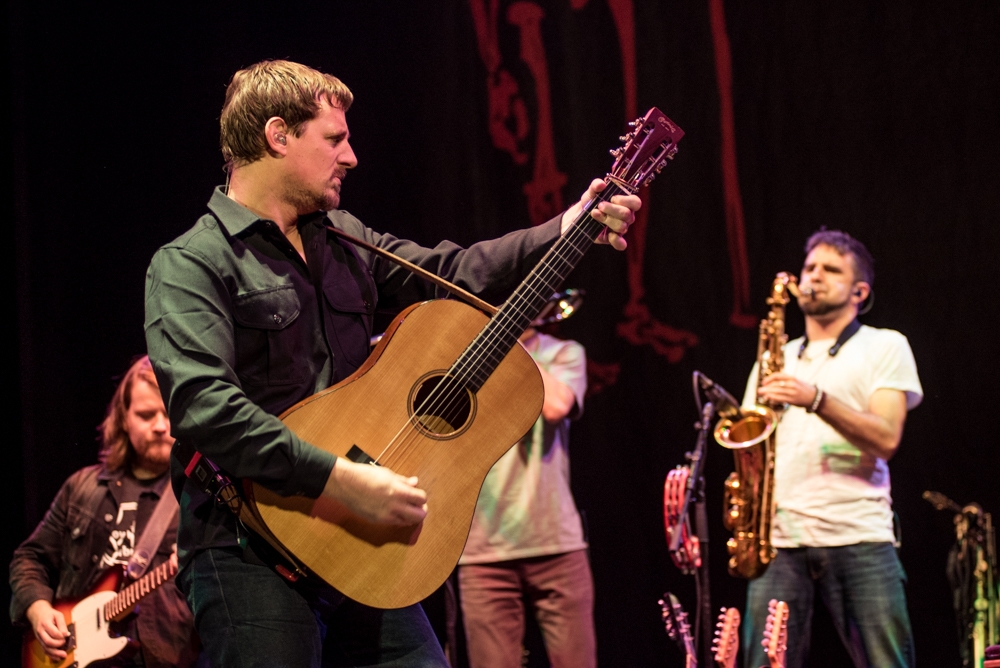 Sturgill Simpson at The Paramount (Photo by Christine Mitchell)

“I had some dark and twisted times in there,” Sturgill Simpson said of Seattle’s erstwhile Funhouse venue (a new iteration is now located next to El Corazon). And it makes you wonder, when Simpson sings that “he met the devil in Seattle” in the inward-looking “Turtles All The Way Down,” whether or not it was in The Funhouse that such a thing happened during the time that he lived in Everett. Perhaps it was. But all of that is history.

Simpson now resides in Nashville, Tennessee, and his third record, A Sailor’s Guide To Earth, is dedicated to his young son. Indeed, it reads as a manual of what to do and what to avoid in life, in chapter form, song by song. It hangs together so well that Simpson and his band played the album in its entirety during a generous two hour set at The Paramount last Friday.

Simpson’s music may most easily be described as country, but over time it has evolved into something less pigeonholed. High Top Mountain started things off more firmly in the country vein, while Metamodern Sounds In Country Music infused solid doses of psychedelia and guitar feedback. Both of these albums were well represented during the front end of the show, the former leading the night off with the rollicking “Railroad of Sin,” and the latter supplying a clutch of favorites such as “Living The Dream” and “It Ain’t All Flowers.”

A Sailor’s Guide To Earth makes liberal use of brass instrumentation, which has pushed the country envelope even more, which isn’t necessarily a bad thing but takes a little getting used to. It was a bit jarring to hear the addition of horns to older songs. Thankfully, every musician in the Simpson troupe is fantastically gifted, which was evidenced by multiple solos and band jam opportunities. Lead guitarist Laur Joamets made the feat of making his electric guitar sound like pedal steel look simple, and his playing was completely fascinating to watch. Bobby Emmett was just as arresting at the keyboard/organ/synth, at times looking as if he were taking a transcription of the band’s music rather than joining in with his own instrument.

The crowd ate up every second of the lengthy set, drinking in the sound and singing along to most every song, jamming along with the band’s Zeppelin-esque cover of “When The Levee Breaks.” Simpson’s voice was mind-bendingly incredible. It is undeniably the most country thing about his music, yet it, too, transcends any labels. As the second half of the set ended with “Call To Arms,” which also closes out Sailor’s Guide, Simpson dumped his guitar on the floor, fell to his knees, and coaxed feedback from the snarl of pedals and knobs in front of him. He suddenly stopped, walked off, and the house lights came up. Nothing more was needed.

NYC based rock band The London Souls led the night off with a fervently passionate set. Singer/guitarist Tash Neal played his instrument as one possessed while trading singing duties with drummer Chris St. Hilaire. Their songs were hard hitting and full of sexual energy, inspiring the crowd to groove along. Interested parties should check out Here Come The Girls, the band’s latest release.

Christine Mitchell has been poring over album liner notes pretty much since she acquired the skill of reading, and figured out the basic structure of rock songs at an early age. Whether it’s the needle popping into the first groove of the record, the beeps that signal the beginning (or end) of a cassette tape, or digital numbers ticking off the seconds from zero, music brings Christine happiness, ponderous thought, opportunities for almost scientific study, and sometimes a few tears. When she started attending live shows two decades ago, a whole new piece of the puzzle clicked in and she has been hooked ever since.
Related ItemsChristine MitchellFeatureSturgill SimpsonThe London SoulsThe Paramount Theatre
← Previous Story The Head And The Heart Feel Like Family
Next Story → Future of rock and roll is in good hands in Seattle