By Mike Baltierra on November 21, 2016@baltierraphoto 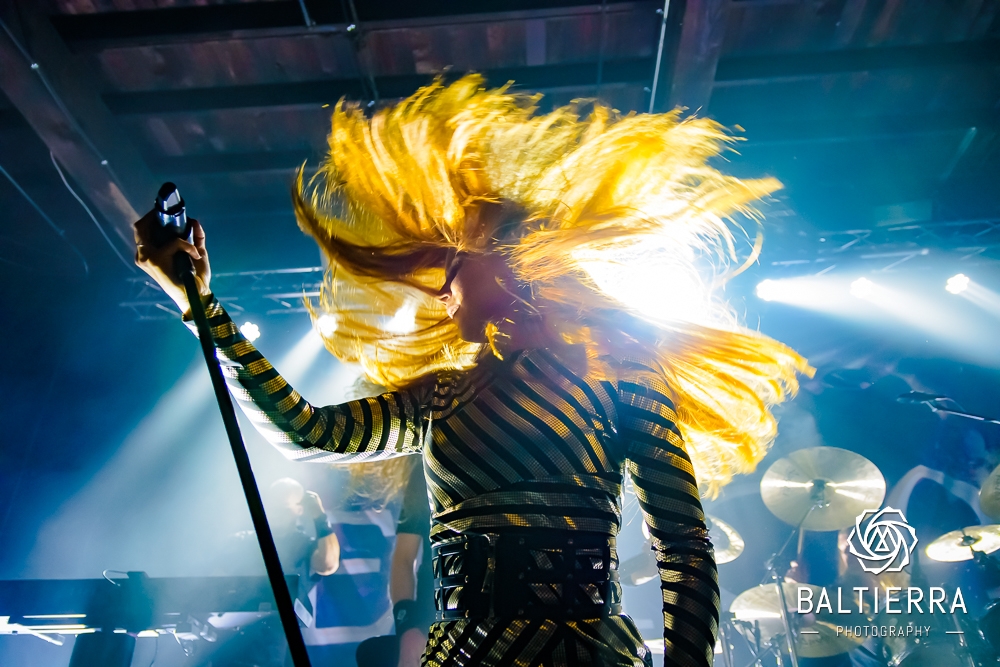 Dutch symphonic death metal band Epica made a stop at Studio Seven in Seattle during their Holographic Principle World Tour. The venue was packed to the rafters, many having seen the band multiple times, and some seeing them for the first time. One thing that everyone could and did agree on, is that Epica looks, sounds, and performs amazingly well live.

With the bright stage lights flashing and the stage covered in fog, one by one the band made their way to the stage to a thunderous roar from the crowd. Epica filled the stage with large amounts of gear. The back line was filled with keyboards, drums, amplifiers and huge lighting rigs.

Guitarists Mark Jansen and Isaac Delahaye, bassist Rob Van Der Loo, drummer Arien Van Weesenbeek, and keyboardist Coen Janssen made their way onto the stage as “Eidola” came over the sound system, filling the venue with built up tension. Singer Simone Simones then made her way on stage to a massive roar from the crowd as the band launched into “Edge of the Blade.”

Without pausing to come up for air, Epica continued with “A Phantasmic Parade.” The band’s lighting and sound production were top notch. As the lights flashed and the band rocked, each member head banged. Jansen, Delahaye and Van De Loo changed positions on the stage often during the set. When not singing, Simones would whip her hair to the rhythm of the drums as well as to the timing of the flashing strobe lights.

The band focused more of their set off of Holographic Principle, but they did play tracks from throughout their catalog. “Sensorium,” “Storm the Sorrow,” “The Essence of Silence,” “Unchain Utopia,” and “Design Your Universe” were performed with much fanfare.

The set was a non-stop barrage of pure metal with exceptional performances and awesome vocals. There was not a single person in the crowd who were not either singing or head banging along with the music.  At the end of Epica’s set, the crowd was chanting that they wanted more. The band delivered with “Sancta Terra,” “Beyond the Matrix,” and “Consign to Oblivion.”

Supporting acts on this tour are Fleshgod Apocalypse, Arkona, and The Agonist.