By Christine Mitchell on November 22, 2016@Housetornado37 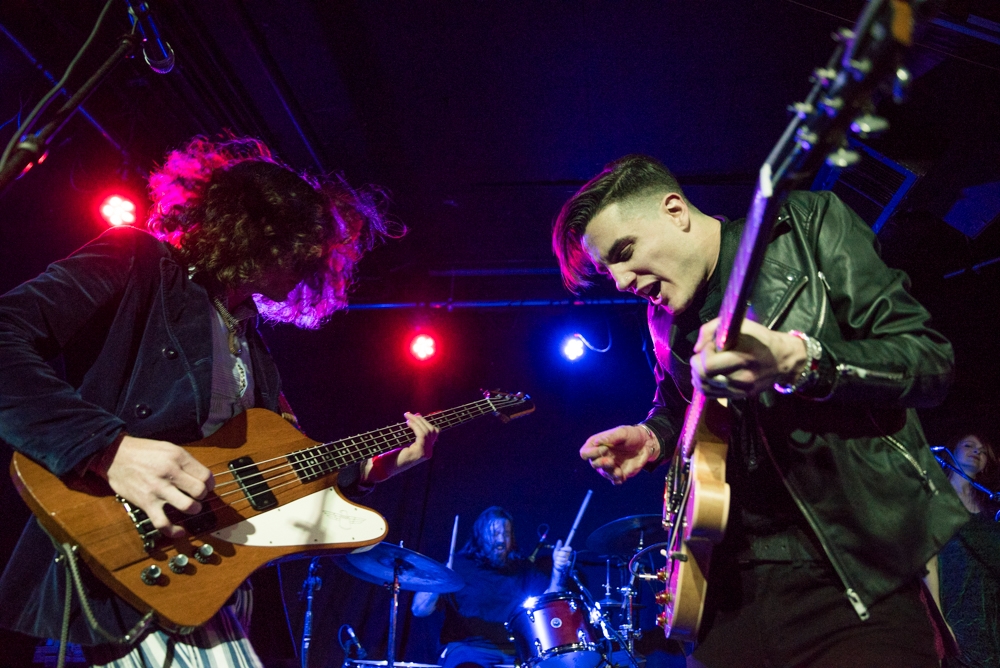 Duke Evers released their first full length album Velvet Hips with a show at Chop Suey that drew a large crowd that danced, sang along, and yelled out for an encore. The trio was treated to a couple rounds of shots during their intense set that included many tracks from the new release that have been part of Duke Evers’ set for a while. But these tracks felt new due to the addition of backup singers onstage at times and also vocal effects on singer/guitarist Josh Starkel’s voice. “Chelsea” and “Shake It Down,” both sexy as hell on their own, were ratcheted up a few notches with the addition of Starkel’s suggestive dance moves.

Now that bassist/keyboardist Dune Butler has spent some time in the group, it’s easy to see how indispensible his contribution is, and it’s more than just a fully fleshed out sound. Butler adds a great push and pull dimension onstage, his interactions with both Starkel and drummer Kyle Veazey making the whole dynamic a lot more fun and interactive in general. Veazey is the perpetual ray of sunshine during Duke Evers’ live sets. It doesn’t matter how much Starkel and Butler thrash, Veazey thrashes right along with them with perfect timing and a smile of serene happiness and joy the whole time. It’s infectious.

The crowd had already been jazzed up by Fauna Shade, who put on another mesmerizing performance that was par for the course for the band but always utterly beloved by the crowd. Scotty Smith’s face-pulling is starting to meet its match in the form of bassist Derek Johnston’s trancey, splayed-out dance moves. Smith would yowl into the mic, eyes wide and crossed, and Johnston would grin like a mental patient, tossing his body around like a puppet on jerky strings. “Bazzle Shabazz” continues to get the crowd all abuzz, and “1973” was hazy and wonderful to hear and see funneled through the band’s literal foggy ambiance.

The Hollers put on their own emphatic, straight ahead rocking set. Frontman Trevor Boone sang and played his guitar animatedly, canvassing the stage and his other bandmembers. Opening act Tekla slowly warmed up the room with her country-tinged folk.

Christine Mitchell has been poring over album liner notes pretty much since she acquired the skill of reading, and figured out the basic structure of rock songs at an early age. Whether it’s the needle popping into the first groove of the record, the beeps that signal the beginning (or end) of a cassette tape, or digital numbers ticking off the seconds from zero, music brings Christine happiness, ponderous thought, opportunities for almost scientific study, and sometimes a few tears. When she started attending live shows two decades ago, a whole new piece of the puzzle clicked in and she has been hooked ever since.
Related ItemsChop SueyChristine MitchellDuke EversFauna ShadeFeatureTeklathe hollers
← Previous Story Steel Panther Performs at a Sold Out Showbox SoDo
Next Story → Leava: Glum Hilarity