Steel Panther Performs at a Sold Out Showbox SoDo

By Mike Baltierra on November 22, 2016@baltierraphoto 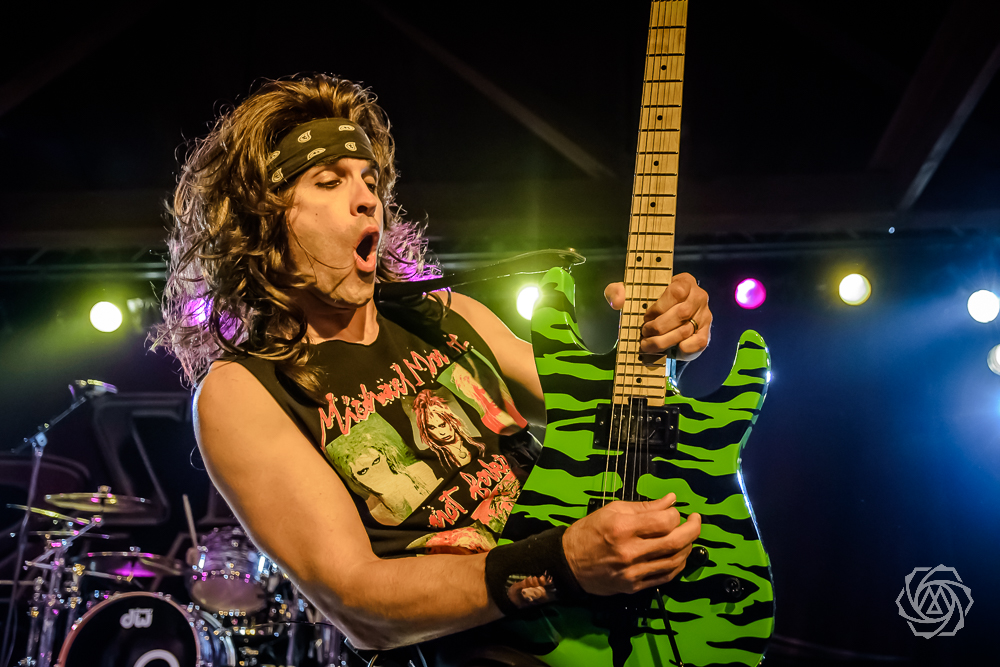 Los Angeles based hair metal jokesters Steel Panther performed to a jam packed crowd at the Showbox Sodo. With lots of tattoos, hair, makeup, spandex, and 80’s glam rock cranked to ten, the band performed a 90 minute set filled with solid guitar riffs, hilarious antics and stage moves, and in between song banter that was funny at times and absolute hilarious insanity at others. No one in the crowd would keep from laughing half to death.

Steel Panther appeals to fans of 80’s hair metal, so much so that half of the crowd was dressed as if they were in a time warp back to that heyday of glam. Girls in short, tight dresses with teased hair and dudes in sleeveless shirts, denim jean jackets, and spandex leggings. Singer Michael Starr, guitarist Satchel, bassist Lexxi Foxx, and drummer Stix Zadinia gave the crowd exactly what they wanted and expected, a set filled with catchy rock tunes, raunchy joking in between songs, and lots of interaction between the band and the crowd.

As the band took the stage, there was a deafening roar from the crowd, and Steel Panther proceeded to launch into “Eyes of a Panther.” As singer Starr made his way onto the stage, the crowd grew louder and raised their hands into the air. Foxx and Satchel performed synchronized hair twirling, kicks, and jumps as Starr ran back and forth across the stage. The band then proceeded to go into “Just like Tiger Woods.” The crowd, knowing all of the lyrics, sang along with Starr as Satchel pretended to be swinging a golf club.

At the end of “Party Like Tomorrow is the End of the World,” the band introduced each other to their fans (known as Fanthers), often insulting or bashing on each other, even making comments and poking fun at some of the Fanthers, which has become a highlight and staple of their live performances.

Starr made sure that the crowd was involved with each song, either by singing right at members of the crowd, giving them the mic to sing the lyrics, or having the entire crowd sing the choruses along with him.

Satchel proceeded to belt out to what seemed to be a 10 minute guitar solo, filled with a large number of riffs taken from many of the giants of heavy metal, including Deep Purple, Judas Priest, Iron Maiden, Metallica, Ozzy Osbourne, Guns N Roses and Black Sabbath.

Of course, it wouldn’t be a Steel Panther show without a large number of female participants getting on stage while the band continued to play, finishing out their set with “Death to all but Metal.” As the crowd screamed and begged for more, the band delivered and proceeded to play “Community Property” and “Party All Day” before calling it an evening.

Though their songs and stage antics can be somewhat controversial, the showmanship and musicianship of Steel Panther is always on point. Additionally, they don’t take themselves seriously, delivering an exceptional performance and ensuring that their fans to have a great time and leave the show entertained.

Opening the show were Seattle’s very own December in Red.