By Christine Mitchell on November 29, 2016@Housetornado37 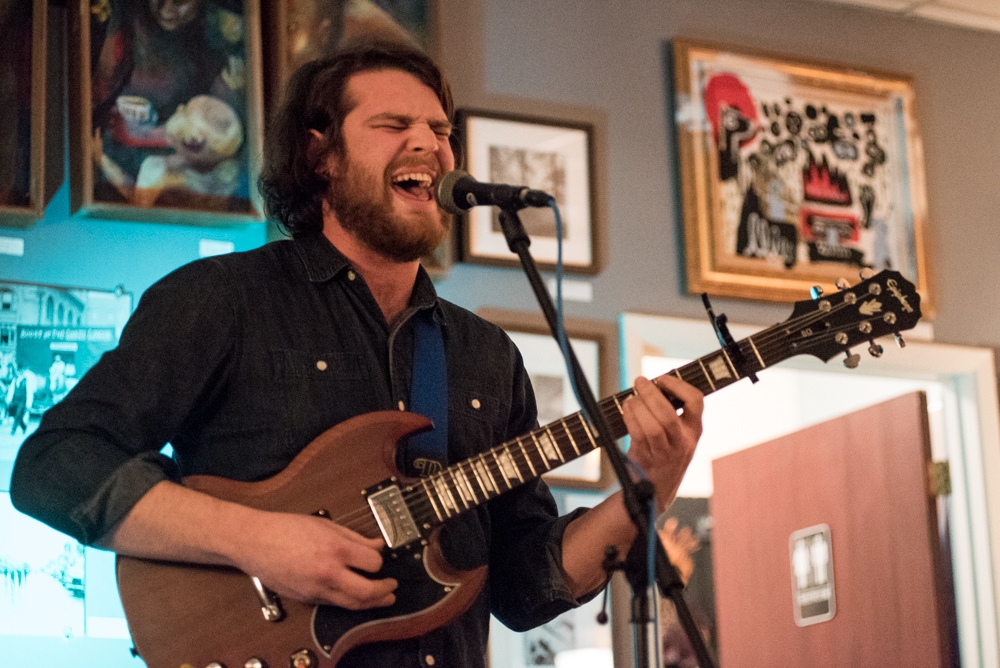 The streets of downtown Everett were dark, rainy, and blustery. So it was an immediate treat to step into the Black Lab Gallery on Hewitt for its first musical performance, featuring Leava and Crater Lakes. The ambiance was warm and inviting, the art on the walls provoking thought and admiration, the smell of coffee and sight of glasses of wine and bundled up folks sitting at tables here and there reassuring and cozy. Every few seconds, more people blew in through the front door, slowly filling the intimate space with anticipation.

The mood was relaxed as the two performers set up at the back of the room, a corner filled with compelling imagery. Ryile Smith, aka Crater Lakes, played a gorgeous set of songs that at times hung together via lazy little loops that Smith recorded and played to hitch one tune to the next. The loops themselves would seem haphazard until Smith would start the next song off while the loop still played, at which point all fell into place ingeniously. Crater Lakes’ music is all atmospheric downer, shimmering in its empty spaces as it casts its gaze to the ground. Smith tempered this with between song banter that started off as a seed of sly humor but grew into full blown silliness as the night went on.

Leava’s music is serious. Simon Nicol’s most recent work under the Leava moniker is dark yet makes liberal use of lush soundscapes both typical and electronic. His voice quavers with uncertainty; when Nicol dug into his upper register you could feel it, but those upper notes came easily anyway, fragile as they were. The music was quite stripped down as it featured just that voice and electric guitar. But it was beautiful. Brunt is a lovely EP that deserves repeated listens, especially during these dark, wintry months.

Of course, throughout Leava’s set, the aforementioned goofiness pervaded. Smith introduced Nicol, who hid in the bathroom hall in order to make his “entrance” (which they did twice as they both agreed that the first try was lame). Nicol would play one of his intricate, depressing songs, and then a hilarious interlude would occur, whether coming from Smith, Nicol, or both, everyone dying in fits of giggles. A cover of AC/DC’s “Thunderstruck” was played. The audience was treated to Beck’s “Special People” via Nicol’s iPhone. Nicol played “Black Nikes,” a track off Oliver Elf Army’s upcoming EP (which he produced and is currently mixing) to the intense delight of Oliver Elf Army (who were present) and bemusement of everyone else. The little jokes piled up and the crowd was nearly in tears. The night ended with the duo meandering along on a jam together even as they insisted the show was over. Gallery owner Isabella Valencia took the mic in order to thank the audience and found herself duetting with Smith on a cover of Patsy Cline’s “Walkin’ After Midnight.”

If this show was any indicator, forthcoming awesome gigs at Black Lab Gallery look promising.

Christine Mitchell has been poring over album liner notes pretty much since she acquired the skill of reading, and figured out the basic structure of rock songs at an early age. Whether it’s the needle popping into the first groove of the record, the beeps that signal the beginning (or end) of a cassette tape, or digital numbers ticking off the seconds from zero, music brings Christine happiness, ponderous thought, opportunities for almost scientific study, and sometimes a few tears. When she started attending live shows two decades ago, a whole new piece of the puzzle clicked in and she has been hooked ever since.
Related ItemsBlack Lab GalleryChristine MitchellCrater LakesFeatureLeavaRyile SmithSimon Nicol
← Previous Story Duke Evers’ ‘Velvet Hips’ Release Party
Next Story → Dark Tranquility Leaves Seattle In Rubble