Watsky Amps Up All Ages Crowd for X Infinity Tour 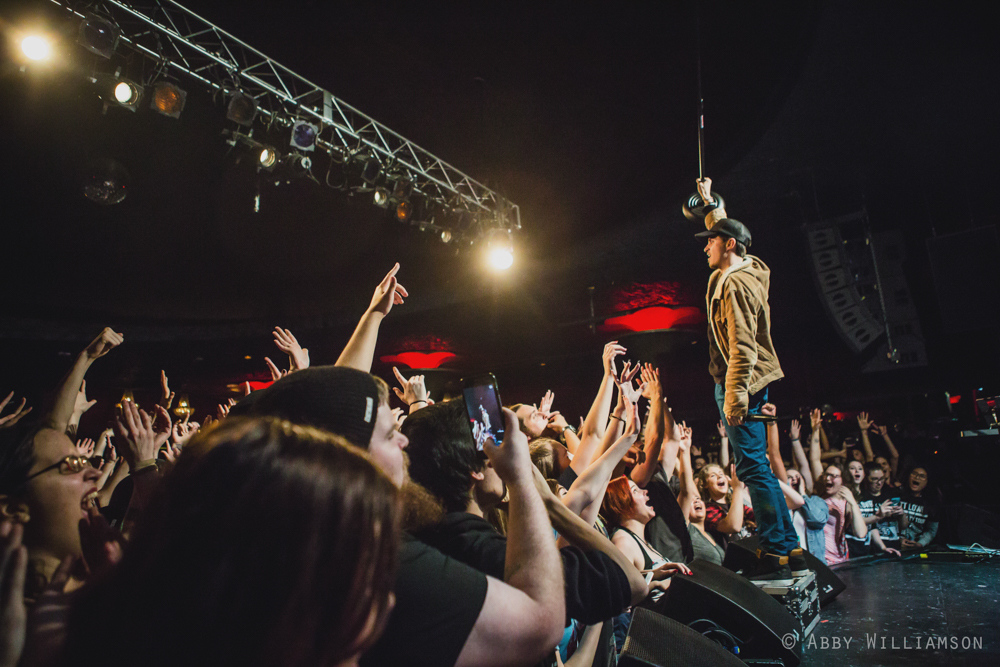 Watsky at Showbox at the Market (Photo: Abby Williamson)

George Watsky, known by his stage name as just simply Watsky, hasn’t followed the most stereotypical route to stardom. He got his start as a spoken word poet, then started making music videos on YouTube, released a few mixtapes on Bandcamp, and performed at Vidcon several years in a row. Fast forward to 2016, where he has since gained a huge following because of his online presence, and thus – has sold out tours across the country.

The x Infinity tour made its way to the Showbox at the Market last month, the week after the election – so the general mood was more pronounced than usual. Needless to say, Watsky and his openers didn’t shy away from making political statements that night. Seeing that the audience was largely underage and from the sounds of it – also angry – those sentiments were welcome.

Opening the show was Georgia native Daye Jack, a young MC with a ton of promise. One of the high points from his set was “Hands Up,” which features Killer Mike on the recorded version. The song chants “Living with my head down, hands up, no no don’t shoot.” Jack engaged the crowd, getting them to shout along to the reprise at the tops of their lungs as a form of catharsis.

Frequent Watsky collaborator and producer Chukwudi Hodge took the stage for a short DJ set, where he sat behind the drum kit and started his own dance party. It was fun and lighthearted and just a little bit biting. Hodge, speaking into his headset mic proclaimed to the crowd, “I’m gonna play some ratchet tunes tonight, is that alright with all of you? I feel like this is a safe space, so I want you all to feel that way too.” And with a sharp left turn, he busted into “Girls Just Wanna Have Fun,” which evolved into a loud, joyous sing-along.

Witt Lowry had a clear crowd of super fans, and they were all up front rocking his t-shirt and already clutching his posters in their hands. I’d never heard him, but his following was much deserved. Another young MC, Lowry’s flow reminded me of the early years of Macklemore. Atypical for the genre, the rap ballad “Wonder If You Wonder” was the stand-out track, one that you could just close your eyes and listen to.

The night was long – but it was still young – because once Watsky took the stage, the crowd of teenagers went crazy (there was a decent crowd at the bar too, not to disregard Watsky’s older fans like myself). With an impressive setlist of 20 songs, Watsky featured guests like local Camila Recchio for his whole set and rapper Sol for a song. Watsky is impressive in his own right, but it’s his constant collaborations that sets his live shows apart. His full band includes Chukwudi Hodge on drums and producer/instrumentalist Kush Mody on guitar, both of whom he has worked with for years. He hit tracks from his new album X Infinity, but the highlights were from deep in his discography like “Wounded Healer,” featuring a Deer Tick sample. But what I will forever argue as Watsky’s best song, “Tiny Glowing Screens” hit the room like a shotgun shell.

And we all fell silent.

I will spare you having to read all the lyrics to that song, but I strongly suggest you watch the video. You won’t be sorry.

Watsky made the Showbox a safe space for people to get mad, to get ecstatic, to scream at the top of their lungs, to feel absolutely everything that needed to be felt. And that – my friends – is what music is supposed to do.

Abby Williamson is a photographer, writer, and video blogger with a passion for live music – especially the local scene. She recently moved to Seattle after commuting from Gig Harbor for shows an average of once a week for five years, so she’s happy to not have to drive as much and photograph even more concerts! When she’s not elbowing her way up to the front row at a show or sorting through thousands of photos of those shows, Abby also does freelance wedding photography, all the while cultivating a decent-sized following on YouTube. Abby has contributed to several music blogs over the last five years (and she’s really excited to join the SMI team!), and has been published in at least one album booklet for the band, Someone Still Loves You Boris Yeltsin. She would like people to know that while music photography and writing is a huge passion in her life – she is a fan first, photographer second.
Related ItemsAbby Williamsonchukwudi hodgeConcertdaye jackFeatureReviewShowboxShowbox at the Marketwatskywitt lowryx infinity tour
← Previous Story The Pretty Reckless Meld Blues and Rock At Showbox SoDo
Next Story → DTHB Illuminates & Mesmerizes Seattle