By Mike Baltierra on December 7, 2016@baltierraphoto 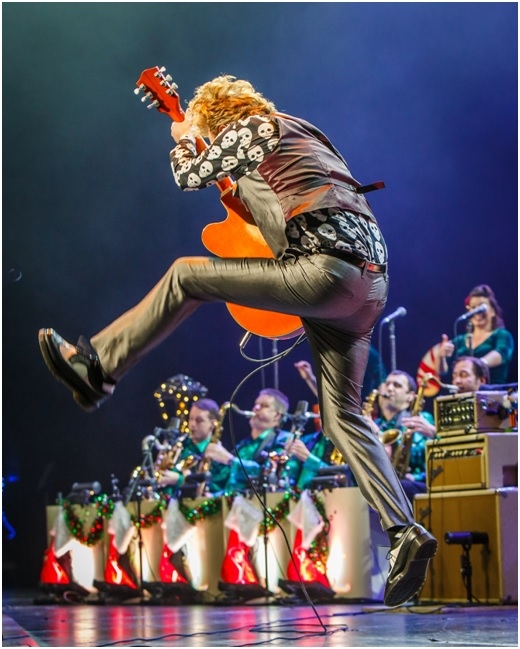 Brian Setzer and his nineteen piece Brian Setzer Orchestra will be making a stop at the Paramount Theater in Seattle on Monday, December 26th. The 13th Annual Christmas Rocks! Tour will feature music of BSO’s latest album, Rockin’ Rudolph, plus music off of their previously released bestselling holiday albums as well as original material by Brian Setzer.

Setzer is an iconic guitarist, vocalist, songwriter, and three time Grammy Award winner who is credited with single-handedly resurrecting two forgotten genres of music: rockabilly in the 80’s and swing in the 90’s. He has also scored many chart topping singles, has sold over 13 million records and is the recipient of the Orville H. Gibson Lifetime Achievement Award for his decorated career and the founder and leader of the band the Stray Cats, the Brian Setzer Orchestra and also as a solo artist. Setzer has been cited as one the world’s greatest living guitarists and has an exclusive and bestselling line of Gretsch guitars which bear his name. He is also known for his appearance in the 1987 film, “La Bamba” portraying Rockabilly pioneer Eddie Cochran.

Rockin’ Rudolph was produced by Peter Collins (Rush, Bon Jovi, Alice Cooper) and was recorded in both Nashville, TN and Hollywood, CA. It includes highlights such as “Rockin’ Around the Christmas Tree,” “Yabba-Dabba Yuletide,” and “Rockabilly Rudolph” among other notable Christmas classic tunes. Setzer’s trademark guitar work and vocal stylings are matched with The Brian Setzers Orchestra’s rockin’ big-band horn arrangements – an unbeatable combination.