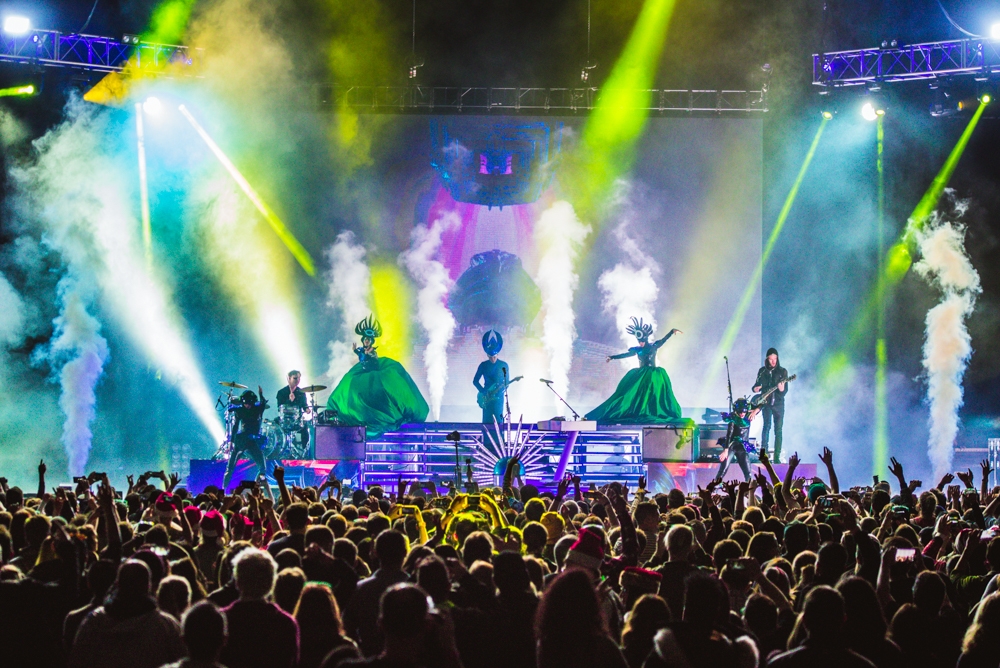 Another holiday music season in Seattle was kicked off this week with this year’s installment of 107.7 The End’s, DECK THE HALL BALL. Held at Key Arena, fans were entertained by My Goodness, Coin, Glass Animals, Band of Horses, Phantogram, The Head And The Heart, Jimmy Eat World, and Empire of the Sun. Fans were decked out in “ugly sweaters” and a variety of other holiday attire, including clothes that lit up in lights & Santa hats. Each band had their own spin on stage presence, stage props, and lighting effects and kept the crowd entertained throughout the day’s event.

With the rousing sounds and applause from the crowd for locals, My Goodness & Head And The Heart, to break out performances by Coin and Glass Animals, many fans also included vip meet & greets with their favorite bands, making the night even more magical. Band of Horses threw candy out to the crowd, and Phantogram definitely put the “bass” in bass, as the entire arena shook and vibrated to the beats of many of their tunes.

While several of the bands have been out on tour, with many making Seattle stops this year, perhaps the one fans most anticipated seeing live was Jimmy Eat World.  They recently released their ninth album, and have hit the tour circuit once again. The crowd erupted with joy as they took the stage, and the energy was maintained and was heavily escalated when they finally played their most popular song, “The Middle,” at the end of their set.

Closing out the night was a spectacular visual and music presentation from Empire of The Sun. If you leave an event asking yourself, “What was that?”, you know it made an impact. Their lighting, dancers, costumes, was simply everything. Everything you could and a should expect from them, and fans left Deck The Hall Ball mesmerized and contented.

Mocha Charlie is an amazing photographer who has a real passion for music. She covers and shoots several shows per month in and around the region. She a brilliant photo journalist but most importantly, she is also a mother who does her best to balance out her life and live it to the fullest. Mocha Charlie uses her passion and talent to support the community, her friends and family any way that she can.
Related Items107.7 The End107.7 The End Deck The Hall BallBand of HorsesbandsCoinDeck The Hall BallDTHBDTHB2016Empire of The SunFeatureGlass AnimalsKey ArenaMocha CharlieMusic FestivalMy GoodnessPhantogramSeattleThe Head and The Heart
← Previous Story Watsky Amps Up All Ages Crowd for X Infinity Tour
Next Story → “A Band in Seattle Christmas” delivers locals-only versions of holiday tunes