In Flames Makes Another Visit To Seattle 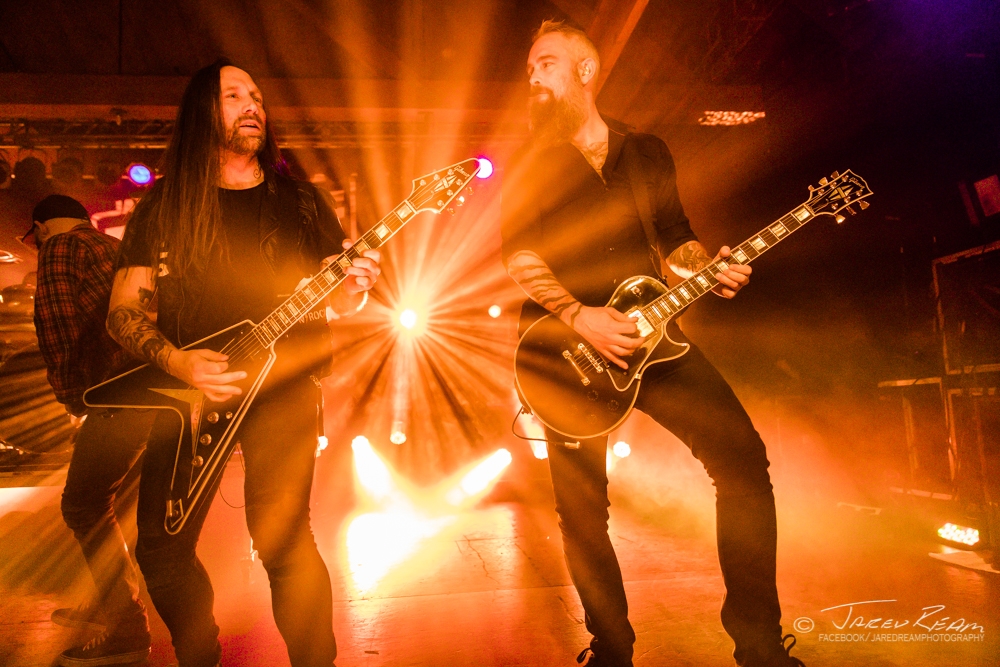 In Flames at the Showbox SoDo (Photo by Jared Ream)

The Forged in Fire tour seared itself into the memories of the fans in Seattle Tuesday night at the Showbox SoDo. Swedish metal band In Flames are currently touring the United States in support of their most recent album release Battles, along with co-headliners Hellyeah and opening acts From Ashes to New and Source. Currently, the tour has five more shows in Canada and the US, then they take a holiday break, resuming their world tour in the UK on January 10th.

Due to a combination of bad weather on the pass and vehicle break down, From Ashes to New was unable to make it to the show. This left more time for the first band Source to open the show. Hailing from Colorado, they are a progressive metal trio. They opened up their lively set with a sound that was very much like Tool. Many of the riffs, bass grooves, and drum fills were reminiscent of Danny Carey, Justin Chancellor, and Adam Jones. The only thing missing was the haunting vocal of Maynard James Keenan. But don’t let them fool you, Source can hold their own. Dan Crisafulli  created spine tingling  bass riffs that filled the rhythmic and melodic voids of Ben Gleason’s lead guitar. Drummer George Octobous filled every nook and cranny with infectious double bass and mounted tom fills. Source was a pleasant surprise to the awaiting fans.

After what seemed like only a couple minutes of transition, Hellyeah took the stage with a demanding presence. The band dropped a new album earlier this year, titled Undeniable, and their explosive set began with the new song “X.” The energetic Chad Gray attempted to defy gravity with insanely high jumps whilst slinging his venomous lyrics at the same time. He kept his fans’ attention between songs, talking to the near sellout crowd in an almost sermon like manner: “The fans of heavy metal are all alike. We are all one big happy fucking family.” One of the biggest highlights of Hellyeah’s set was a cover of the Phil Collins song “I Don’t Care Anymore.” Although artists like Phil Collins typically don’t come to mind when someone thinks of, or even listens to, a heavy metal band like Hellyeah, they killed it! It was truly an infectious cover that had all the perfect ingredients: a thick heavy bass line provided by Kyle Sanders, truly powerful and unrelenting drumming by Vinnie Paul, and ear shattering guitar riffs by Christian Brady and Tom Maxwell. All of this was blended effortlessly with the deep, heavy groove vocals of Gray.

Ending the night was one of the founding bands of Swedish melodic death metal, In Flames. They started their set with the crowd favorite “Bullet Ride,” which brought the crowd to a small frenzy. Each song played, whether from early albums or their most recent release, showed the crowd showing their appreciation with increased energy with every song. Each member engaged the enthusiastic fans, who were introduced to newest member, drummer Joe Rickard, who joined the band permanently in September. Lead singer Anders Friden engaged in some friendly teasing with guitarist Bjorn Gelotte, who was happily drinking Bud Light, which then turned into a PSA to support local breweries. The most memorable part of the night for everyone in the venue was when Anders reminded the crowd of the sad news that this show would be the last time long time bassist Peter Iwers would be seen with In Flames in Seattle. Iwers announced in November that the Battles tour would be his last, leaving Friden and Gelotte as the only remaining members of the band since the 1990’s. Friden spent time between songs joking with the crowd, at one point even taking questions from audience members. The crowd showed their love and appreciation by crowd surfing and moshing. In Flames departed the stage after just over an hour of a completely solid and awesome set, leaving the crowd wanting and longing for more.