The Sounds Pack A Sweet Punch 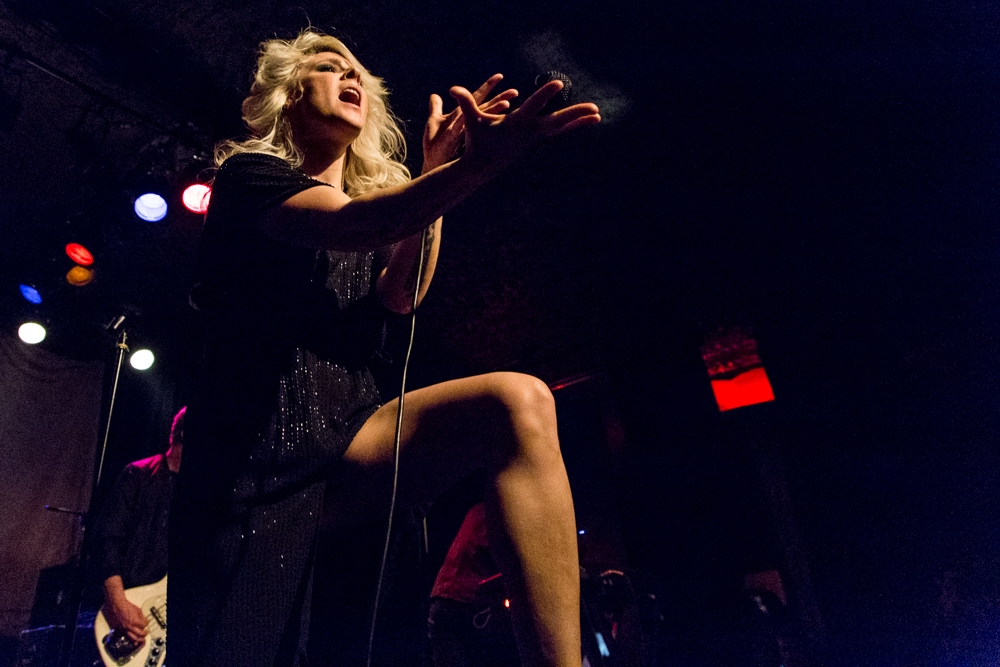 The Sounds at The Showbox (Photo by Stephanie Dore)

Sweden’s The Sounds wrapped up the 10th anniversary tour for their seminal 2006 album, Dying To Say This To You, at Seattle’s Showbox with a set that proved why the electro-rock sweethearts are so revered by their dedicated fans. While they have only released one single – this November’s “Thrill” – since their last full-length in 2013, their music has held such a special place in people’s hearts that the crowd knew every word.

The show kicked off with Austin doom-pop quartet My Jerusalem and their outlandish outlaw sonics. Drummer Grant Van Amburgh stole the show by stripping down to his skivvies, but the group’s cohesion and complexity shone. From love to self-loathing, their tortured Southern rock was catchy and dark. They jumped into the barricade to get close to the crowd, and closed their set with Van Amburgh jumping on his kit to puncture the drum heads. While the crowd hadn’t filled in quite yet, those who were there were dancing.

They were followed up by James Iha-produced Zipper Club. The trio made their no-nonsense hooks and synthy melodies resonate against a neon light backdrop. Their off-kilter personas – Mason James’ punk rock posting and Lissy Trullie, who was strikingly stoic – lent an awkwardly attractive air to the room. Their clean vocals, buzzing guitars, and strong beats give ZC an ideal jumping off point to take over the airwaves.

With the lights down and “Anthem” – from the musical Chess – announcing the arrival of the headliners, the crowd’s energy level jumped tenfold. The powerful opening beat of The Sounds’ “Song With A Mission” immediately had the crowd dancing so hard that the floor shook, and despite it being the last night of the tour, the band gave it their all.

Vocalist Maja Ivarsson took charge of the stage, and the band proceeded to play the entirety of DTSTTY, in its original track order. This is the album that spawned hits like the essential “Queen Of Apology” and “Night After Night,” and took the band on two years of touring around the world, and it was a revelation to hear the entire thing at once.

Look beyond the glossy surface of DTSTTY and you’ll find authentically bittersweet lyrics and unabashedly catchy melodies that go from new wave magic to fist-pumping exclamations. All of which came across in the group’s live performance. They do what they do with honesty and passion, and it showed.

Ivarsson basically manhandled the room from the stage, swishing her glittery black dress, high-kicking the air, doing mic tosses like the best hair band in town. The hooky, looping tracks were barely loud enough to hide the crowd’s singing along. Tracks revealed a raw sentimentality, and the fierce musicianship of the band begged for engagement from the room, which gladly obliged.

During the slower “Night After Night,” the crowd lit up their phones and Ivarsson let them wholly sing on their own before transitioning to the “woman scorned” anthem of “Ego.” A massive two-man drum pad solo got raves from the crowd. At the end of the DTSTTY portion of the set, they moved on to their 2009 hit “No One Sleeps When I’m Awake,” and the audience went nuts. It’s possible someone even crowd surfed.

The only track that felt out of place was “Thrill” and perhaps it’s solely because the crowd didn’t know it as well as the rest of the setlist, but I bet they will soon enough. Given the Rocky meets Rocky Horror vibes of the track, it felt like a natural move for the group. They threw in a number of other older tracks that spanned their catalogue, and otherwise kept the crowd reveling in nostalgia til the very end, announcing that we should expect a new EP in 2017.

The Sounds Set List
Song With A Mission
Queen Of Apology
Tony The Beat
24 Hours
Painted By Numbers
Night After Night
Ego
Hurt You
Much Too Long
Running Out Of Turbo
No One Sleeps When I’m Awake
Like A Lady
Thrill
Midnight Sun
Best Of Me
4 Songs & A Fight
Shake, Shake, Shake
Living In America
Encore
Rock & Roll
Hope You’re Happy Now