By Christine Mitchell on January 3, 2017@Housetornado37 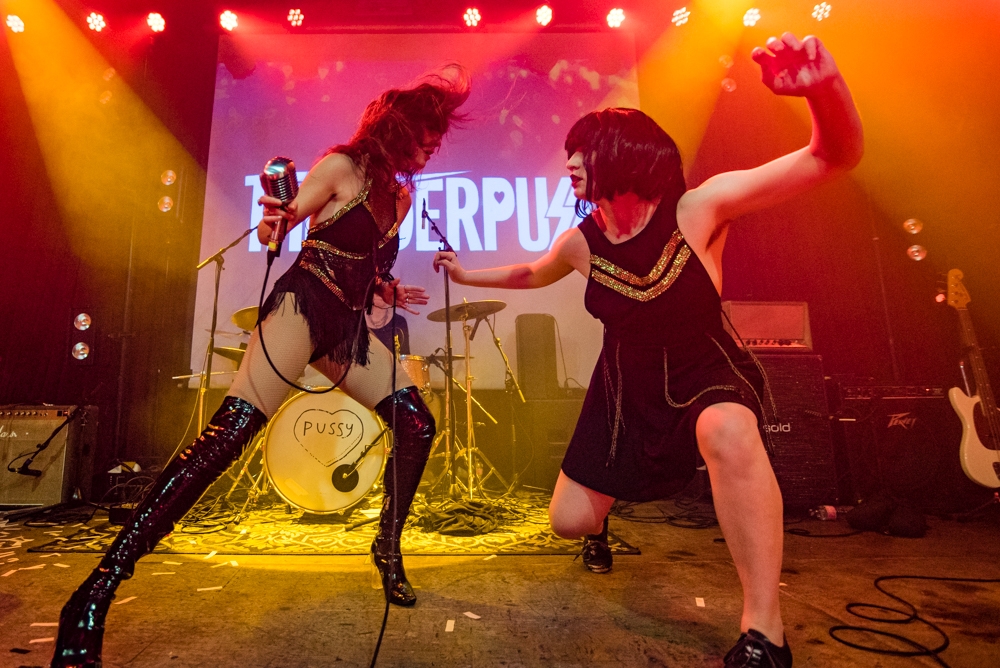 Thunderpussy had a pretty amazing 2016 in spite of, well, 2016. This band has taken seventies rock and roll mixed with blues and glam and stood it on its head, and their exponential growth and overall visibility in the local scene has them leading the pack. They’ve played basically every festival in the area and dominated. Their set list has expanded in length and depth, as has the performance aspect of their shows. Thunderpussy shows no signs of slowing down; on the contrary, with an album waiting in the wings and their eyes set on touring, the sky’s the limit in 2017. And what better way to cap off a year of triumph than with back to back, sold out shows at Neumos?

Night one had a lineup that was undeniably chock full of rock, with Naked Giants and Wild Powwers opening. Naked Giants have had quite the year of their own, what with the release of their excellent RIP EP and breakout performances at Bumbershoot and Band In Seattle. The trio started their show off with everything dialed to 11, from their exaggerated, physical way of playing their instruments to the booming volume, which pounded into the hearts of the all ages crowd. The set list featured a slew of new songs (which sounded great) along with a few standbys (“TV” and “Pyramids” among them). The floor was already packed, and people were flailing about. Off to a good start.

Wild Powwers’s set was wildly reminiscent of the heyday of grunge, when Selene Vigil of 7 Year Bitch would growl her vocals against a filthy backdrop of noise. Except here, the growls were emitted by Lara Hilgeman and powered by the drumming of Lupe Flores and bass of Jordan Gomes. The seriousness of their music was belied by their t-shirts (one Motorhead, one Motley Crue, and one The Bangles) and Flores’ smiles and banter between songs. There is a reason that Hugs and Kisses and Other Things is on our “Best of 2016” list (as is the aforementioned RIP EP).

Night two’s openers took a different tack, with J GRGRY up first, giving a performance that was passionate and strange at the same time. Joe Gregory’s voice was pleasant and ameliorating, soothing with just a hint of rasp. The music was poppy and awash with eighties electronic tones, and, paired with Gregory’s voice, made for a very solid, moving set. To add to this, Gregory was painted mauve and gold, shirtless and with one pant leg missing. Two models flanked the drum set, one male and one female, painted gold and in their skivvies. They would hold a pose for a song, then strike a different one for the next, and so on. It was slightly disconcerting, and definitely different.

Porter Ray took the room on a poetic journey of his experiences, rapping alongside his cohorts Nate Jack and Cashtro among others. Footage of New Year’s Eve fireworks at the Space Needle played amidst that of folks on phones, galaxies, and panthers as Ray told it like it was. His recent gigs at local festivals and also opening for Lauryn Hill last November show that 2017 will be a good one for Porter Ray.

Each successive Thunderpussy show ups the ante a bit, and this pair was no exception. There aren’t many local bands that take the time to augment the venue lighting with their own rig. A few bands do use smoke machines and/or projections. Thunderpussy does all three, and this along with their highly entertaining show antics and always-changing, always matching stage outfits make for a feast for the eyes.

But that music tho. Both shows started off with Ruby Dunphy attacking her drum kit, game face on with attendant Siouxsie Sioux eyeliner as she bashed the toms and led into “Speed Queen.” “Fever” has been around forever in Thunderpussy’s setlist, and there’s a reason why they keep coming back to it. Whitney Petty’s guitar sounded like a revving motorcycle gone awry, and it’s only gotten more intense and gruffly dirty with time. Molly Sides’ voice shimmied and soared and powered over the guitar, somehow. The whole thing was ballsy as all get out.

New songs filled the setlist both nights, several of them leaning toward the blues end of the rock spectrum and full of the weight of their emotion (“No Heaven,” “The Cloud”). “New Shoes” and “Utero Tango” are both booty shakers, with the latter featuring the Pussy Foot dancers in black dresses and black wigs, propelled into motion by the sheer driving force of Leah Julius’ start-stop bass playing.  Two covers were also played: “Dazed and Confused,” with Petty attacking her guitar with a bow like Page, and “Somebody To Love,” a new cover of the old Jefferson Airplane classic. Sides perfectly embodied Grace Slick’s voice; it was a little eerie and also extremely awesome.

For the New Year’s Eve show, there was a countdown with confetti cannons, champagne drunk out of Chambongs, and hugs all around. Outside in the wee hours of 2017, it had begun to snow. The new year holds the future in its hands, and in Thunderpussy’s case, that future is bright.

Christine Mitchell has been poring over album liner notes pretty much since she acquired the skill of reading, and figured out the basic structure of rock songs at an early age. Whether it’s the needle popping into the first groove of the record, the beeps that signal the beginning (or end) of a cassette tape, or digital numbers ticking off the seconds from zero, music brings Christine happiness, ponderous thought, opportunities for almost scientific study, and sometimes a few tears. When she started attending live shows two decades ago, a whole new piece of the puzzle clicked in and she has been hooked ever since.
Related ItemsAlex CrickBand In SeattleChristine MitchellFeatureJ GRGRYNaked GiantsNeumosPorter RayThunderpussyWild Powwers
← Previous Story BEST SEATTLE ALBUMS OF 2016: ABBY & CHRISTINE’S PICKS
Next Story → An Excellent Friday Night at Louie G’s