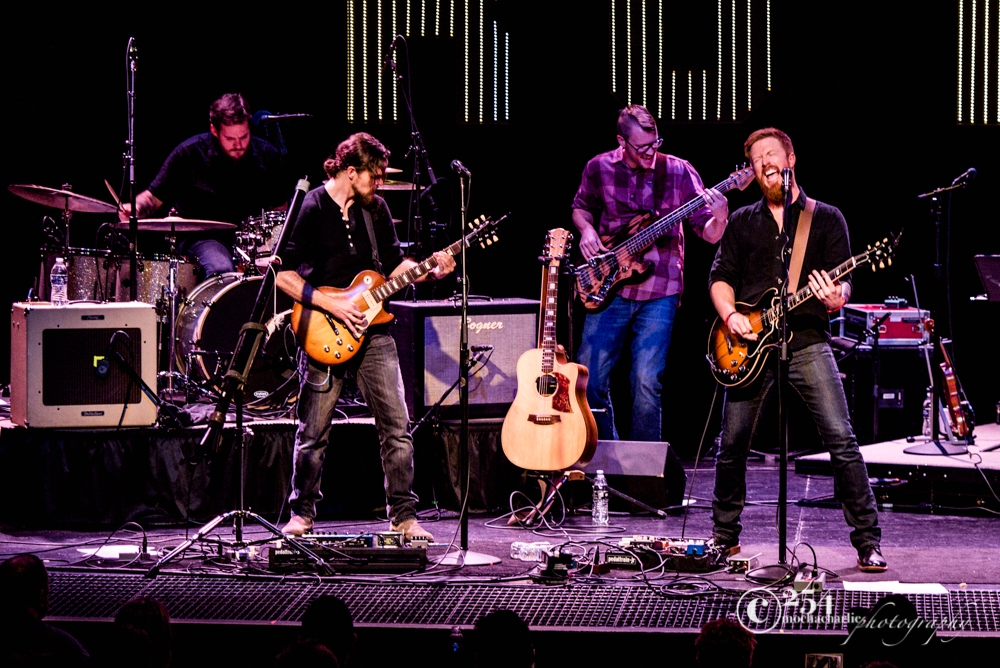 The Rust on The Rails album release show on January 8th at The Triple Door was arguably one of the most memorable shows of 2017, even though it was only eight days into the year. The band’s first full length album Talisman was on debut that night, demonstrating what they call “American Aussie Roots.” The group is a collaboration of musical talents, all with diverse backgrounds and skill sets. Cody Beebe rocked as lead vocalist and guitarist, Blake Noble stunned on guitar and the didgeridoo, Eric Miller killed it on bass, and Chris Lucier impressed, as always, on the drums.

Talisman is an amalgamation of American Rock and Aussie tunes, with orchestral-twang strings and soulful lyrics. What proved interesting that evening was that the band’s live performance of their new tunes added a different flavor than their album provides. You can hear the harmony when you listen to Talisman, which you can download on iTunes now or on their website, but you can’t feel the chemistry between the men like you can during a show. In a live setting, you feel like you’re on stage jamming with the guys, experiencing the raw visceral power and reveling in their music.

The evening started off with Sarah Gerritsen & the Shadow Catchers. Gerritsen sang lead vocals, along with her backup singer and violinist/backup vocalist. The trio shared the role of perfect harmonization with their male counterparts on drums and bass. But the female power emanated throughout the lyrics.

The band performed a wide variety of tunes from Sarah’s catalog, including songs from their newest record, Angeline.   Gerritsen paid tribute to her father, Coyote, who passed away earlier this year, in their closing song. The strength of the song was not only in the melody and lyric, but also in the way the group connected with the crowd at the Triple Door.

Andrew Joslyn’s Passenger String Quartet performed second, giving the audience a taste of what was to come with their eventual accompaniment with Rust on the Rails. The quartet is an avant-garde, experimental neo-classical group formed by Joslyn back in 2010. Joslyn’s set list included a few covers that he wrote arrangements for, including Pearl Jam’s “Oceans”  and a mashup of Nirvana’s “Smells Like Teen Spirit” mixed with Mozart’s Symphony #40, the latter of which got members in the crowd shouting in excitement as Joslyn’s version mimicked the angst and sheer rock of the famous grunge hit.. He also performed for the first time the string parts to one of his singles, “Icarus,” from his upcoming debut full length record that will be released on February 18th.

At the end of the Passenger String Quartet’s set, they held an extended drone as Rust On The Rails took the stage to start the headliner’s set with “Foolish Pride.” The band played a number of tunes with the string quartet at the beginning of the set, and after the tune “Every Little Thing” the quartet was dismissed from the stage. The band performed a couple more tunes, then the bassist and drummer also left, leaving the primary leads of the group, Beebe and Noble on their own.

Beebe and Noble did a stripped-down version of a song they wrote together when they first started collaborating about two years ago. For their album, the band enlisted help from NBC’s The Voice star Austen Jenckes, who co-wrote some songs. The band played tunes from Talisman, which included revised versions of older songs, like “Far Cry,” “Trip,” “Abbot & Costello,” and “Lost & Found.” The gritty vocals of Beebe mixed with creative lyrics, Noble’s unique talents, Miller’s bass skills, and Lucier’s exceptional drumming has made this album a must-buy.

Towards the end of the evening, Andrew Joslyn was brought back onstage, and the band performed a Aussie hoedown called “Pelican” by Blake Nobel. The crowd was on their feet for this number which is strictly a live show song, but has the band doing a literal “musical chairs” with the band members all shifting instruments:  Eric taking lead guitar, Blake taking on drumming, Lucier auxiliary percussion, and Beebe playing bass guitar.  Songs like this show the actual talent of the members of the band and the wide diversity they bring to their performances.

The finale of the show had the full quartet plus Sarah Gerritsen’s band all back on stage performing “Play The Fool,” which was a spectacular and lush performance start to finish. After this, the band wrapped up with “Secrets” (a rocking tune featuring Joslyn’s strings), and “Crutch,” which was a perfect example of Rust On The Rails’ raw, gutsy sound.  All in all, the show was an incredible live debut for the band’s brand new record: a tour de force of American Aussie Roots Rock.

Madison Warnock is a Seattle native writer/poet/aspiring novelist who graduated from Washington State University with a degree in English. She quickly made her way through freelance work molding her written tact through nonprofit journals, medical societies, and music blogging. She takes her musical inspiration from her close ties with the Seattle music community, and can often be found in recording studios and venues. She's a Technical Writer for GoDaddy, incorporating her love for community outreach and information acquisition. If Madison isn't writing or working she's either searching for the best gluten free/dairy free desserts in the city or playing board games. Notably she's the most cantankerous driver on the road, and she's never late for a show.
Related ItemsAndrew JoslynAndrew Joslyn's Passenger String QuartetBlake NobleChris LucierCody BeebeEric MillerFeatureMadison WarnockMocha CharlieRust on the RailsSarah GerritsenSarah Gerritsen and the ShadowcatchersTriple Door
← Previous Story An Excellent Friday Night at Louie G’s
Next Story → Van Eps and co: The New Sound Of Seattle