Band in Seattle Returns with My Goodness and Cosmos 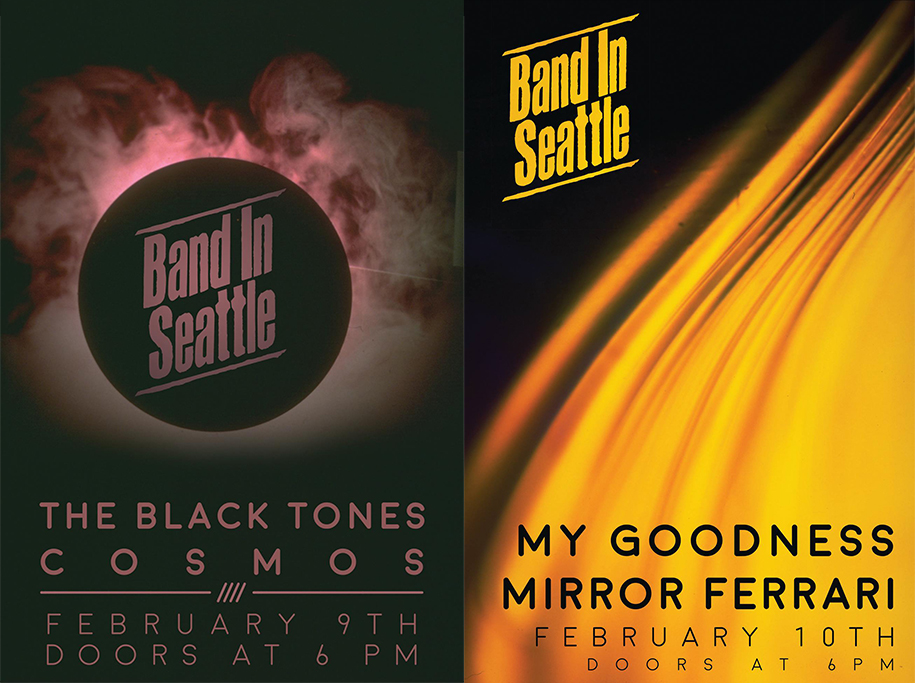 Have you heard of Band in Seattle? No? Well now’s the time to enlighten yourself – or better yet – we’ll do it for you! Over 100 bands in, the local television and web concert docuseries is just about to start taping its 4th season. The taping on Thursday, February 9th features The Black Tones and last year’s Sound Off! champs Cosmos. On Friday you’ll get the chance to see Mirror Ferrari and My Goodness. Tickets are now available on BandinSeattle.com.

If you’ve never been to a taping of Band in Seattle, we strongly recommend it. Not only do you get two great bands for nothing more than a $10 ticket, but you also get free beer, snacks, and other non-alcoholic drinks for the all ages crowd. Tapings are family friendly as well, so if you’ve been wanting to bring your kiddo out to a show but haven’t been able to yet – you’re in luck! Last season, Band in Seattle featured Pig Snout, a band where 2/3 of its members are under the age of 12.

Doors open at 6 at Victory Studios, 2247 15th Avenue West between Queen Anne and Magnolia, just south of the Ballard Bridge. You get a chance to be on TV, and there’s free off-street parking (limited, of course). It’s not often that you can go out to a show on a weeknight and be home in time for the late night talk shows.

These tapings are just the first step of what becomes an episode of Band in Seattle. The shows air on CW11 every Saturday night at 11pm. Reruns of season 3 are currently airing until the new season premieres (date TBA). So now’s the time to catch up on all the bands the show has had on previously (all of which are on the show’s YouTube channel). There’s a new promo for the show, which you can check out below (with some of our favorites: Naked Giants, Fauna Shade, and Brent Amaker and the Rodeo).

Grab tickets for Thursday and Friday.

Abby Williamson is a photographer, writer, and video blogger with a passion for live music – especially the local scene. She recently moved to Seattle after commuting from Gig Harbor for shows an average of once a week for five years, so she’s happy to not have to drive as much and photograph even more concerts! When she’s not elbowing her way up to the front row at a show or sorting through thousands of photos of those shows, Abby also does freelance wedding photography, all the while cultivating a decent-sized following on YouTube. Abby has contributed to several music blogs over the last five years (and she’s really excited to join the SMI team!), and has been published in at least one album booklet for the band, Someone Still Loves You Boris Yeltsin. She would like people to know that while music photography and writing is a huge passion in her life – she is a fan first, photographer second.
Related ItemsAbby WilliamsonBand In SeattleCosmoscw11Featuremirror ferrariMy GoodnessPreviewReviewSeattle Musicthe black tonestv showVictory Studiosweb series
← Previous Story Queensryche Ups the Ante at Snoqualmie Casino
Next Story → Sonifest 2017 and the burgeoning Everett scene