Seattle Hearts Dancing On The Valentine 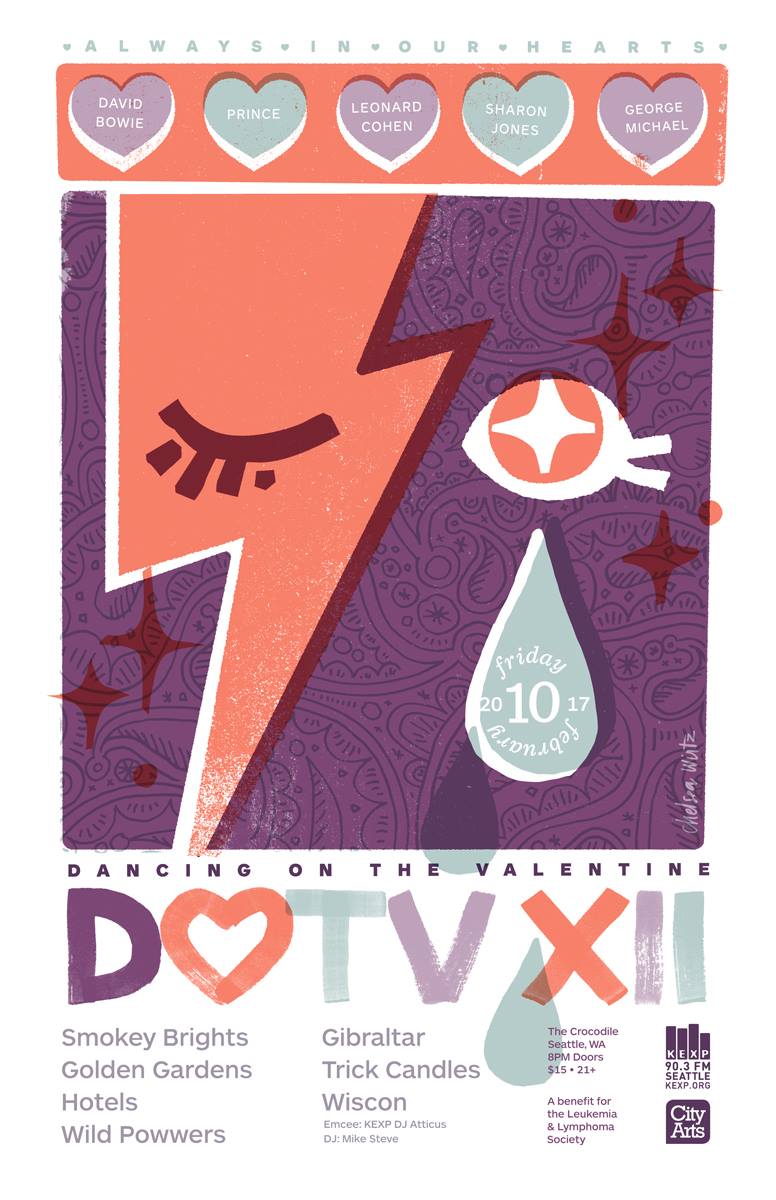 For those that love music like we do, 2016 was a very difficult year. Great music artistry was built on the backs of the likes of David Bowie and Prince. These two, along with many other prominent musicians, passed away, too many of them from cancer, including Mr. Bowie. Many of us are working on focusing forward to what hopefully is a year without loss, at least not so much in such a concentrated period of time.

There is nothing much more healing for the soul than the power of music. A very special music happening will take place next Friday, February 10, at The Crocodile. Dancing On The Valentine is a fundraising event that will feature Smokey Brights, Golden Gardens, Hotels, Wild Powwers, Gibraltar, Trick Candles, and Wiscon. Mike Steves will serve and spin as the evening’s DJ.

Jenny George launched Dancing On The Valentine 12 years ago. She wanted to give back to the community by staging a live event to celebrate life, community, music, and to raise money to fight cancer. DOTV has raised close to $60,000 for Leukemia research since 2004, and Jenny hopes to add another $10,000 to that figure in 2017. Since 2004, the event has been held annually on or around Valentine’s Day, which also happens to be Jenny’s birthday.

Jenny, who is the event’s founder and producer, was diagnosed with leukemia at age 12. She was given a death sentence: less than 30 days before her body would fail and she would leave this earth. If she did survive, she was told that she would never be able to have children.

Jenny fought the good fight and she survived. Not only did she just survive, she lived, thrived, and eventually gave birth to a son, Atticus, who is now a DJ at one of our favorite joints, KEXP. DJ Atticus will Emcee the flow of Dancing On The Valentine.

According to Jenny, one of the biggest things that helped in her recovery was the music of he favorite band, Duran Duran. She credits the stylish lads from the UK as being instrumental in lifting and feeding her spirits during her illness and eventual recovery. In fact, the event is named after the opening line from the group’s hit, “The Reflex,” (“You’ve gone too far this time And I’m dancing on the valentine”). The infectious number was released during the peak of the band’s popularity in 1983, followed by a stylishly produced semi-concert video, which garnered heavy rotation around the clock on MTV in early 1984. The song always has a special place in Jenny’s heart, given that her birthday falls on Valentines Day. Jenny was a grateful survivor – so much so that she donated her DNA to help scientists understand, diagnose, and treat leukemia and lymphoma.

This year’s theme, “Always In Our Hearts,” is the perfect choice, given the profound loss of some of our favorite artists in 2016. Dancing On The Valentine 2017 and the Seattle music community will pay tribute to the artists that we lost, as well as celebrate their legacies, work, and continued artistic impact.

Tickets for the event are available here. All proceeds from DOTV go to the Leukemia and Lymphoma Society.

Not only is he a multi-media journalist, he is also an accomplished musician. He is the founder of SMI and drives the creative look, feel and branding for the publication. His years of writing, arranging, and performing live music in a variety of genres inform his ability to communicate the message and the mechanics of music. Roth’s work on SMI reflects his philosophy that music is the universal language, and builds community. He believes it has the power to unite people of every race, religion, gender, and persuasion.
Related ItemsDancing on The ValentineDavid BowieDJ AtticusFeatureGibraltarGolden GardensGreg RothHotelsJenny GeorgeKEXPMike StevesPrinceSmokey BrightsThe CrocodileTrick CandlesWild PowwersWiscon
← Previous Story New Music: Sundries’ Do You Feel Safe
Next Story → Interview with Death Valley High and Orgy