By Mike Baltierra on February 5, 2017@baltierraphoto 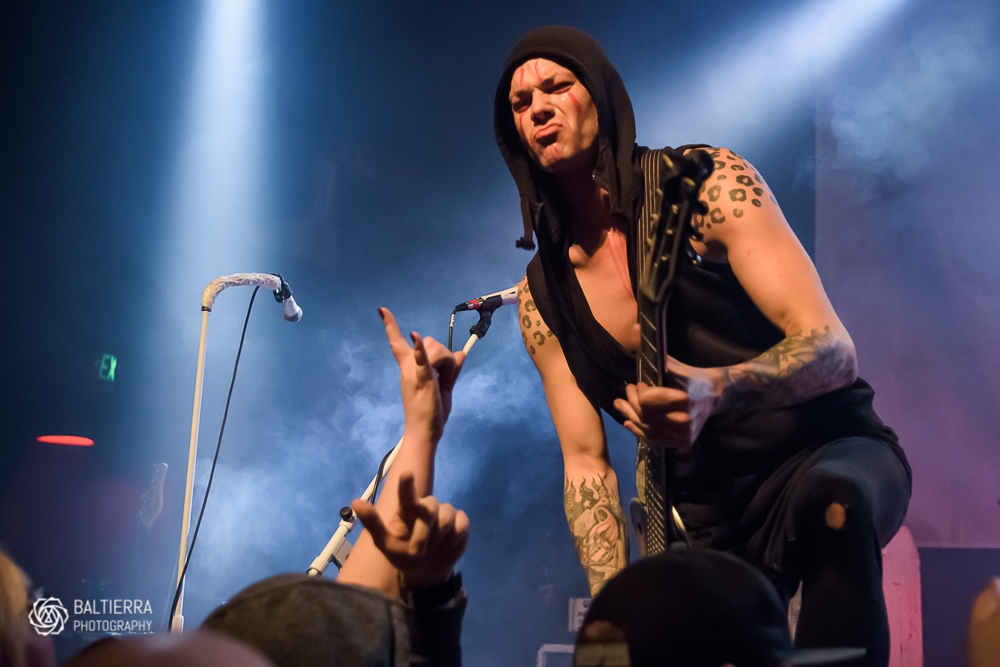 Los Angeles based Knee High Fox played a super tight, highly energized set that combined a love of horror films with loud rock. Chrissy Fox (vocals), Simon Nagel (bass), Neal Tiemann (guitar), and Oscar Silva (drums) were out supporting their latest release, Obey the Cross. The band belted out catchy tunes such as “Valentine,” “Lolita,” “Coming For You,” and a cover of the Smashing Pumpkins’ “Bullet with Butterfly Wings.”

Next up was the doom pop/death disco cinematic rock of Death Valley High, who hail from the Bay Area. According to their Facebook page,  DVH describe themselves as “Fuse distorted guitar riffs over dance-punk beats – the mixtape to a doomsday dance party.” Made up of Reyka Osburn (vocals), Daniel Ka$$hu (guitar), Huffy Hafera (bass) and Adam Bannister (drums), Death Valley High is touring behind their latest offering, CVLT [AS FVK]. They hit the stage amid lots of smoke and lights and busted out “Sunshine Cleaners,” “Psalm Bitch,” and “Warm Bodies.” The audience members were signing and bouncing along with Osburn. The band ended their awesome set with Osburn jumping into the crowd as audience members chanted “Death Valley High” into the microphone, the band closing with “DVH – The Movie.”

Co-headliners Powerman 5000 were next and showcased their brand of industrial, electronic, hard rock, alternative and nu metal. Consisting of Spider One (vocals), Murv (bass), Ty Oliver (guitar), DJ Rattan (drums), and Ryan Hernandez (guitar), Powerman 5000 rocked the packed Studio Seven audience from start to finish. Cranking out fan favorites such as “Super Villian,” “Invade, Destroy, Repeat,” “V is for Vampire” and “Supernova Goes Pop,” the band was a fireball of energy, jumping around and shooting lasers from the headstocks of their bass and guitars. The band’s stage presence  fueled the audience, who sang along with Spider and danced along as Spider yelled to bounce. The audience also showed their love for PM5K with a large mosh pit as the band finished out their killer set with “When Worlds Collide.”