By Christine Mitchell on February 8, 2017@Housetornado37 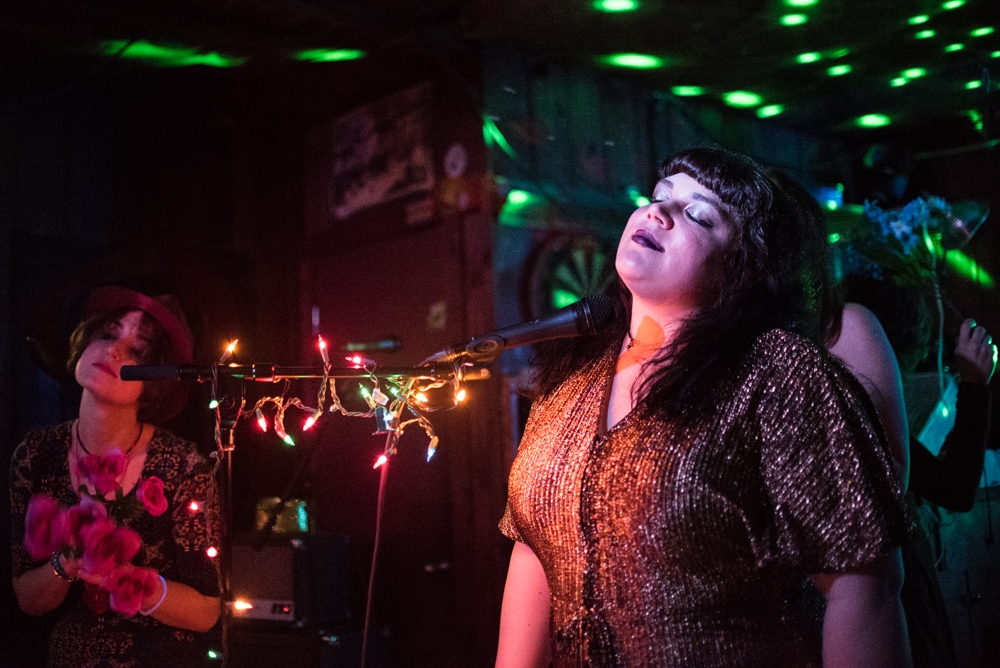 The Blue Moon Tavern played host to a bill stacked with bands from the Everett scene on Saturday, some established and some relatively new. Three of the bands (goawaysun, Nail Houses, and Dada Fructose) highlighted the growing niche of electronic music in the town up north, while Oliver Elf Army expertly harnessed lo-fi garage rock to dark humor, winning over the crowd with an adorable/sinister dichotomy in sound and presentation.

The evening began with Dada Fructose, whose combination of samples, electronic tracks, guitar, keys, and spoken word flowed into song shapes, with just a single break during the set. The growing crowd listened intently to the masked duo of Adam Bagley and Alexander Vincini as Christmas lights blinked on and off erratically.

Nail Houses’ set was raw and visceral. Christian Smith describes his solo venture as “uncomfortable music for uncomfortable people,” and it’s apt. Smith spewed artful noise punk using his electric guitar backed with tracks from his laptop. The songs came out sounding hopped up on adrenaline and anxiety, a wall of audible paranoia that was intriguing and well put together for what was only Nail Houses’ second outing onstage. A recurring sound issue could not distract from the fact that Smith’s new project is worth a listen.

Oliver Elf Army’s first show this year showed the duo in fine form. The Blue Moon had filled considerably at this point, and the while the crowd was definitely peppered with those who had made the trek south to support their beloved Everett bands, there were a lot of new faces. And those newcomers loved Oliver Elf Army.

For starters, Martin and Mary Adams’ connection onstage is just So Cute. When one smiles at the other, the whole room lights up. Their music? It isn’t complex. Or is it? It’s funny. Or is it? The band’s insouciance when it comes to complexity (just a guitar and drums, and those drums filling in for the bass, the beat fairly consistent and gregariously ploddy) belies the hookiness in the riffs and the sly wit in the lyrics. In any case, folks at The Blue Moon danced and strangers hugged each other whilst grooving along to songs about addictive opiates (“Dilaudid”) and hallucinations involving 80’s pop singers (“The Ghost of Simon LeBon”). The band’s new EP, Telescope, is due out next month, and it expands OEA’s repertoire in a very good way.

Headliner goawaysun’s set was split into two parts, the first featuring the trio of Hilary McGowan on guitar and keys, Henry Yarsinske on bass, and Wade Oberlin on theremin and keys. All of the members are DJs at KSER, Everett’s public radio station. It was their first live performance in this configuration, and there were definitely some jitters going on. McGowan’s songs are full of quirk as well as what can only be termed as intentional shallowness. Songs about being in love made note of the side benefit of being able to use the carpool lane when she’s with her “boo” and also included her willingness to do crack with the one she’s so enamored of. It was funny stuff that was goofy in and of itself; the performance was by no means professional, but it made people smile. It was also a special treat to see a theremin onstage; Oberlin used not only his hands but his entire torso to play the intriguing instrument.

The second half of goawaysun’s set was definitely dance-worthy, with electronic tracks pumping up the collective heartbeat. McGowan’s wry lyrics (“I love making PowerPoints. I love making fried chicken fly across the screen.”) were pure stream of consciousness, if that consciousness were singularly aware of IT and social media platforms. This is where goawaysun shined. Her backup group for this part of the set, called Velvet Grapes, danced on and off the stage, blowing bubbles and gifting folks with bunches of fake flowers while wearing glittery masks and interjecting their own lyrics into McGowan’s already freeform observations. The accompanying light show added to the dance vibe on what was a fine Saturday night.

Christine Mitchell has been poring over album liner notes pretty much since she acquired the skill of reading, and figured out the basic structure of rock songs at an early age. Whether it’s the needle popping into the first groove of the record, the beeps that signal the beginning (or end) of a cassette tape, or digital numbers ticking off the seconds from zero, music brings Christine happiness, ponderous thought, opportunities for almost scientific study, and sometimes a few tears. When she started attending live shows two decades ago, a whole new piece of the puzzle clicked in and she has been hooked ever since.
Related ItemsBlue Moon TavernChristine MitchellDada FructoseFeaturegoawaysunNail HousesOliver Elf Army
← Previous Story The Morning After Album Release Party at Louie G’s Pizza
Next Story → A Night of Rock and Blues at Highway 99 Blues Club