20 Years of Ska and Punk at Showbox 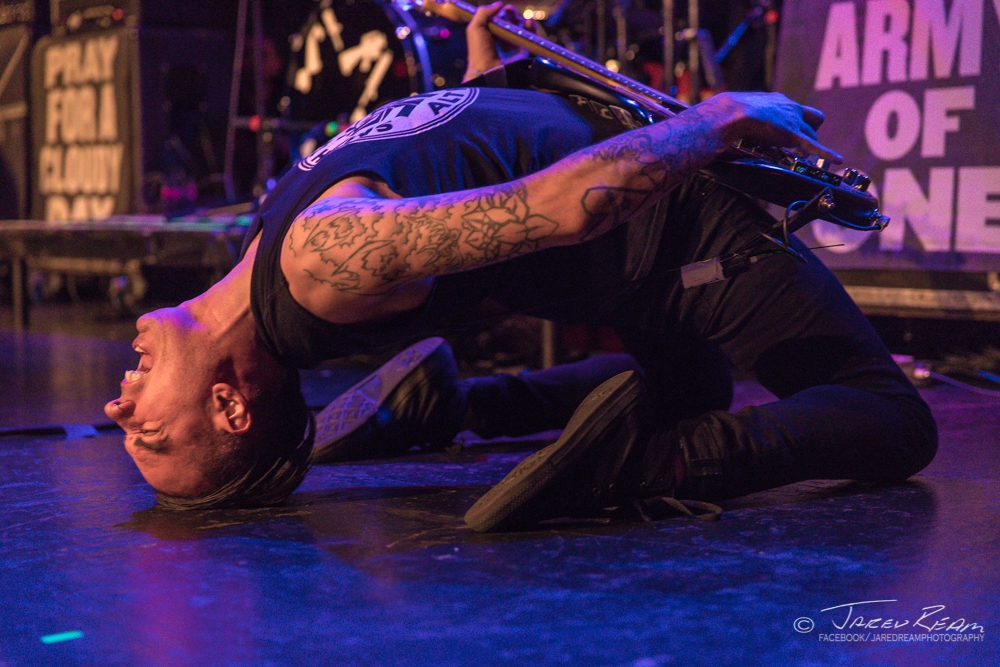 Saturday night was a night of punk and ska! Old and new punks along with ska fanatics young and old packed into the Showbox Market to celebrate the 20th anniversaries of Reel Big Fish’s Turn Off The Radio and Anti-Flag’s Die For The Government.

Kicking off the night was Pkew Pkew Pkew, a quartet from Toronto, Ontario. They started the night off with high energy and had the heads of punks bopping along with the grooves they were laying down. Their catchy punk anthems were a whirlwind, from the facial expressions of bassist Emmett O’Reilly to the hair-whipping rhythm coming from guitarist Ryan McKinley. Leading the vocals of this quartet was Mike Warne. All of this energy wouldn’t have been possible without drummer Dave Laino, who pounded the skins like a mad man… a mad man with class. Definitely a good way to start the night.

The second act of the night was Ballyhoo, a punk and rock band from Maryland that had just a touch of reggae influence in their music. They brightened the stage with a young energy, sounding reminiscent of bands like 311 and Blink 182. Ballyhoo got on stage, grabbed hold of the energy that Pkew Pkew Pkew laid out, and took it for a ride at frenzied levels.   Lead singer and guitarist Howie Spangler’s vocal range was impressive, and aptly supported by keyboardist Scott Vandrey’s fast keystrokes. Vandrey would leave the confines of the keyboard and interact with the crowd as if he was the front man. Laying down some absolutely funk-filled bass riffs was Nick Lucera, who put as much energy into playing as he did running around the stage; a bass player with no problem with coming out of the shadows. Donald Spangler held the whole gang together with perfectly timed drum kicks and splashes. This band was definitely the gust of air the ember needed to keep the fire of the night going. But soon, a liter of gasoline was about to be thrown on that little fire of the night in the form of a Molotov cocktail, jettisoning the night into a raging fire.

Pittsburgh natives Anti-Flag took the stage in front of a giant upside down flag, and their energetic set really got the crowd moving. They started by performing songs such as “Fuck Police Brutality,” and “Your Daddy Was A Rich Man, Your Daddy’s Fucking Dead,” a song that lead singer Justin Sane said he wrote after reading a magazine article about a certain narcissistic real estate tycoon from New York. At one point during their set, bassist Chris Barker told the crowd “I know it’s kind of tight in here, and there’s not a lot of room, but I wanna see a circle pit, and I want to see it NOW!” Between the circle pits, crowd surfers, and general moshing, the night was sticky and the energy infectious. Sane talked about the state of the country and how protesting is a good thing that needs to happen. He explained the meaning of an upside down flag, and how it represents someone in need of help. “As long as things are going the way they are in this country, this flag will always be upside down” explained Sane. This brief conversation with the crowd allowed the frenetic drummer, Pat Thetic, to take a short breather. It was obvious that everyone was having a blast screaming along to the songs that inspired many. As Anti-Flag’s set came to a close, they performed a cover of The Clash’s “Should I Stay Or Should I Go” before sending bassist Barker and drummer Pat Thetic into the crowd to perform ‘Brandenburg Gate’ while rhythm guitarist Chris Head and Sane stayed onstage.

Headlining the night was Reel Big Fish, who are from California. They were an obvious change from the boys in Anti Flag, one from political activism to happiness and cheer. The artists bounced and danced on the stage with their instruments. The set went from songs about someone’s rich daddy to songs about wanting girlfriends. But this change of gears and pace didn’t stop the room. The crowd surfing continued, and the energetic crowd became frenetic. Decked out in typical ska attire, Aaron Barrett led his fellow musicians as they came on stage with the song “I Want Your Girlfriend.” This was followed by “Another Fuck You Song,” which led into “Your Guts.” Barrett paused only briefly, explaining how it’d been 20 years since Turn The Radio Off was released. Reel Big Fish then went straight into the first song on that album, “Sell Out.” Matt “Saxl Rose”Appleton was on saxophone along with band mates John Christianson on trumpet, Billy Kottage on trombone, Derek Gibbs on bass, and Ed Larsen on drums. They kept the stage moving with their energetic playing and dancing, cruising through their entire set.  After a brief pause, Reel Big Fish encored with a great selection of songs, ending the night with what most ska kids call one of the most important covers in the genre: “Take On Me,” originally made famous by A-Ha in the 80’s. This track ended a night that had a variance in emotions, causes, and feelings, but ended on a high bright note.

Reel Big Fish Set List:
Sell Out
Trendy
Join The Club
She Has A Girlfriend
Snoop Dogg
241
Everything Sucks
S R
Skatanic
All I Want Is More
Nothing
Say Ten
I’ll Never Be
Alternative Baby

Encore:
I’m Cool
Asshole
Where You Been
Take on Me