By Mike Baltierra on March 1, 2017@baltierraphoto 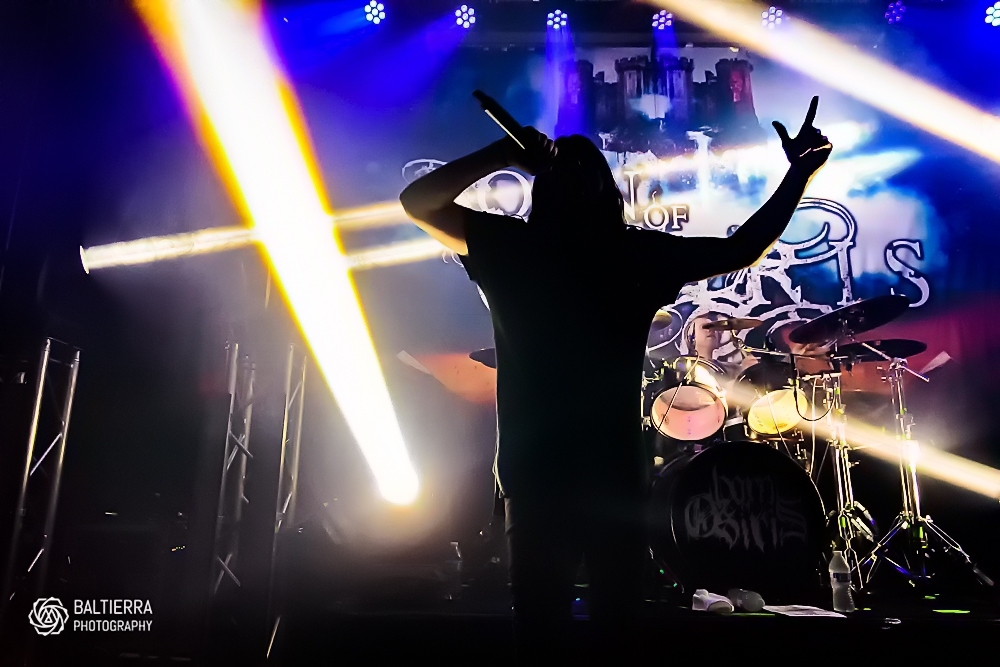 Chicago based deathcore band, Born of Osiris, are currently on a tour spanning across the United States, celebrating the tenth anniversary of its The New Reign album. Included on the tour are Volumes, Oceans Ate Alaska and Fire From the Gods. Sadly, Within The Ruins were not able to perform due to problems with transportation and inclement weather they encountered on their way to Studio Seven in Seattle.

Getting the evening started to an already packed house were Fire from the Gods who hail from Austin, TX and released their Politically Incorrect EP in 2013, and their first full length album, Narrative, in 2016. The audience were fired up and FFTG were equally pumped as they delivered a crushing 30 minute set. The band consists of AJ Channer (Vocals), Jameson Teat (Guitar), Drew Walker (Guitar), Bonner Baker (Bass), and Richard Wicander (Drums). They played songs that many in the crowd were very familiar with. “Excuse Me,” “Lifeline,” and “End Tranmission”, won over many a new fan and pleased those who knew who FFTG were. The fans showed their appreciation by having a huge circle put during FFTG’s set.

Next up were Oceans Ate Alaska, based out of Birmingham, UK. The progressive metalcore band also played a quick and highly energized set. The band is made up of Jake Noakes (Vocals), James Kennedy (Guitar), Adam Zytkiewicz (Guitar), Mike Stanton (Bass), and Chris Turner (Drums). The band ripped through “Blood Brothers,” “Floorboards” and “To Catch A Flame,” at which point the band took a quick break and invited a couple of fans, who happen to be boyfriend and girlfriend, on to the stage. The boyfriend proposed, and she accepted! Thus, the rest of the set was then turned into an engagement party.

Next were American metalcore band, Volumes, who took the stage and immediately the crowd went bonkers. As the band jumped around on the stage, this enticed the crowd to do the same. Vocalists Gus Farias and Mike Terry not only complement each other’s singing and vocal styles, but they were very involved with fan interaction. Both would stand on the barricade in front of the stage or make their way into the crowd. Bassist Raad Soudani, guitarist Diego Farias and drummer Nick Ursich we exceptional, despite some sound issues that initially plagued guitarist Farias.

The band played a solid eight song set that had those in the front of the audience jumping but had the rest of the crowd moshing and crowd surfing – which kept the security team pretty busy making sure people didn’t hurt themselves or anyone else. A few brave and brazen concert goers made successful stage dive attempts. The crowd was so crazy that singer Farias told the packed crowd that the craziest surfer would get free merchandise as the band kicked into “Pistol Play.” The band played a good selection off of both of their releases, Via and No Sleep. “The Mixture”, “91367”, “Feels Good” and “Wormholes” were awesome to hear live. The band also played a new song “Left4Dead” which is off of their new release Different Animals which will released on June 9, 2017.

Finally hitting the stage were Born of Osiris, who played their album The New Reign in its entirety. With a large number of strobe lights, high intensity and multicolored lighting, as well as large amounts of fog, which made the band members look as if they were silhouettes, they tore into the album’s opening track “Rosecrance”. Ronnie Canizaro (vocals) and Joe Buras (clean vocals and synthesizer), along with Lee McKinney (guitar), Cameron Losch (drums) and David Da Rocha (bass), played each of the albums tracks in order. “Empires Erased”, “Open Arms To Damnation” had everyone moshing, stage diving and head banging.

The band also played fan favorites off their later albums such as “Recreate,” “Machine,” “Divergency” and “Throw Me in the Jungle.” The band performed a set that lasted just a little more than an hour, which had the sweaty and tired audience begging for more. And they finished the night with”Goddess of the Dawn”.

The New Reign Tour, winds through the US and concludes on March 19 in Chicago.

Encore:
Goddess of the Dawn