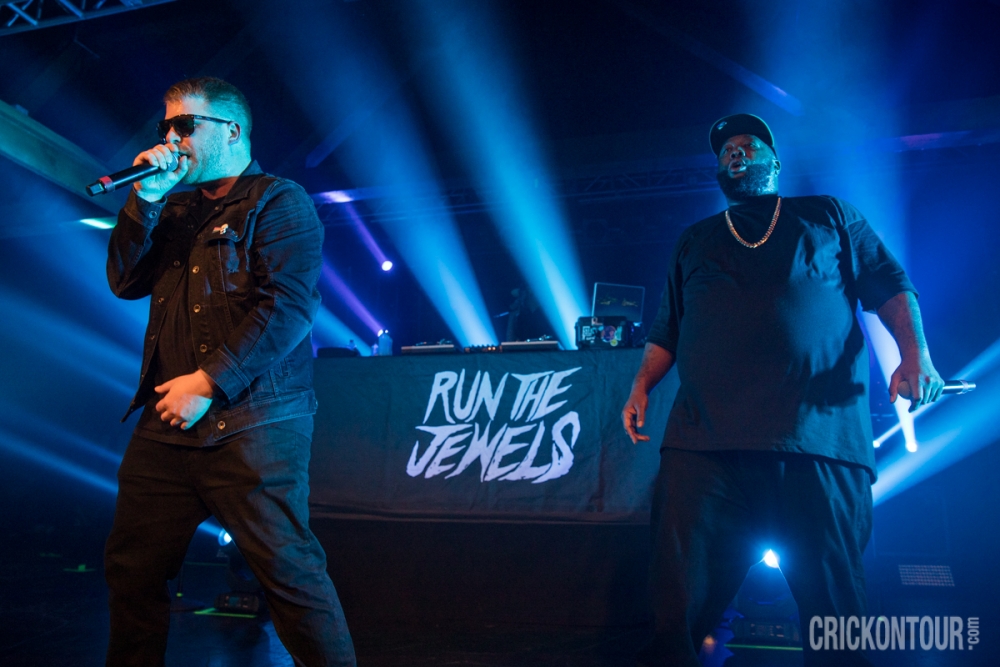 In the last few weeks of 2016, most of us had a list compiled of the best records of the year. But alas – Run the Jewels‘ newest release RTJ3 slid into your brains (and for some, into your DMs) in the final days of the year as a Christmas present. This month EL-P and Killer Mike brought their incomparable live show to the Showbox Sodo for what felt like the biggest and best underground rap party this side of… Lake Washington. But seriously though, in the midst of political animosity and uncertainly, it was the kind of show that people needed.

The night opened with a couple of DJ sets from Nick Hook, and Cuz Lightyear. Gangsta Boo of Three 6 Mafia switched gears a bit with her southern gangsta rap, and she got the crowd pretty hyped in the process. However, Gaslamp Killer really got the night going. His set ranged from ad-libbing on Childish Gambino tracks to spinning original stuff on the spot. His uplifting energy was a perfect opener for Run the Jewels, while still being a stark contrast. One of the songs he did – no joke – was an operatic vocal performance from a nun in the middle of America mixed with middle-eastern dance beats. His music – like his Jewish-Turkish-Lebanese-Mexican heritage – is a melting pot, and a delicious one at that.

After being thoroughly entranced by Gaslamp Killer’s intense and intricate rhythms, Run the Jewels took the stage to raucous applause. I’d never seen so many people try and keep up with singing along with hip-hop. That’s not easy. That’s devotion. We got a fantastic selection of new songs off RTJ3 (which is perfect by the way if you need some loud music to run to) and some older hits like the eponymous “Run the Jewels” off their first LP, and “Blockbuster Night Part 1” “Close Your Eyes and Count to F*ck” “All Due Respect” and “Lie Cheat Steal” off RTJ2. The last of which was one of the highlights of the night, when Killer Mike introduced it referencing certain current events regarding individuals with everyone in the crowd practically screaming along, “LIE, CHEAT, STEAL, KILL, WIN!” The man had literally just come from speaking at a Bernie Sanders event – which he frequently does – so politics was on everyone’s mind, seeing that the immigration ban had happened just two days prior.

Run the Jewels’ brand of hip-hop honestly borrows more things from punk and rock than most other artists in the genre. Its punchy, thumping beats make you want to headbang rather than wave your arms, and mosh pits almost feel critical to the songs. The themes and lyrics harken back to 90s rap legends like A Tribe Called Quest, but with more bass to blast through your subwoofer. Their live performances are the same way – you get some fancy colored lights, but it’s a no frills kinda show.

The music was loud. The lyrics were angry. The duo made little endearing jibes at each other’s weight, EL-P exclaiming to Killer Mike that “no photoshop in the world could make you look not fat.” EL-P kept his denim jacket on just long enough for photographers to only get pictures of him in it. And somebody brought their baby to the show. It was definitely an evening not to forget.

Now, in the words of Run the Jewels themselves:

Abby Williamson is a photographer, writer, and video blogger with a passion for live music – especially the local scene. She recently moved to Seattle after commuting from Gig Harbor for shows an average of once a week for five years, so she’s happy to not have to drive as much and photograph even more concerts! When she’s not elbowing her way up to the front row at a show or sorting through thousands of photos of those shows, Abby also does freelance wedding photography, all the while cultivating a decent-sized following on YouTube. Abby has contributed to several music blogs over the last five years (and she’s really excited to join the SMI team!), and has been published in at least one album booklet for the band, Someone Still Loves You Boris Yeltsin. She would like people to know that while music photography and writing is a huge passion in her life – she is a fan first, photographer second.
Related ItemsAbby WilliamsonAlex Crickel-pFeatureHip-Hopkiller mikeRapReviewrtj3Run The Jewelsrun the world tourSeattleShowbox Sodo
← Previous Story The Grinding Wheel Tour rolls through El Corazon
Next Story → Thunderpussy: authentic rock n roll