By Mike Baltierra on March 2, 2017@baltierraphoto 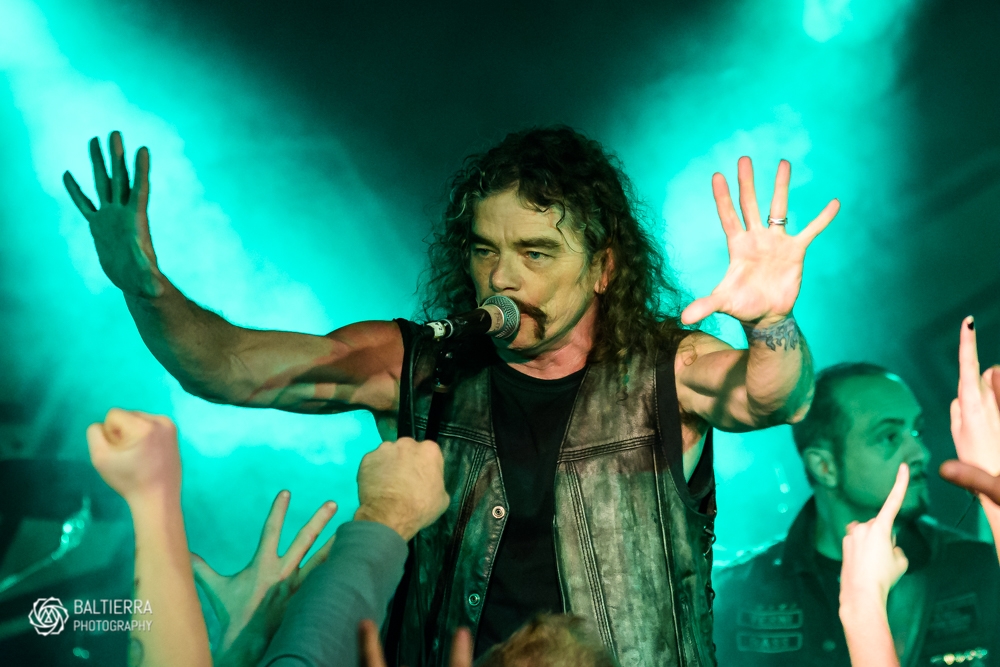 New Jersey based Wrecking Crew and thrash metal legends Overkill made a stop at El Corazon in Seattle. The band is currently touring in support of their latest offering, The Grinding Wheel, which was released on Feb 10, 2017 on Nuclear Blast Records.

The club was packed early with many a head banger, ranging from the youngest fans to those who have been loyal to the band since the beginning. They all came out early on this Wednesday night event to witness one of the longest lasting and consistent thrash metal acts. Overkill has been continuously churning out classic album after album and have been constantly touring for the better part of the last three decades.

As the lights dimmed and the band’s signature green lighting illuminated the stage, the bounding intro of “Mean, Green, Killing Machine” blared through the PA system. The band took the stage one by one, starting with drummer Ron Lipnick, then bassist D.D. Verni, followed by guitarists Dave Linsk and Derek “The Skull” Tailer, and lastly vocalist Bobby “Blitz” Ellsworth. Overkill took the crowd on a nearly two hour long, fifteen song set list. Tearing through classic cuts  “Hello From the Gutter,” “Infectious,” and “Feel The Fire,” as well as some of their latest offerings such as “Goddamn Trouble,” “Our Finest Hour,” “Electric Rattlesnake,” “Hammerhead,” and “Ironbound,” the band was on fire. The crowd sang, head banged and moshed with ferocious intensity – everyone got into the music. The crowd also sang along with the band’s signature catchy choruses.

Label mates Nile, who is made up of Karl Sanders (guitars / vocals), George Kollias (drums), Brad Parris (bass / vocals), and newly added Brian Kingsland (guitars / vocals) – who replaced recently departed long time guitarist / vocalist Dallas Toler-Wade, are providing direct support on this tour.  The band tore through fan favorites “Sacrifice Unto Sebek,” “Defiling the Gates of Ishtar,” “Kafir” and “Black Seeds of Vengeance.” The band put on a solid 40 minute set, which got the crowd primed and pumped for the headliners.

Also on the bill were local Seattle area favorites Kill Closet and Salem Knights. Both bands put on a killer show despite some technical challenges. Both these bands need to be on your radar.

Check out this tour bill as it rolls through your town.