The Joy Formidable Goes Quiet at the Triple Door 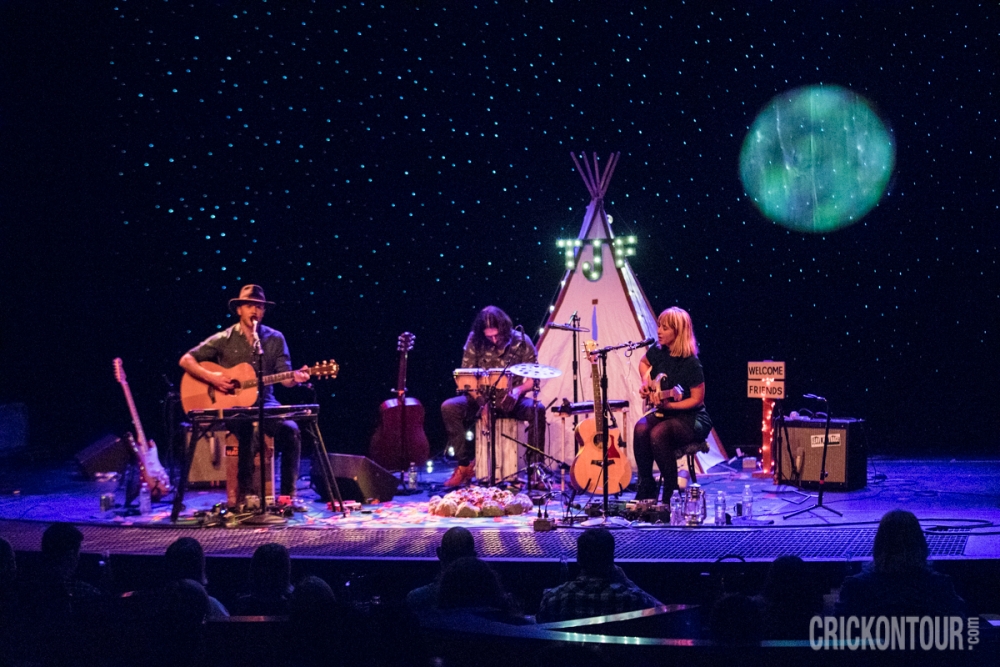 The Joy Formidable at The Triple Door (Photo by Alex Crick)

The Joy Formidable ditched their distortion-heavy studio techniques for a night of acoustic performance at The Triple Door last week. Though singer Rhiannon Bryan joked that they simply wanted to “save on lugging those heavy drums around,” the stripped-back format of the Welsh trio’s latest US tour allowed their moving vocal harmonies and songwriting prowess to shine in a new light for an audience that responded enthusiastically, both to their songs and their winning stage banter.

Their performance was preceded by one from opening act Ohmme, a Chicago duo who made their first visit to Seattle count with a series of songs built around members’ Sima Cunningham and Macie Stewart’s guitar interplay and intricate back-and-forth vocals. Their obvious musical rapport made for a series of haunting harmonies building to more chaotic reverb-soaked solos, a worthy prelude to The Joy Formidable’s performance.

The longer Ohmme played, the more difficult it became to ignore the untouched setup around them — a glowing plaster campfire in the center of the stage, a tee pee bathed in blue light just behind it, and a starry sky projected onto the black curtain. A conspicuous sound effect of fire crackling began as The Joy Formidable first took their seats onstage and comment on the faux-Western scenery around them.

Still, the stage design achieved its desired effect, making the band seem less like performers onstage and more like friends swapping songs around the campfire. They explained their songwriting processes between song introductions, frequently interrupting each other to offer corrections, the way close friends often do. At one point they even asked for song requests and jokingly begin strumming the chorus of “All Star” by Smash Mouth.

Their set began with “The Ever-Changing Spectrum of a Lie” from their 2011 debut The Big Roar, kicking off a performance that favored songs from their first two LPs as well as those from 2016’s Hitch, which only hinted at the band’s quieter side better displayed on their most recent EP Sleep Is Day. Impressively, The Joy Formidable’s songs were no less propulsive in this acoustic format, almost all of them reaching an eventual fever pitch of swelling harmonies and finger-picking interplay. The quieter moments, however, often proved just as powerful as these musical climaxes for the contrast they created.

The Joy Formidable has long been a band defined by contrast, their shoegaze-esque sound presenting a battle between vulnerable vocal melodies and unhinged guitar noise or, as singer and bassist Rhydian Dafydd Davies once said, “between the eternal optimist and the manic depressive.” In a testament to the band’s songwriting, this fascinating contrast and emotional catharsis was still present that night, even if the guitar noise wasn’t.

Vocalists Bryan and Davies regularly swapped out acoustic and electric guitars to suit each song, while drummer Matthew James Thomas relied primarily upon his cajon and a pair of bongo drums as percussion so as not to overpower his band mates. Beginning with their 2013 album Wolf’s Law, the band’s songwriting process has been to begin each song with only vocals and a single accompaniment to start, an approach that emphasizes vocal melody and pays off big time when the songs are played in a simpler setting such as this. Thanks in part to the electric guitar echo and a sparingly-employed glockenspiel, each song sounded as full and complete as ever — particularly standouts like “Whirring.”

Green lights imitating the aurora borealis materialized across the curtain’s starry sky by the time the band ended their initial set, with rain storm sound effects playing them off. They didn’t make their adoring crowd wait long for an encore, returning shortly with a Davies bringing along a frying pan of fake plastic eggs and Bryan a panting black lapdog, which she explained they had adopted in Arizona. One audience member even came onstage to give the dog a treat before Davies had finished doting over him.

“Who else brought dog treats to our gig?” Thomas asks before the dog was taken offstage and the final song began with a moment of a capella harmonizing that saw Davies and Bryan reaching new highs, both in terms of vocal range and ethereal beauty. After a performance like that, there were few left to doubt The Joy Formidable’s versatility as performers and songwriters.