By Christine Mitchell on March 4, 2017@Housetornado37 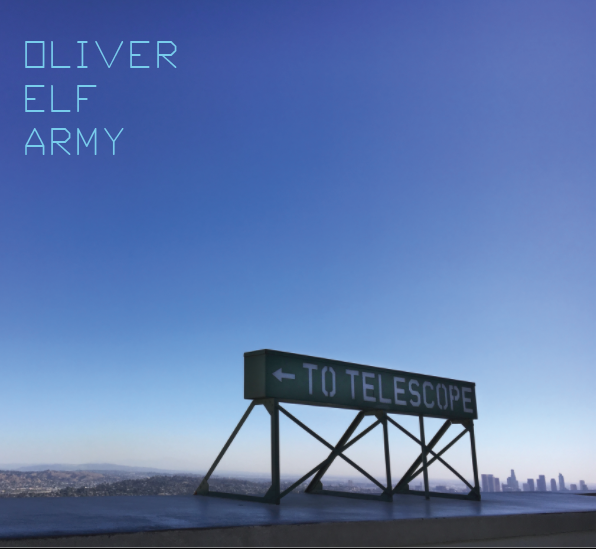 Oliver Elf Army‘s Telescope EP, out on March 11, is aptly named for a couple of reasons. On one hand, it’s an offhand reference to Telescope’s lead single “Black Nikes” and its space-cult content. But on another level it’s the perfect descriptor for a clutch of songs that take a piercing look into the past, sometimes with longing and sometimes with horror. But underneath these things is a sweet, wry humor that is delectable, and arching over the whole thing is an impeccable, concise musicality that is supremely catchy for a seemingly simple guitar and drum duo. Telescope could easily be one of the best things you’ll hear all year.

First things first: the drums on this EP sound like Mary Adams is playing them while sitting on your chest. Your heart wants to go “thump-THUMP,” but Mary’s drumming is a relentless pounding that forces your blood to pump to the beat she chooses. There is a lot of bass drum and just a bit of tambourine work. Having the drums hit you like a wall in the front allows guitarist Martin Adams to fill the rest of the sound space with layers of guitar, which he does with aplomb. His riffs are snarly and driving, with pedal work that creates lush atmosphere, especially when he allows notes to ring out. Kudos to co-producers Simon Nicol and Alex Taschereau, who truly outdid themselves on this effort.

Telescope kicks off with “Electric Snare,” a peppy song that embraces and reviles the 1980’s by turns. “I love the swish of my grey nylon pants, and I love the way we don’t touch when we dance” sings Martin, right before begging “nostalgia, nostalgia, please God don’t let them take me back there.” These droll lyrics are couched in washes of soaring guitar and a drum riff that gives the whole thing an uncomfortable, anxious vibe, and it sets the scene for the songs that follow.

“Judy Do You Ever Miss Hell” is a fantastic and funny ode to middle school cattiness. Judy is labelled a “demonic informer” by the narrator, who dreams of meeting Judy in the future, at which time “revenge will be mine.” The song’s sound is sinister pop, and Martin and Mary’s entwined vocals during the chorus, chanting “Judy do you ever miss hell, do ya Judy, Judy, Judy do you” captures peer to peer hatred; in fact, the lyrics truly sound like they’re coming from an indignant, not-yet-adult tween, ludicrous threats and all. The peak of revenge involves knocking a baked potato off a cafeteria tray; it’s laughable and ineffective in practice, but it’s the perfect ending to this song.

The most complex story here takes place during “The Ghost of Simon LeBon.” Martin starts off by singing “There was an accident!” in an overly dramatic manner before Mary comes in with a stubbornly plodding, dirgey beat. Martin’s riff during the verses is quirky and angular as he relates the gritty circumstances of an accident and an overdose (“It was a tragedy!”). Suddenly it appears that it may have been the narrator’s overdose; he urges a nurse to “keep it coming, I can feel my brains are humming” before proclaiming that he’s hallucinating, although he insists that he hasn’t “taken anything.” And interwoven through this narrative is the lead singer from Duran Duran, Simon LeBon himself. Again, it’s goofy, and again, it’s breathtaking in its execution. The whole thing comes to a head in a magnificent coda with “doo-doo-do-doos” lifted directly from Duran Duran’s “Rio.”

But the true pinnacle of Telescope lies in its epic closer, “Black Nikes,” when the humor present throughout the EP morphs into heartbreaking sadness. “Black Nikes” takes on Heaven’s Gate cult’s mass suicide, which took place in 1997, and, although it is easily the most fast-paced and driving song on the EP, it is also the most sympathetic, taking a movement that came to a tragic end and turning it into a love story. The first half is a headlong, almost joyous race to death, with Martin insistently singing “put a purple cloth on my face and kiss me goodnight forever, put my Nikes on, my Black Nikes on.” The pace is exhilarating and the actions described are gruesome, yet the mood is jubilant. There is even celebratory tambourine. It’s the story of someone finally getting to their lover, however twisted. Halfway through, though, the end has come, and it’s a tearjerker. Indeed, the refrain “all that I wanted to do was to explore space with you,” repeated ad infinitum by Mary in the second half of the song, while referring to the cult’s belief that their souls were being taken by a spacecraft trailing the Hale-Bopp comet, is also a beautiful statement of faith and devotion. Telescope softly fades away to the aural image of “38 ancient astronauts headed for better things” and ambient noise. Listen to “Black Nikes” here:

Telescope is a four song triumph that your ears need to hear. Oliver Elf Army is celebrating the EP’s release with a show at The Anchor Pub in Everett with support from Sleepover Club, Moon Human, and Nail Houses on Saturday, March 11th. In the name of quirky, dark, comic consistency, it’s also the twentieth anniversary of the Heaven’s Gate mass suicide. Darkly funny yet totally adorable: it’s Oliver Elf Army to a tee.

Christine Mitchell has been poring over album liner notes pretty much since she acquired the skill of reading, and figured out the basic structure of rock songs at an early age. Whether it’s the needle popping into the first groove of the record, the beeps that signal the beginning (or end) of a cassette tape, or digital numbers ticking off the seconds from zero, music brings Christine happiness, ponderous thought, opportunities for almost scientific study, and sometimes a few tears. When she started attending live shows two decades ago, a whole new piece of the puzzle clicked in and she has been hooked ever since.
Related ItemsAnchor PubChristine MitchellFeatureOliver Elf ArmyTelescope EP
← Previous Story Interview: Mike Schleibaum of Darkest Hour
Next Story → Ann Wilson at The Moore