Architects Performs to a sold out Studio Seven

By Mike Baltierra on March 16, 2017@baltierraphoto 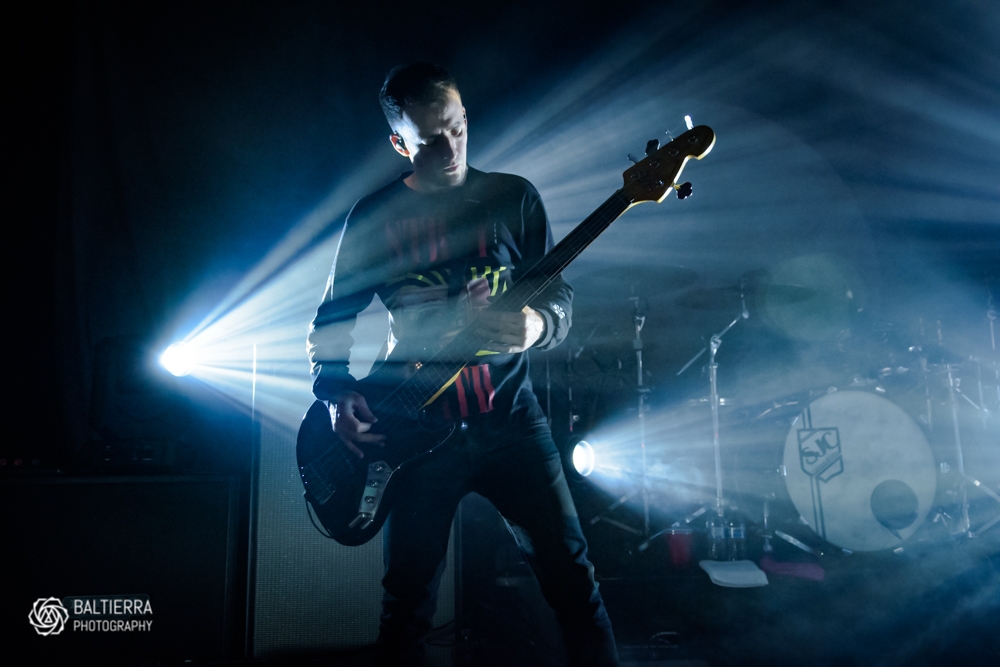 Studio Seven was left with standing room only as people came out to see Brighton, England based metalcore band Architects. The band is currently touring in support of their latest release All Our God Have Abandoned Us, and it is the first tour for the band since 2014.

A large backdrop of their latest album hung from the drum riser, and large amounts of strobe lights and lighting rigs were being set up as the final preparations were made prior to the band making their way to the stage. The crowd was growing restless, chanting “ARCHITECTS! ARCHITECTS! ARCHITECTS!” as they waited impatiently.

Then the lights went dark, and the fog filled the club. The band, which is made up of Sam Carter (vocals), Dan Searle (drums), Alex Dean (bass), Adam Christianson (rhythm guitar) and Sean Delander (touring guitarist), tore right into “Nihilist” and the crowd was immediately whipped into a frenzy. The crowd sang along with Carter as lights, strobes, and fog made for awesome lighting effects, especially the back lighting, which gave the band a silhouette image as they played.

The band then launched right into “Deathwish” and immediately followed up with “These Colours Don’t Run” and “Dead Man Talking.” Carter then took a minute to thank everyone for making their tour special and for coming out to see them.

Architects’ set consisted mostly of material off of All Our Gods Have Abandoned Us as well as Lost Forever // Lost Together. Carter’s vocals, the tuned downed guitars and bass, and the blistering pounding of the drums made for a sound that was brutal and intense. The band played with precision. They did not skip a beat and played each song to perfection.  “Phantom Fear,” “The Devil Is Near,” “Downfall,” and “Gravedigger” sounded amazing live.

Before Architects closed out their set, Carter told the crowd that they were “celebrating the life of their best friend and brother, Tom Searle.” Tom was the twin brother of drummer Dan; he passed way at the age of 28 from cancer. Tom had kept his illness from the fans, making his passing a surprise and shock to everyone who knew him. As Carter continued to speak, the crowd chanted “WE LOVE TOM!” over and over. Carter had to wipe away a few tears as they dedicated their final song of the evening, “Gone with the Wind,” to their lost but not forgotten comrade.

Alternative hardcore band from Long Island, NY, Stray from the Path were on hand as direct support. They are made up of Drew York (vocals), Craig Reynolds (drums), Tom Williams (guitars) and Anthony Altamura (bass) and their latest release is Subliminal Criminals.

Getting the evening started were Make Them Suffer who hail from Perth, Australia. Their latest release is 2015’s Old Souls.

Encore
A Match Made in Heaven
Gone with the Wind