By Mike Baltierra on March 16, 2017@baltierraphoto 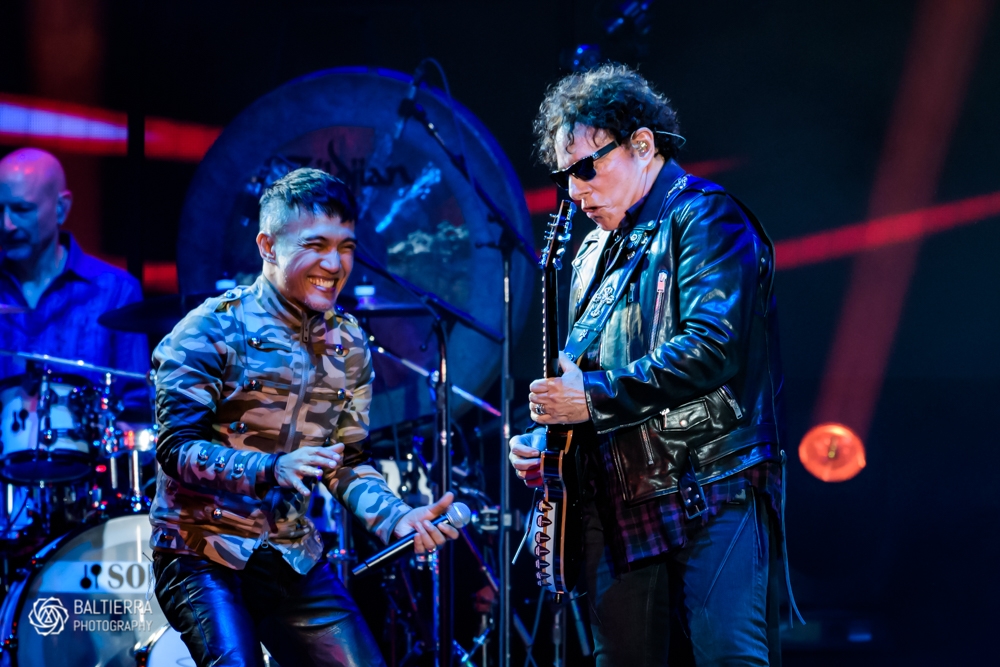 Legendary rock band Journey performed to a near capacity mid-week crowd at the Yakima Valley Sundome in Yakima WA. The band played a nearly two hour set that consisted of many of their greatest hits and singles that they are famously known for.  It was the first night of a tour that will have the band covering the US, wrapping up in El Paso, TX.

As the house lights dimmed and the fans rose to their feet, blue lights illuminated the stage as intro music filled the arena through the PA system. The band, made up of Neal Schon (lead guitar), Ross Valory (bass), Jonathan Cain (keyboards), Steve Smith (drums), and Arnel Pineda (vocals), launched into “Separate Ways (Worlds Apart),” followed up by “Be Good To Yourself” and “Only The Young.”  With Schon playing a sequence of harmonies on the guitar, the band then launched into “Stone in Love” and “Any Way You Want It.” At this point, there were no members of audience sitting in their seats. Everyone was standing, singing along with Pineda.

Schon then proceeded to take the microphone, thanking everyone for coming out and spending an evening with the band. He also asked everyone to pull out their lighters or illuminate their cellphones as the band proceeded to play “Lights.” Thousands of brightly lit phones could be seen, with people waving their arms and singing the song’s famous chorus.

Members of Journey were able to showcase their musicianship: Schon, with his intricate guitar solos, and Cain with his melodic keyboard solos. The best was saved for last, and Smith performed an amazing drum solo that had everyone screaming and clapping along.

As Journey concluded their set with “Don’t Stop Believing,” confetti was launched from multiple canisters in front of the stage, in back, and scattered throughout the area. As the confetti fell, the band left the stage to much fanfare.

The band then made their way back to the stage to delight of everyone who remained. The band finished the evening with an encore of “La Raza del Sol” and “Lovin’, Touchin’, Squeezin’.”

Opening the evening were legendary progressive rockers, Asia.  The band made their way to the stage as an image of their fallen band mate John Wetton was displayed on the large screen. Band members Carl Palmer (drums), Geoff Downes (keyboards), and Sam Coulson (guitars), were joined by Billy Sherwood (bass / vocals). “Only Time Will Tell,” “Soul Survivor,” and “Heat of the Moment” were highlights of Asia’s set, and they were greeted with a great response from the audience.