Ty Segall rocks Neumos for the third night In a row

By Kriston McConnell on March 20, 2017@Kristonisms 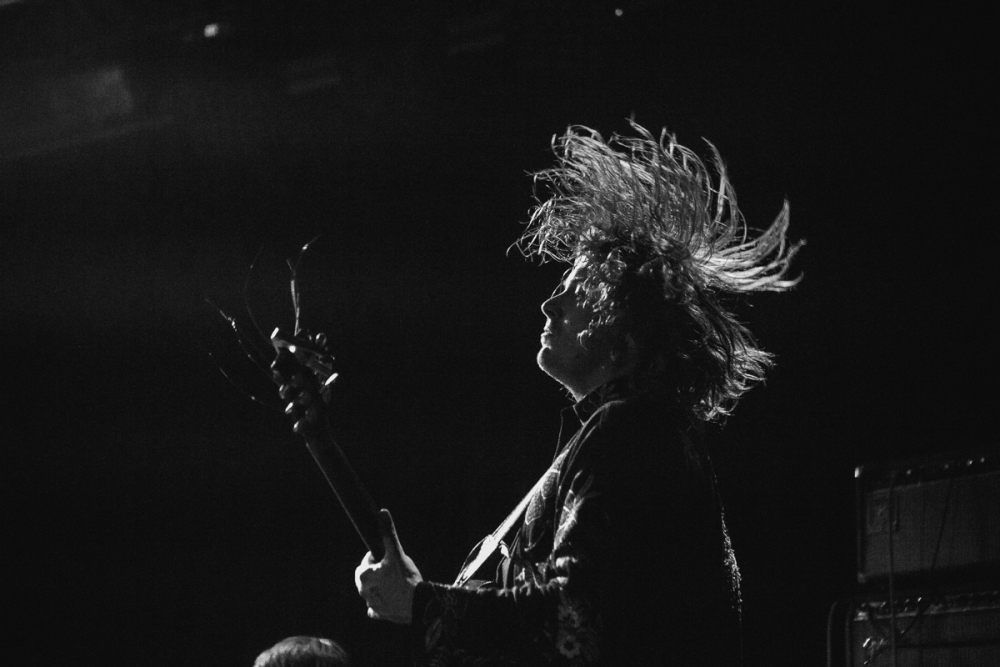 There is no shortage of awesome concerts in Seattle. On any given night, there’s usually something going on. This is especially the case on weekends – even in the winter time. The weekends are when the city sees its fair share of national touring artists. A recent national touring artist of note was California-based singer/songwriter Ty Segall. The musician performed at Seattle’s ever-popular venue, Neumos, not once, but three times – on March 2, 3 and 4. Seattle Music Insider caught him on his last night in Seattle before he took off for Oregon.

The opening act was actually not listed on the event. In fact, according to their singer, they had only been told that morning that they would be opening for Ty Segall. The band was the Seattle-based all-female punk outfit Mommy Long Legs. Considering they had not known they would be performing that night, they did pretty well. They had one false start early on, but every other track appeared to be seamless. If there were any errors, the audience was none the wiser. Their tongue-in-cheek songs are a mix of humor and malcontent. One of the more memorable songs on their repertoire was titled “Assholes,” which is the title track of their EP released in October 2016.

The next opening act was another Seattle-based group, named NailPolish. By this time, the venue was mostly filled up, and the crowd was ready to start dancing. In fact, a few of the audience members near the stage began moshing and dragging unsuspecting observers into the foray before they knew what was happening. Forcing people to mosh isn’t awesome, and between songs the drummer, known as Gems, and took a moment to chastise the fans who were forcing people to mosh. Their brand of garage punk consists of short, crunchy songs with fiery energy. Most of their tracks are under three minutes in length, so they fly through them at breakneck speeds. So it is understandable that some fans were pumped up by the performance and began to mosh.

By the time Ty Segall entered the stage, the venue was roaring with anticipation. This might have been his third Seattle performance in as many nights, but that did not put a damper on the crowd’s enthusiasm. Saturday night’s show sold out, and for good reason. With such a large amount of songs at his disposal, Segall can put together a setlist that would be appealing to any fan. With his charismatic stage presence, he could perform any song that he wanted to.

As to be expected, Segall performed a number of hits that the audience lost their minds over. These included songs like “Candy Sam,” “Manipulator” and “Finger.” His every action is intentional – pausing his movements and lingering on music notes long enough to draw excitement from the crowd. He likes to have fun with everyone and sort of teases the audience a bit. Fortunately, fans did not have to wait too long for Segall to perform his encore tracks. The venue burst back to life as soon as the first notes erupted from the stage. Before too long though, the last song was finally over, and Segall’s band let out one final, drawn out breath before leaving the stage.

For those who have not had the opportunity to see Ty Segall live but enjoy his music – they are sorely missing out. The energy in his shows is well worth the time and effort. Concertgoers can also usually expect to see one or two local opening acts, which can be a treat in itself. Segall is an entertaining performer with an impressive repertoire at his disposal. The next time he comes through Seattle (especially three nights in row!) be sure to check him out live. In the meantime, fans can purchase and listen to his self-titled studio album that was released back in January.

Kriston began her writing career as a passionate music fan. She attended dozens of shows, purchased CDs, vinyl and even cassette tapes of artists she barely even heard of. Shortly after joining a band's street team she happened to meet blogger Jacob Tender (now with Alternative Press) who asked her to write for his blog. After a couple of months he joined the staff of Under The Gun Review, and brought her along for the ride. After spending four years as a major contributor to the publication she moved on to be a web content contributor for New Noise Magazine, whose print magazines have a national reach.
Related ItemsFeatureJake HansenKriston McConnellMommy Long LegsNailPolishNeumosTy Segall
← Previous Story Interview: Cosmos Discuss New Mixtape, ‘Moonshine’
Next Story → Bradford Loomis, Lowlands celebrate new music releases