Panic! At The Disco’s Emo-Pop Extravagance 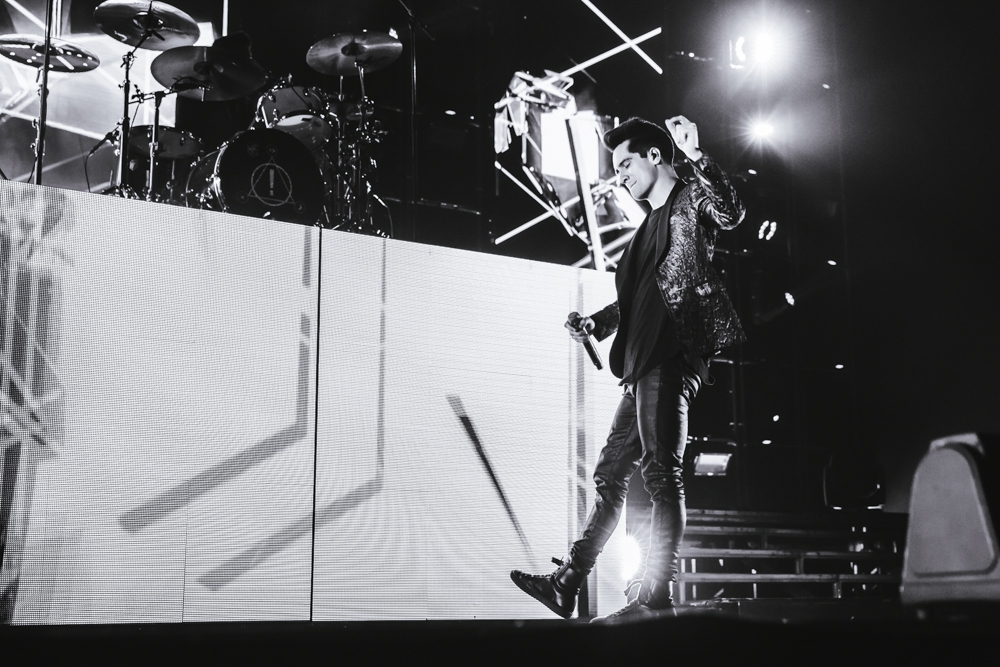 Panic! at the Disco at WaMu Theater (Photo: Sunny Martini)

A line stretched longer than an actual football stadium to get into Panic! At The Disco, live at Seattle’s WaMu Theatre. Teens and parents alike streamed through the gates, many stopping to purchase branded tote bags stuffed to the brim with band merch. Carts rolled the arena floor hawking light-up blue devil horns, which made their way onto the heads of enthusiastic fans. For PATD are nothing if not extravagant. And they’ve been churning out emo-pop anthems that flirt with the dark side while retaining their sequined shine for thirteen years, garnering fresh fans all along the way.

The night opened with LA indie-pop band Saint Motel, who set the show up nicely. After first track, “Cold Cold Man,” lead A/J Jackson stated “We’re gonna ask you guys to do a lot of things tonight, including singing. So sing with us.” And that’s exactly what the crowd did, clearly in the know about their radio-friendly, horn-section-laced tracks. They were big and funky and did the hard work of getting the massive crowd enthusiastically warmed up.

They were followed by Misterwives, an alt-pop six-piece out of New York known for their colorful live performances. After coming on stage to “Pure Imagination” – of Willy Wonka fame – it didn’t take long before the crowd was singing and clapping along. Lead singer Mandy Lee was a force to be reckoned with, dancing all over the stage without skipping a beat. Major horn solos were as big as her voice, while their bouncy choruses and a stripped-down “Vagabond” connected with the crowd.

At that point, the room was overflowing with positive vibes, which led perfectly into PATD’s set. They kicked it off with “Don’t Threaten Me With A Good Time,” accompanied by an explosion of gold streamers and plenty of fans’ cell phones set to record. The sold out crowd must have been going for some kind of volume record, because their screaming throughout the show was at another level of intensity.

As the band worked their way through a 22-song set, the focus remained on frontman Brendon Urie, in trademark tight leather pants and spangled gold jacket. Every time he hit a high note, the crowd erupted in piercing shrieks. A slow moment during “Golden Days,” made it easy to discern that everyone was singing along with every word. Urie himself commented, “that is gorgeous,” just before a shower of golden pyrotechnics rained from the ceiling.

Near the end of “Miss Jackson,” Urie did his usual backflip, and then there was an actual intermission. They used it to break into Urie’s solo piano take on “This is Gospel,” a spotlight on him at center stage, before the loungy “Death Of A Bachelor.” The band’s oeuvre spans a history of musical reinvention and was on full display.

For already being halfway through the 90-minute set, no love was lost, and while he certainly didn’t need it, he had just endeared himself even more to the sweaty, screaming throngs of fans. If PATD are on your playlist, and you happen to have the luck to catch a ticket, get yourself to a live show whenever possible, as it truly is a show worth watching.