By Christine Mitchell on March 30, 2017@Housetornado37 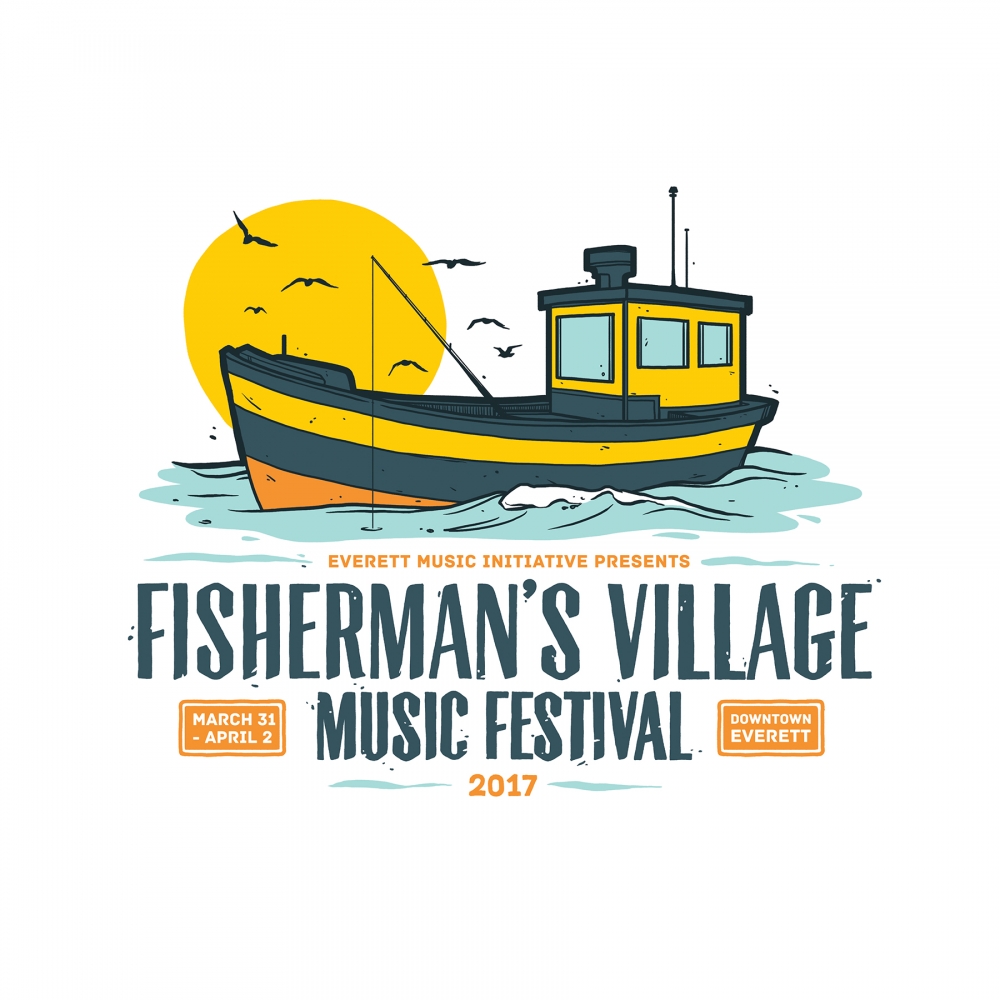 From the moment that Everett’s progressive monster Sleepwell Citizen takes the stage at Tony V’s early Friday evening to the moment Everett’s Crystal Desert shuts the festival down at The Anchor Pub on Sunday night with their doom punk, the Fisherman’s Village Music Festival will deliver the best lineup of any local festival this year. Spanning genres from rock to folk, from electronic to hip hop, you’re virtually guaranteed to hear bands that you love and also experience new music to become enamored of. Psyhedelic head-trippers will love The Moon is Flat, while straight ahead rock fans will devour Thunderpussy. The Anchor plays host to a slew of hip hop and rap artists on Saturday evening that features Sassyblack and DoNormaal. If you need an auditory break or get the munchies, make sure to visit the food truck festival or Everett Makers Market event.

What follows is the second installment of what we at SMI hope to make an annual tradition: the Fisherman’s Village Music Festival band Q&A. We sent the following questions to several bands who are new to the festival (excepting Spirit Award):

What is the origin of your band’s name?

What is your favorite drink?

Needless to say, the answers are divergent and illuminating. Read them below and train yourself up to festival readiness by listening to each band’s most recent releases. And don’t forget to pick up a wristband at the insanely amazing value of $35 for the entire weekend.

Naked Giants, a wild, garagey trio out of Seattle:

Band Name: Henry’s brother is, according to Henry, of the “big and tall variety”. He likes to walk around the house in the buff and one time Henry just thought “hey, you look like a naked giant”. so it’s about familial love, comfortability in your own skin, etc.

On Everett: I used to think that Everett and Everest were the same thing so I thought Mount Everest was really close to Seattle. I was wrong.

Band Name: A “nail house” is an urban development phenomenon where modern shopping and commercial buildings will be built around older, usually residential buildings. It’s particularly prevalent in China, often because of the landowner’s refusal to sell their family’s home to commercial interests. I like this name because 1) it represents anti-commercial interests and 2) I often feel like a stubborn outlier, like a nail house, in social and artistic circles.

On Everett: That’s a tough question to answer. There a lot of people I love here, and I think there is fair potential for a legitimate arts community to exist, but I also think that there is a lot of homogenization and favoritism that goes on in the Everett “scene”, as well as a general lack of self-awareness and perspective when it comes to seeing beyond this city. But I’m particularly excited about the younger bands that are coming out right now.

Drink? I like dark beer, and double rum & cokes. Bloody Mary’s on Sundays.

Legs, a band out of Brooklyn bound to make you dance. Two members hail from Snohomish County and two are from Ecuador:

Band Name: We were simultaneously looking for a name and chasing our first live performance –which happened here in Brooklyn– and our dear friend Lane Koivu who had come to our rehearsals yelled “you guys should be LEGS” from his side of the house… None of us could argue against that name. It immediately made sense to what was happening musically, and it felt infinitely superior that any of the options that were on the table at that point…
On Everett: For some of us (the Marin brothers), this will be the first time in Everett and that is really exciting. Nothing like getting to know the vibe of a city via a music festival. We hear constantly about how passionate the Everett audiences are when it comes to music, so we are looking forward to try and win them over.
Drink? There’s this hot drink called CANELAZO… it’s a must every time we’ve gone on tour in Ecuador. You can look it up on google, but the basics are sugar cane alcohol, naranjilla juice, and water bolied with cinnamon. Perfect for a cold night in the highlands.

Spirit Award, a dreamy band out of Seattle:

Band Name: I think it’s probably like 90% of band names…We wrote some songs, then said “what names would fit this music”, and Spirit Award stuck. Spirit Award was significant to me because of changes going on in my spiritual life, that led to some dark times, but ultimately made for some good writing material if anything.

On Everett: We love the kindness that we have received from people there, and the eagerness to hear new music. Also, Ryan Crowther who puts on the festival is quite possibly one of the nicest and well organized human beings.

Drink? Collectively I think La Croix is our favorite beverage. We go through a 12 pack on tour in a few hours.

Band Name: I thought if I named my band Sloucher it might improve my posture
On Everett: The smell
Drink? Starbucks PSL Frapp, 9 pumps

Jake Laundry, a one man extravaganza whose stage performance is not to be missed:

Band Name: I had recently moved in with my girlfriend and one day I was recording a song in our bedroom while she was folding her laundry on our bed. Listening back to the recording I’d just made, I could hear her mumbling to herself, “This is Jake’s laundry, this is Jake’s laundry!” My real name’s Jake Lindsay, so I thought Jake Laundry was just close enough for my friends to recognize whom it might be… Additionally, “Laundry” resonated thematically for me, because a lot of the songs on my album “Über Millennial” were inspired by my desire to dispel a toxic myth/fear that I feel too many artists have–especially male artists, but not always: too many of my friends fear that devoting time to a partner will stymie their freedom and creativity. A lot of cultural myths lead us to believe that love ties artists down instead of lifting them up–again, I think this is a fear taught to young male artists, especially. Think of Yoko Ono: she was always blamed for catalyzing the Beatles’ breakup, when in reality, John Lennon is quoted saying he wanted out of the Beatles years before he met Yoko (according to the three Beatles biographies I’ve read…). So by paying homage to things like laundry–a very domestic task–I was trying to rid myself of this irrational fear of losing my creativity to a relationship. Incorporating laundry into my artistic identity seemed like a fitting symbol for embracing domesticity, cohabitation, and these perceived labors of love that I think a lot of artists fear.
On Everett: I’ve been lucky enough to play the last three Fisherman’s Village Festivals with various bands, so Everett Music Initiative is close to my heart. I also like that Everett dome; Scotty from Fauna Shade claims it’s full of beaver pelts! #IKnowWhatsInTheDome!!
Drink? It’s either a Bubble Tea or a Negroni…

The Skyemonkey, an Everett-based duo whose epic songs will take you on a journey:

Band Name: The band name started as something generic and a bit flat. After letting it settle in we knew we needed to change it. One day the name SkyeMonkey randomly came out and we liked how it made us feel. We went around asking our friends what they thought and almost everyone of them laughed with a child like grin. After seeing that we knew we had our name.

On Everett: Everett fights and welcomes openly. It’s a bit rough but means well. We’ve met a lot of characters here, our favorites being the artists. On any given weekend you don’t know if you’re going to get rock, metal, indie, reggae, electronic, or even rap. This place is hungry and soon people will start to see that it has more to offer than they think.

Drink? Gatorade! We honestly drink way too much of it. It’s just as good as when we were kids. At this very moment there’s actually a large case sitting in our practice studio. Our favorites are blue, red, and sometimes purple.

Band Name: We borrowed our name from a Band album

On Everett: We haven’t been to Everett yet, but so far we like that we’ve been invited to play a really fun music festival with some amazing bands! 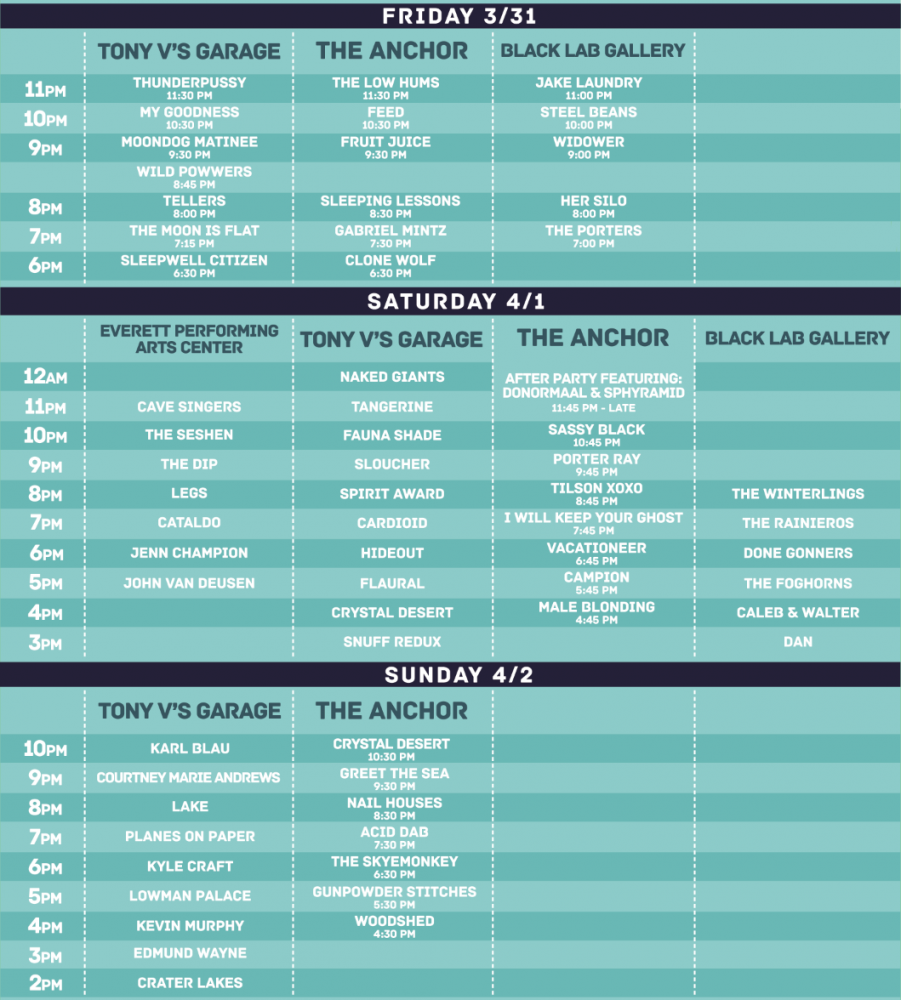 Christine Mitchell has been poring over album liner notes pretty much since she acquired the skill of reading, and figured out the basic structure of rock songs at an early age. Whether it’s the needle popping into the first groove of the record, the beeps that signal the beginning (or end) of a cassette tape, or digital numbers ticking off the seconds from zero, music brings Christine happiness, ponderous thought, opportunities for almost scientific study, and sometimes a few tears. When she started attending live shows two decades ago, a whole new piece of the puzzle clicked in and she has been hooked ever since.
Related ItemsChristine MitchellEverettFeatureFisherman's Village Music FestivalJake LaundryLegsMoondog MatineeNail HousesNaked GiantsSLOUCHERSpirit AwardThe Skyemonkey
← Previous Story Fisherman’s Village Fest 2017 Lineup Stuns
Next Story → Fisherman’s Village 2017 Proves That Everett’s Got It Going On