By Christine Mitchell on March 31, 2017@Housetornado37 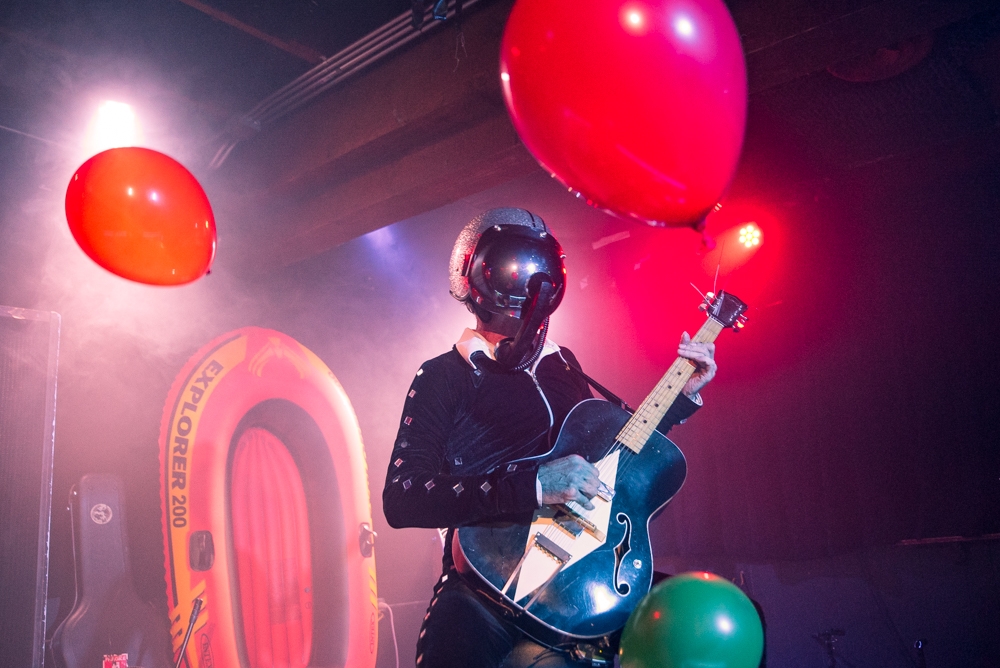 Bob Log III may be more machine than man. There is nearly no other explanation other than the superhuman for the way he constantly crisscrosses the globe on tour, playing night after night of shows. Only an automaton could play Delta blues slide guitar so quickly and relentlessly. It can’t just be just… *some guy* under that motorcycle helmet with the telephone receiver that’s been glued and re-glued to the face mask umpteen times. Preposterous.

The sold out Sunset Tavern was stuffy the night of Bob Log’s show, and it must be said first off that none of the night’s performances could be described as anything other than bold. Those lucky enough to arrive before show time were treated to a stage setup that would pique anyone’s interest. Opener Jake Laundry was projecting his Facebook page onto a screen that sat front and center at the foot of the stage. When his set began, Laundry appeared from behind the screen completely encased in a hazmat suit. From that point on, several levels of performance took place. One was Laundry’s constant stripping of layers, from hazmat suit to business suit, from slacks to basketball shorts, from those shorts to boxer briefs (which became a hat), to the removal of his t-shirt near the end. He was left in just his skivvies and his LED headlamp, which he wore because “you’re being recorded.”

Another layer was the social media/film aspect of the set, which was particularly illuminating. Video clips shot with camera phones paired with Laundry’s lyrics and various musings served to elucidate his literal stripping. At one point Laundry encouraged those in attendance to “#connect” with him by leaving photos and messages on his Facebook page, which he later read from his laptop between songs. And, of course there were songs. Jake Laundry’s music is playful while at the same time again digging into the layers of who we are and why we do what we do. Laundry questions masculinity, relationships, social media, the government…yet it comes across in a beautifully sweet package as he sings and plays guitar alongside his laptop tracks. Über Millennial ©, Laundry’s debut album, is something you should definitely check out.

Spinning Whips‘ set was the most straightforward of the night, which is really saying something when your frontman is hanging from the rafters while playing guitar at one point and singing into four microphones at once at another point. The six band members sweated it out in the stifling room, pounding through a set of hard-rocking, butt-moving tunes that featured keys, tambourine, and maracas. Jordan West was a ball of energy, whipping his head and guitar around, canvassing the tiny Sunset stage like a predator for quite some time before hopping off of it to grab a ladder and head to the ceiling. Spinning Whips are Seattle stalwarts, and they don’t look like they’re stopping anytime soon.

Bob Log III took the stage looking like John Travolta, sporting a white suit and his iconic helmet. It didn’t take much time for him to strip down (an homage to Jake Laundry?) to his usual velour cannonball suit spiffed up with mirrored accents. Log’s stage setup required a large amount of duct tape and a couple of bungee cords, and it quickly became apparent why: when he plays, whatever isn’t strapped down is liable to go flying. Everything was dialed to 11; the kick drum pounded and varying pedals sounded out varying levels of bass boom. This oddly dressed, thin man with limber fingers sounded like an army as gritty, filthy, down-home riff-laden rock songs piled up one after another. “Riverside,” “Shinkansen Teh!,” “Shake a Little, Wiggle it, and Jiggle it Too,” and more were pounded out.

The crowd was crazy; no one could stay still, and honestly, who would even want to try? A pit of sweaty, shoving bros formed front and center, and one enthusiastic fellow repeatedly spewed beer onto Bob Log, who seemed to take no notice. He definitely had vision issues when it came to seeing through his helmet. At least eight drinks were set near him on the stage, over half of which were knocked over by Log’s flying feet and a couple of which were swiped back later in the night. Log tossed a bag of balloons into the crowd, and soon they were inflated and floating about. Log stomped them in percussive punctuation to his music. He brought out the ubiquitous raft about two thirds of the way through the set, climbing in and held aloft by the crowd as he played. He made it around the room twice before being spilled back onto the stage. It looked like it hurt, but he simply got back up and kept on keeping on. Log was unstoppable.

There were two encores; the crowd didn’t want to let him go. A man hopped up onto the stage and took a long selfie video with Log (who again took no notice). Bob Log III is headed back home to Tuscon to take a break before the next leg of his crazy, never-ending tour. He will be back, and Seattle will greet him with enthusiasm.

Christine Mitchell has been poring over album liner notes pretty much since she acquired the skill of reading, and figured out the basic structure of rock songs at an early age. Whether it’s the needle popping into the first groove of the record, the beeps that signal the beginning (or end) of a cassette tape, or digital numbers ticking off the seconds from zero, music brings Christine happiness, ponderous thought, opportunities for almost scientific study, and sometimes a few tears. When she started attending live shows two decades ago, a whole new piece of the puzzle clicked in and she has been hooked ever since.
Related ItemsBob Log IIIChristine MitchellFeatureJake LaundrySpinning WhipsSunset Tavern
← Previous Story Panic! At The Disco’s Emo-Pop Extravagance
Next Story → Biffy Clyro Rocks Hard At The Neptune