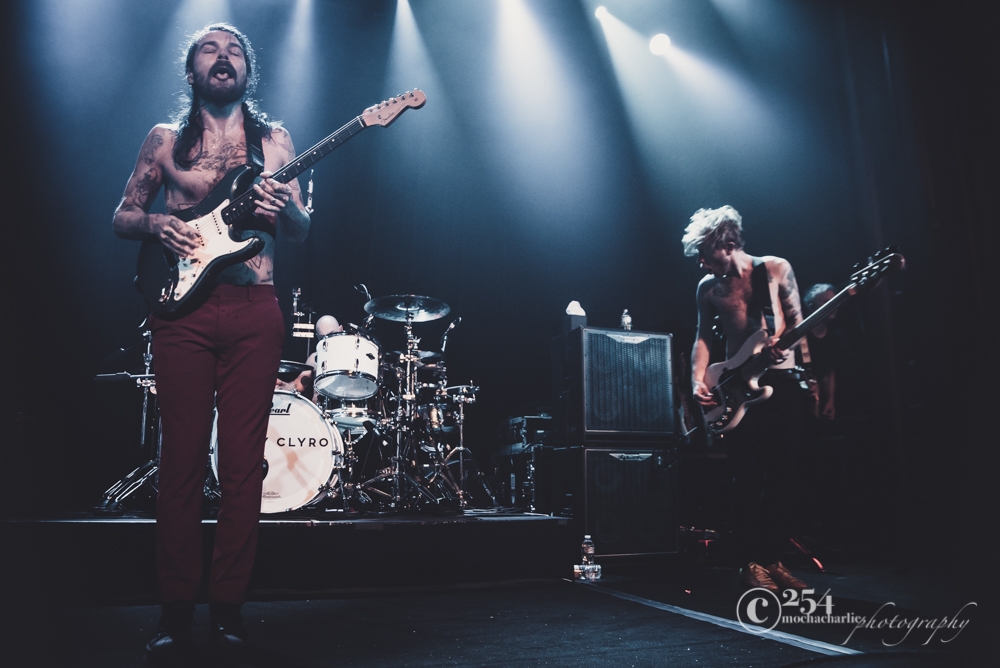 With seven studio albums under their belt, the Scotland based band, Biffy Clyro, continues to bond with their fans and show that there is no signs of stopping. With over a million albums sold, and hundreds of thousands of singles sold since they began in 1995, they have amassed a heavy fan following across multiple continents, countries, states and cities worldwide.

Last week, with many fans making the trek to the Neptune Theater from near and far outside the Seattle city limits, they played a huge selection of their catalog: no need for a crazy light show, or theatrics – or (apparently) shirts.  Fans sang together, swayed together, and held on to every breath that the trio belted out from the stage. There is something about being in a venue, experiencing the elation of seeing musicians performing with such passion. For a rock show,  the vibe was easy going, yet you could feel the high energy throughout the room.

It so happened that there was a group of super fans in the audience for this show that flew down from from Alaska for the sole purpose of seeing the show. After 15 years of being fans of Biffy Clyro and having never seen them live, they made a collective decision that for this tour, they would use their PFD (Permanent Fund Dividend) in order to pay for their tickets and trip. They were the ultimate fans. Watching musicians perform their craft seamlessly, and with full vigor on the stage is always something that can give those in the audience a great show to remember. Biffy Clyro does just that. Seeing fans’ reactions, (including those who waited 15 years to be there), seeing their camaraderie amongst each other, and the interactions with other fans was a remarkable way to see a rock show.

Biffy Cyro will continue to rock in multiple US cities this spring, with Georgia band, O Brother, joining then through the middle of January.

Living Is A Problem

Name Of The Wee Man

Who’s Got The Match?

Mocha Charlie is an amazing photographer who has a real passion for music. She covers and shoots several shows per month in and around the region. She a brilliant photo journalist but most importantly, she is also a mother who does her best to balance out her life and live it to the fullest. Mocha Charlie uses her passion and talent to support the community, her friends and family any way that she can.
Related ItemsBiffy ClyroFeatureLive MusicMocha CharlieO BrotherRock BandsScottish BandThe Neptune Theater
← Previous Story Bob Log III: Slide Guitar Ride
Next Story → Ends of the Earth Tour comes to Seattle