Home / Artist Spotlight / An Interview with Frank Bello of Anthrax

An Interview with Frank Bello of Anthrax

By Mike Baltierra on April 14, 2017@baltierraphoto 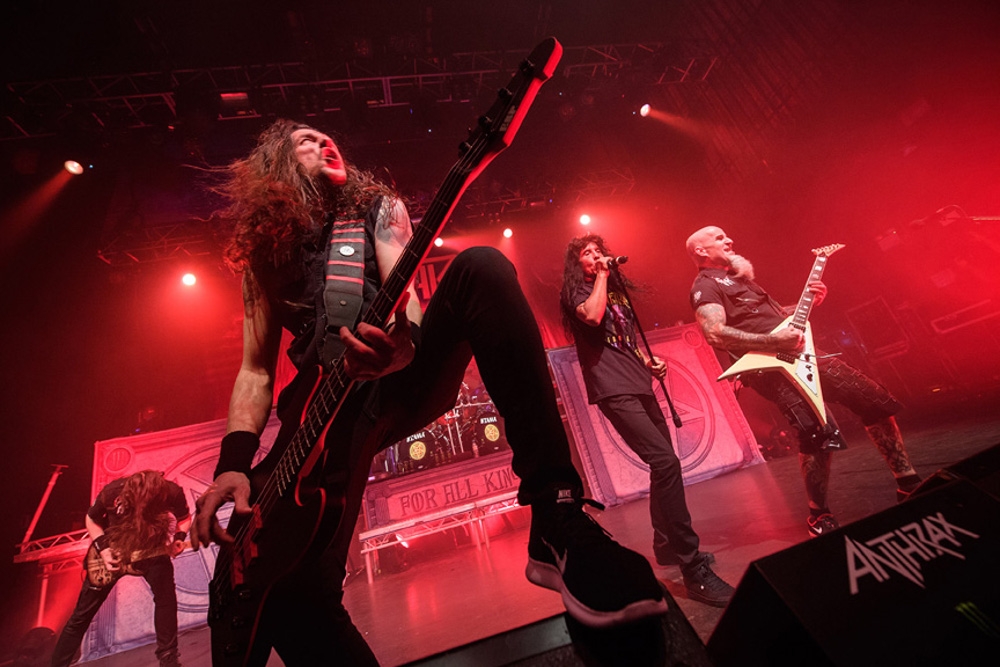 American thrash metal band Anthrax are currently touring across the United as part of the KillThrax Tour, which features co-headliners Kill Switch Engage as well as support acts The Devil Wears Prada and Code Orange. The tour makes a stop at the Showbox Sodo in Seattle on April 25th.

SMI: Thanks for taking time to speak with us today. First off, can you talk about Anthrax’s signature beer, Wardance Pale Ale? Who came up with the idea and will there be national distribution?
Bello: Of course! It’s my pleasure! Well, it’s no secret that we all love beer and our favorites are usually found when we’re touring outside of the United States, particularly in Europe. So we teamed up with Butternuts Beer & Ale to help us come up with what we envisioned what a beer we all like to drink would taste like. Lots of taste testing lots of back and forth. Butternuts did a great job! In order to get out it nationally, we just send it out blindly! We need everyone to go into their favorite bars and ask to get it! Believe me, you’ll love it! Can’t just have one!

SMI: Anthrax is the first heavy metal band to have their music played in outer space. NASA selected your cover of Joe Walsh’s “Got the Time” to be used to wake up the Mars Rover. What does that achievement mean for you and Anthrax?
Bello: It’s the obscure things that make life interesting and worth living. It’s pleasant to know that after doing Anthrax for so long, to know that there are Anthrax fans at NASA and to have our music used….we’re both thankful and honored. Hopefully there are some Martian’s out there rocking out to some killer earthly rock and roll music!

SMI: Did you think that collaborating and touring with Public Enemy back in 1991 would have such a profound impact and or even think that to this day, that collaboration is still just as influential?
Bello: We were told by lots of people that it wouldn’t work. We also go against the grain and have done what we felt was right, in that moment in time. There were also those who said that different genres couldn’t work well together. But we did it, we recorded “Bring the Noise” with Public Enemy and we toured and it was HUGE! It was just amazing seeing everyone who loved different genres of music, coming together and having a great time! Everyone getting along, singing, head banging, jumping around, moshing….Even to this day, Chuck D will come out to an Anthrax show when we’re touring and we’ll go check out a PE show when their playing. We’re still great friends and fans of each other’s bands and we will continue to support each other.

SMI: Your latest releases, For All Kings and Worship Music, are amazing. Over time, it seems that most bands that started the thrash movement seem to get better with time. What do you think is attributing to this?
Bello: Man, thanks for the compliment and thanks for noticing. As with anything else, you do something over and over and things become more natural or over the course of time, you get better at your craft. When I first joined the band, I was only 17. So here it is 30 some odd years later, we’re in a good spot as a band. We’re in a good spot as writers and we know what we want to write. We write songs that we want to hear if we’re just fans discovering new music or music we would want to go see performed live. I honestly believe that we as a band have found a new resurgence after the Big 4 – you know, the shows we did with Metallica, Megadeth and Slayer. We are getting new fans who may have any first heard of us at the Big 4 and now they are coming out in droves. It motivates is to not only put on great shows but to put out great albums. We have to thank our fans, new or longtime fans, for that.

SMI: What do you say to those who feel that you’re playing too many covers during your live set?
Bello: Sadly you can’t please everyone. There are those who don’t want to hear as many covers, but as soon as we don’t play “Anti-Social” there will be an uproar and we won’t hear the end of it! So it’s a catch 22.

SMI: Are you still involved with the Little Kids Rock project?
Bello: Yes when I have the time, I do get involved. Little Kids Rock provides music classes and instruments to under-served school children. It’s great being involved with music programs with children who may not have to opportunity. I feel it’s like passing the torch, to keep music alive. I believe that everyone should have the opportunity to learn and play music.

SMI: How did the partnership come about with Monster Energy?
Bello: They are great people and they have been doing great things with sports and lately with music. Their Java drink is amazing – not trying to sell you on it LOL! But they believe in us. They reached out to see if we wanted to work together and it’s been amazing. An energy drink company and a high energy band goes hand in hand. They have been good to us and we are good friends with them and we hope this partnership lasts a long while.

SMI: Did you ever think when you joined the band that Anthrax would be around thirty plus years later?
Bello: No, I didn’t think that far ahead. I don’t think any of us did. We have been fortunate to be able to do this for a living, to take care of our loved ones who depend on us. To be able to continue to make music that people love and are willing and wanting to come see us live, has been tremendous. It’s great seeing fans who have been with us since the beginning at shows with their kids, again passing the torch, or new fans who have recently discovered us. Again, we do feel that everything has come full circle since the Big 4 and things couldn’t be better. We’re all very happy.

SMI: What aspirations or dreams did you have when growing up? In other words, what did you want to be when you grew up?
Bello: A baseball player. I love baseball. But, seeing KISS at the age of thirteen kind of ruined that LOL, then I wanted to be a musician. I knew I wanted to do this. It’s as if it was meant for me to do this. I have no regrets. I am happy, and life is good. Enjoy it while you can, because we’re not promised tomorrow.

SMI: Thank you again for talking time today to speak with SMI. We’ll see you on April 25th in Seattle!
Bello: You’re welcome! And thanks for being longtime fan. Much appreciated.