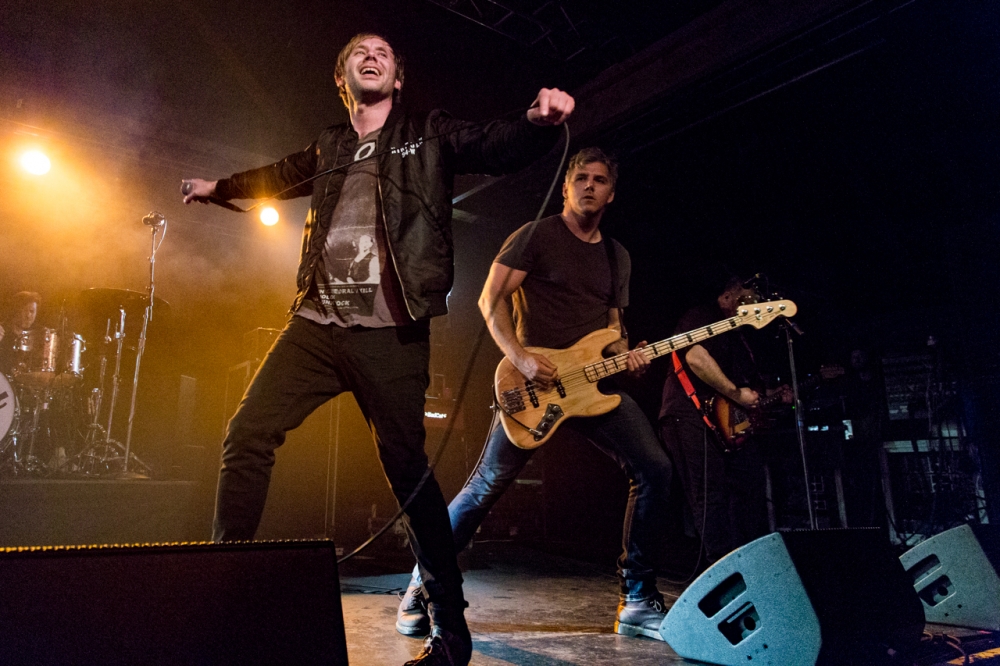 Post-hardcore band Thursday are doing what they want, and for now, that means getting back on the road to tackle live stages with heavy-hitting tracks. They stopped by Seattle’s Showbox SoDo and did just that, with dedicated fans in the house that hopefully encouraged them enough to know they’re still an influential part of the scene.

Memphis-based rapper, record producer, and genre-bender Cities Aviv opened the show with experiments in beat-making that had the coat check girl getting her dance on. Then post-hardcore five-piece Touché Amoré took the stage, drummer Elliot Babin removing his shirt as he stepped behind the kit.

The crowd that showed up for the night was clearly in the know about all the openers, and they shouted the lyrics right back at the band. Just a few thrashing tracks in, TA’s singer Jeremy Bolm asked the house lights to be turned up, noting to the crowd that it would help with his anxiety. But given his energetic, passionate delivery, you would never have known. The mosh pit started early and just grew and grew.

Looking like the guys next door, Basement, over from the UK, were unassuming but had the crowd singing from the get go. More emo than screamo, which took it down a notch between bands, they still had everyone pumping their fists in the air with the sound of teen angst against fuzzed guitars.

And then there was Thursday, a band with 20 years of history. Having just reunited last year, and with no new material under their belts yet, the band delivered an exceptionally solid set for the dedicated fans. Vocalist Geoff Rickly joked that he “was about to say we’re gonna play some old shit tonight but everything is old at this point.” But he did so with a giant smile on his face, clearly enjoying being back on the stage.

The crowd surfing commenced, fans spilling over the front barricade only to run to the back and do it again, while the band slammed through powerful favorites like opening track, “For The Workforce, Drowning,” and “Autobiography of A Nation.” After dedicating it to the other bands playing with them, the band kicked off “A Hole In The World,” and Rickly climbed down against the barricade to shout in the fans’ faces.

“Signals Over The Air” was dedicated to “all the empowered women in here tonight” and got massive response from the crowd. Rickly’s performance had him jumping off the drum riser and holding the mic cord in his mouth. He also noted this was the first tour he’s ever tried to do sober, during a sentimental moment in the show that made it even more endearing. A killer encore kicked off with “War All The Time,” during which Rickly held out the mic stand and let the crowd soar.

For anyone who might be wondering if Thursday still had anything to offer, this show proved there was no question. Hopefully, there’s more to come, but if nothing else, the powerful nostalgia of their sound and passionate delivery is worth the ticket any day of the week.

Thursday Set List
For The Workforce, Drowning
The Other Side of the Crash/Over and Out (Of Control)
Cross Out the Eyes
Beyond The Visible Spectrum
Autobiography of A Nation
Counting 5-4-3-2-1
A Hole In The World
Signals Over the Air
Jet Black New Year
This Song Brought To You By A Falling Bomb
Division St.
No Answers
Understanding In A Car Crash
Encore
War All The Time
Turnpike Divides