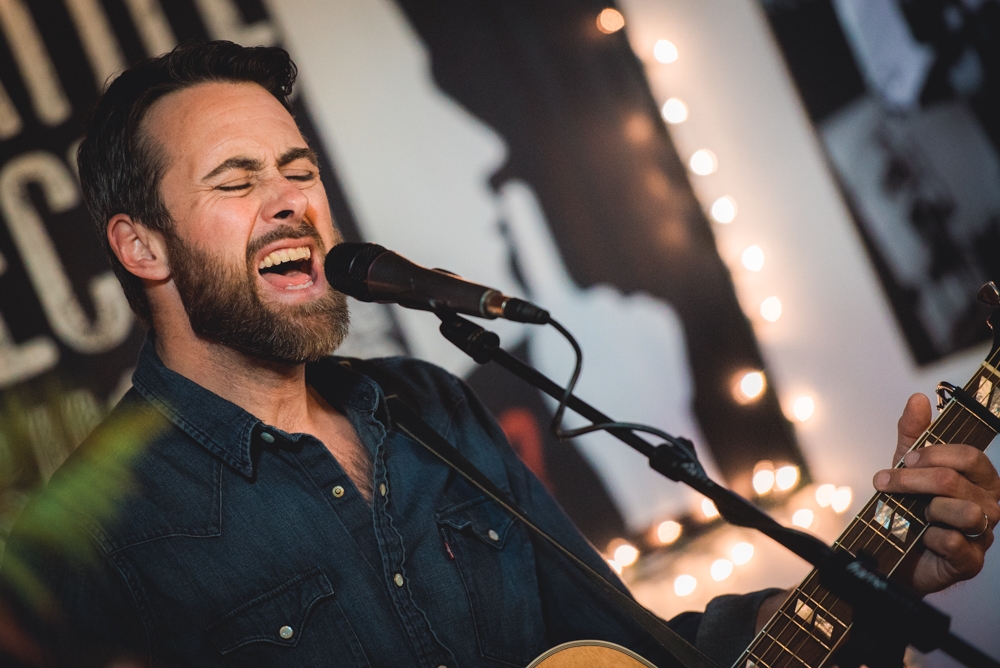 More than one 150 people packed a loft space in Seattle’s Capitol Hill neighborhood this past weekend for Seattle Living Room Shows only secret event for the month of April. They had secured the trio of TFDI to play throughout the night which included a special after hours rooftop acoustic performance. This month marks a nine year celebration for SLRS and their founders, Kristen and Carrie Watt. The evening began with a special nod from sister to sister and a piece of framed history.

It takes hours of planning and networking to tie things all together when it comes to producing what the Watt sisters have been able to do over the past nine years as owners of SLRS/SSS. They seem to leave no stone left unturned, especially when it comes to acknowledging the hard work and dedication that they (and all of the volunteers and production crews, and the dozens of artists) have put in to each and every show. Nine years ago, they started with a vision of bringing in musicians and allowing fans a space to experience music in a “talk-free” zone, where musicians and the music could be heard in smaller, more intimate settings.

Each musician and band that have played over the years have special meaning to the Watt sisters; however, there will always be one that stands out. Jay Nash (one third of TFDI) played the very first Seattle Living Room Show, which just so happened to be in an actual living room. It was in Carrie Watt’s living room where everything all came together for the first time. Kristen Watt had saved a ticket stub from that first show, and prior to TFDI taking the stage, she had Jay Nash sign that ticket, which Kristen presented to Carrie before music filled the room. It was a heartfelt and endearing gesture, and complimented the performance that was still to come.

In 2009, musicians Jay Nash and Tony Lucca chose to tour together, and Matt Duke was added as an opener. They had such great chemistry, camaraderie, and similarities in musical style that they chose to create a band where they could both be themselves, and become another entity all together. They wanted to form a band where they could bring unfinished solo projects that needed a little something more, where they could elevate those songs by adding multiple guitars and vocal harmonies, and a platform where they could produce completely new collaborative tunes. So why not get together and totally f’in do just that? Thus, TFDI, “Totally F’in Doing It”, was born.

Getting together to produce their first EP was a struggle, but their desire to work together set the pace. With Lucca living in Nashville, Nash in Vermont, and Duke residing in Philly, they found a studio that fit their needs just outside of Chicago. They made it work, and it was a labor of musical love and genius. Although each had defined their individual solo careers and each had a fan base they had worked hard to create, they were still promoting their new project from the ground up. They all continued to thrive in their personal lives and solo careers over the next few years, coming together to perform here and there.

Their desire to create even more collaborative music finally came to a head in 2016, and after months of coercing (from Nash) to head up north when the weather was good, the group finally came together to record their sophomore EP in Nash‘s home studio in Vermont last December. Although recording could have began earlier in the year, the coordination of personal calendars limited their time, so the choice to head up north…in December…in the snow, and on some days, 10 degrees below zero was a necessary evil. They dug deep and came up with enough material for the EP, Beggars & Ballers.

Finding time to promote the new EP was even more daunting. All three men are married, with kids, and have numerous other priorities that had them scrutinizing their calendars very closely. Duke, who is currently enrolled in nursing school, attends courses for three months and then gets a month off, so coordinating with that was imperative. They finally committed to a month long tour this April, wrapping up this week. Their Seattle performance marked the third time that both Nash & Lucca had played for a SLRS crowd. Their performance was split up into group harmonies of their TFDI material, as well as a few solo performances, where each member stood at the mic to sing a few of their more popular songs. After a standing ovation, they played an encore set, and for those who stayed late after the show, they treated a select few to a short acoustic rooftop set under clear skies over Seattle.

Mocha Charlie is an amazing photographer who has a real passion for music. She covers and shoots several shows per month in and around the region. She a brilliant photo journalist but most importantly, she is also a mother who does her best to balance out her life and live it to the fullest. Mocha Charlie uses her passion and talent to support the community, her friends and family any way that she can.
Related ItemsFeatureJay NashMatt DukeMocha CharlieMusicSeattleSeattle Living Room ShowsSeattle Secret ShowsTFDITony Lucca
← Previous Story The Ballroom Thieves: SSS Goes Back To The Living Room
Next Story → Seattle Secret Shows Sounds off @ SONOS