By Mike Baltierra on April 28, 2017@baltierraphoto 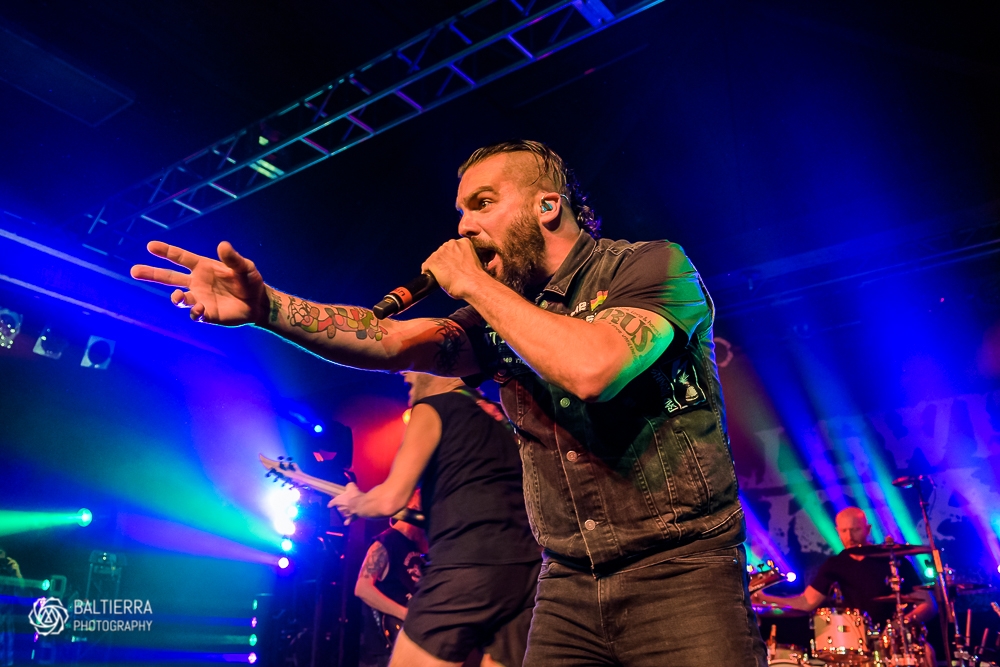 The North American Tour co-headlined by Killswitch Engage and Anthrax, dubbed the KillThrax Tour, made its way to the Showbox Sodo in Seattle, which was packed to the rafters with people coming out on a work night to get their fix of metalcore and thrash metal.

Metallic hardcore head-bangers Code Orange played a quick 25 minute set to get the crowd warmed up. The band is touring in support of their latest release, Forever. The dark heavy sound coupled with the dark atmosphere and low lights on stage made for a heavy, quick punch to the gut to get the evening started.

Chicago’s The Devil Wears Prada hit the stage next and proceeded to tear through a seriously heavy 30 minute set that mainly focused on their latest effort Transit Blues. The band was full of energy, delivering a solid performance that made their fans very happy, as well as winning over some who may have not heard of the band previously.

Iron Maiden’s “The Number of the Beast” blasted through the PA system, letting everyone in attendance know that it was almost time for New York’s thrash metal kings, Anthrax, to take the stage. The houselights went down and “I Can’t Turn You Loose” (aka The Blues Brothers Theme song) by Otis Redding came over the PA. As the band (vocalist Joey Belladonna, bassist Frank Bello, drummer Charlie Benante, rhythm guitarist Scott Ian, and lead guitarist Jonathan Donais) made their way to the stage, the crowd was fired up. The band ripped into the title track of their 1987 classic release, Among the Living. The place the erupted as the band then tore into “Caught in a Mosh,” which set off a moshing frenzy with crowd surfing in full force.  Although Anthrax played a set that mainly focused on their last two releases, For All Kings and Worship Music, the band also threw in classic fan favorites, such as “I am the Law,” “Madhouse,” and ending the night with the always crowd pleasing “Indians,” which had the crowd not only singing the entire song, but also produced the largest mosh pit of the evening.

Metalcore icons Killswitch Engage closed out the evening. The crowd, still fired up, showed no signs of slowing their frenzied crowd surfing and moshing. KSE, which consists of vocalist Jesse Leach, bassist Mike D’Antonio, guitarists Adam Dutkiewicz and Joel Stroetzel, and drummer Justin Foley, put on an awesome show. The band sounded superb, playing selections that spanned their entire catalog, not just focusing on their latest release, Incarnate. With D’Antonio running around and performing head windmills, Dutkiewicz and Stroetzel running back and forth from each side of the stage and Leach commanding the crowd, at times leaving the stage to join the fans in the front row, the band played with ferocity and intensity. The crowd showed their appreciation with continuous head banging, fist bumping, and singing along with Leach as the band belted out “Hate by Design,” “My Last Serenade,” “A Bid Farewell,” and “Rose of Sharyn” before closing out their set with a cover of Dio’s “Holy Diver.”